Sean Chiplock
[view]
Zakson is an enemy boss character in Fire Emblem Gaiden and its remake, Fire Emblem Echoes: Shadows of Valentia. He is the boss of the first map in Chapter 3 in Alm's route. In the original Gaiden, Zakson has no portrait and no dialogue.

Owing to the minor role he plays, Zakson is not well-developed. However, several aspects of his character can still be gleaned based on the lines he speaks. For one, Zakson can be considered a prideful individual as he tends to taunt his enemies based on their appearance before testing their strengths. A fact is shown when he calls out to the Deliverance that they should be in fear for having a small band of troops rising up against a powerful empire, and takes it upon himself to convince them about shamelessly wasting their lives. One can see that he still refuses to admit defeat when he mumbles about during his final breath.

“You don't look half as scared as you ought. Don't you value your lives? It's time you had the fear of death put back into you!”
—Zakson's battle quote
“No... I'll not surrender... Not like...this...”
—Zakson's defeat quote
“How's this?!”
—Zakson's eliminating target quote 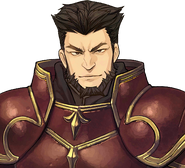 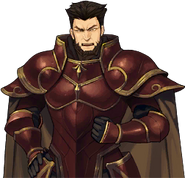