Wyvern Rider
[view]
“If I were to become the strongest man in Bern... we, who had nothing, would be able to obtain everything we wanted!”
—Zeed's motivation

Zeed is a Wyvern Rider of Bern, leader of "Zeed's Wyvern Squadron" and older brother of the mage Jemmie. He originates from the Fire Emblem: Hasha no Tsurugi manga and has several encounters with its protagonists. Although he fights for Bern's campaign to conquer Elibe, he is capable of kindness, even to his enemies.

As a child, Zeed lived as a poor and homeless orphan with his younger sister Jemmie. Everyday was a struggle for survival as Zeed fought to provide for his sister, because of this, he cares for her deeply for her. Some time later the two were picked up by Bern's army and were trained to fight and kill for Bern, with Zeed eventually proving skilled and capable enough to lead his own Squadron of Wyvern Riders called "Zeed's Wyvern Squadron."

Years later, Zeed would take part in Bern's campaign, working directly under the Wyvern General Narcian of Bern. He first encounters Al, the manga's protagonist, when he and his men attack Castle Ragna. Here he manages to get a hold of Tiena, the princess of Tania, and despite Al's attempts to stop him, gets away. Al however was able to damage the wing of Zeed's wyvern, forcing him to land not far from the castle, this giving Al and Gant, a knight of Tania, a chance to catch up to him.

Guided by Celdia, Ragna's princess, Al and a heavily wounded Gant are able to catch up to Zeed and confront him. Zeed and Gant take part in a one on one dual, but due to Gant's wounds, he is no match for Zeed and it is only with the aid of Al that Zeed is forced to flee.

Zeed is next seen at the Western Isles, where he introduces Arcard, a lord of Etruria overseeing it's mining operations, to his younger sister Jemmie. He informs Arcard of her lack of experience in real battle, but speaks highly of her magical prowess. He leaves both her and Bern's secret weapon, a dragon named Ain, behind with Arcard and takes his leave. He soon returns to rescue his sister after she attempts to jump to her death for her failure to defeat the Lycian League. While she apologizes for her failure, Zeed reminds her that it was simply a test, though he is still unable to believe that Ain was defeated.

Zeed is then shown at the Old Castle in Missur after Bern's army had arrived and taken it from the Mage General of Etruria, Cecilia. He is told by a desperate Narcian that he will take his men to find the hidden village of Arcadia in the Nabata Desert, or otherwise face death for his failure. He begrudgingly agrees to go while Narcian heads to the Etrurian capital of Aquleia.

While searching the desert, Zeed realizes the hopelessness of the situation, surmising that he and what few men he has will either die in battle or be executed should they flee. Not wanting his men to die for Narcian's sake, he orders that they flee and live their lives however they wish, opting to face death in their stead. Before long, he happens upon Tiena carrying an unconscious Al who is struggling to make in through the desert and after reflecting on how his sister would look down on him were he to abandon a lady in need, decides to help her. While Zeed is able to fly them some ways to Arcadia, they are stopped by the dragon child, Fae, who attacks them in her dragon form due to her hatred of wyvern.

Zeed wakes up in the middle of the desert, having been separated from Tiena and Al, though he assumes that they were doing well enough. He eventually happens upon the bodies of his men. Believing he had been tricked by Tiena and that it was Lycian's who killed his men, he returns to Bern with a newly found drive to fight.

He eventually returns to Bern, but is informed that his sister had been dispatched to take part in the battle of Aquleia, and while he heads there himself, he arrives after the Lycian League had already retaken the city. Finding a severely wounded Narcian, he questions him on Jemmie's whereabouts, but is told that she had died during the battle. Furious that his sister had died fighting for the sake of Narcian, Zeed stabs him with his lance, killing him. He then weeps for the loss of his sister.

Zeed returns once again to Bern, where he requests that the Wyvern General Murdock allow him to lead the vanguard in the final battle so that he may avenge his sister, Murdock accepts, recognizing Zeed's passion. On the day of the battle, fueled by blood lust and a desire to avenge Jemmie, Zeed is able to break through the defenses of the Lycian League army. Along with the Bern's dragons, he is able to halt the Lycian advance, however this is short lived as Tiena uses the power of the legendary weapon Aureola to obliterate the dragons. Taking notice of this, Zeed flies to Tiena's location and confronts her.

Upon being confronted by Zeed, Tiena is shocked to see him fighting for Bern again. Zeed attacks her but Gant arrives in time to shield her from his lance. Believing Gant to be dead, Zeed tells Tiena that they killed his sister, admonishing himself for having ever trusted her. As Zeed prepares to go for Tiena again, Gant gets back up to Zeed's shock and the two take part in another dual. Though Zeed once again seems to have the upper hand, even preparing to finish him off, Gant is able to use all his strength to land a powerful blow on Zeed. Zeed makes one final attempt to get up, but his strength fails him and he collapses. As he lay dying, he sees his sister one last time and she tells him that they no longer need to fight anymore. Accepting that so long as the two of them were together, neither he nor Jemmie would need anything else, he dies, leaving Tiena to mourn him.

Growing up poor and with no one to support him, Zeed needed to be ruthless for the sake of he and his sisters survival. This meant being willing to take and do whatever he needed in order to ensure their safety and well being. This attitude, coupled with being taught by Bern's army how to kill, forged him into the kind of man who holds little concern for the lives of most, particularly those who he deems are beneath him. He has few qualms with taking the lives of anyone who is an enemy of Bern and did not even object to his sister killing soldiers of Etruria, with whom they were allied.

That said, Zeed is not a truly cold hearted individual, he even holds a deep disgust for Narcian and how he callously uses his men. Most obviously he cares deeply for his sister, and wanting the best for her, he gifts her things when he can, such as her prized circlet. He also greatly values her opinion of him, as the thought of her looking down on him due to not helping Tiena in the Nabata Desert caused him to change his mind. It should then come as no surprise that upon learning of her death, he was heart broken. Zeed also values the lives of his men over his own, as he readily accepted assured death by execution so long as his men were able to flee and live their lives freely. And as previously stated, he was willing to help even his former enemies cross the Nabata Desert to no benefit of his own.

After Jemmie's death and the death of his men, Zeed, obsessed with revenge became even more ruthless than he had been before. He refused to listen to Tiena's words, believing she was trying to trick him, and was fully intent on laying waste to as many member of the Lycian League army as he could, even at the risk of his own life.

Heading his own squadron of Wyvern Riders, Zeed is a skilled combatant and leader. Alone he forced Al and Gant to work together to force his retreat and managed to break through a line of archers while flying directly into their fire.

Zeed is illustrated in the trading card game Fire Emblem Cipher with the following cards: 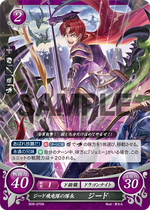 Zeed as a Wyvern Rider in Fire Emblem 0 (Cipher).

Zeed before he kills Narcian.

A flashback of young Zeed and young Jemmie.