Map 5: Beyond The Legend

“The pain was nothing compared to what they did after that. I was forced to watch the brother I'd protected receive the exact same punishment. He died because of me. They brought my older sister in after that. I couldn't bear the screams anymore. I begged my torturers for forgiveness and swore eternal loyalty to Gerxel in order to protect them. Call me a coward if you want. Any pride I might've had as a knight was abandoned a long time ago.”
—Zeek, in a conversation with Kate

Zeek (ジーク Jīku, fan translated as Zieg or Sieg) is a playable character from TearRing Saga: Utna Heroes Saga. He is a dark knight of the Zoa Empire who accompanies Gwenchaos during his attack on the Temple of Mars. During the resulting battle, he defects to Runan's army, claiming to be a knight of Barge.

If Zeek is defeated during the time that he is playable, he will be saved by Karla.

Zeek is the younger brother of Karla and the uncle of Shigen. He was born into a family of nobles and lived a comfortable life until he was four years old, when Reevans attacked his home because of his mother's Zoan heritage. While their parents and three eldest sisters were burned at the stake after being forced to confess that they were servants of Gerxel, Zeek and Karla were enslaved instead because they were children. Although Karla was saved by Gwenchaos on the day of her execution, Zeek remained in slavery for twenty-five years. During this time, he was brutally tortured and received scars as a result, but managed to survive because of his anger towards Reeve and prayers to Gerxel. Three years prior to the game's events, he was freed and joined the Zoa Empire as a dark knight.

In his first conversation with Kate, Zeek reveals his scarred back to her and professes that he was enslaved by the Zoa Empire, where he eventually became a dark knight in order to protect his family. He also claims that his scars resulted from a punishment that he received for standing up in defense of other slaves. Despite his attempts to keep his distance from Kate, he allows her to stay by his side at her insistence. Over time, the two of them fall in love, which causes him to become distracted from his mission of spying on Enteh.

Eventually, Zeek betrays Runan upon receiving orders from Karla to return to the Zoa Empire. He makes his next appearance in Map 26A, during which he leaves Rentzenheimer behind to die because Gwenchaos deemed him as unworthy of salvation. He also provides some soldiers to Rentzenheimer, but only to cover up his own retreat. Later in the game, he leads an army of dark knights into a battle against Holmes's army and ends up being captured. Before Holmes can punish him for his betrayal, Zeek escapes with either Karla's or Kate's help, depending on which army that the latter is in.

Regardless of which army that Kate is sent with after the third route split, she eventually reunites with Zeek. When they meet again, he asks her to join him in the Zoa Empire, which confuses her because she is unaware that he betrayed her allies earlier. Before Zeek can reveal the truth about himself, Nefka appears and informs Kate about it. Afterwards, Nefka kidnaps Kate and tells Zeek that he should not object because doing so would be a traitorous act.

Towards the end of the game, Zeek receives orders from Karla to stop Runan's army from interrupting the resurrection ritual of Gerxel. He ultimately dies in the resulting battle. If Kate defeats him, he apologies to her as he dies.

Zeek is very loyal to the Zoa Empire and follows the teachings of Gerxel, whom he worships. He always obeys the commands of his sister and other members of the Gerxel Church with higher positions than him. Unlike many of the others in the church, he believes that the Zoans and the descendants of the Jugdian settlers could co-exist if the latter would stop persecuting the former. He also thinks that the Gerxel Church's actions are done solely for self-defense. He strongly disagrees with Nefka's views regarding the ordinary dark knights and compares him to their enemies for discriminating. Due to his dark past, he harbors a deep hatred of Reeve and wishes to have his revenge by killing its people one by one.

During his time in Runan's army, Zeek keeps his distance from everyone except Kate and tends to avoid events such as banquets. He is widely suspected to be a traitor, which is only furthered by Raffin not recognizing him from Barge. After he defects back to the Zoa Empire, he is torn between his loyalty to his country and love for Kate, as he never truly comes to terms with either.

He first appears as an enemy unit in Map 5 (wearing a helmet that hides his face). To recruit him, have Runan speak to him or allow him to speak to Runan. However, he later leaves the player's army before Map 24, and will appear again as a non-recruitable enemy unit in Map 31 and the boss of Map 39.

Zeek is possibly the most overpowered character in the game, matched only by units like Raffin, Narron and Yoda. His bases outclass that of the majority of playable units with the sole exception of an early promoted Narron, and possibly Raffin, and his growths are without a doubt the best in the entire game - no holds barred. He has an incredible selection of skills, and his class suffers little to no movement costs from almost any terrain; a noteworthy example being his lack of movement penalty in forests. He is also able to wield the incredibly powerful Devil Spear without fear of it ever backfiring.

However, many players choose not to use him despite his blatant and abundant advantages because he leaves the player's army before Map 24, and reappears as a boss later with the same stats. This is not advised because with the various powerful units the player receives such as Yoda and a promoted Vega and Shigen, in addition to various useful items like the Brave Sword and the incredibly useful Gatling Bow, killing him even if he caps all of his stats will often not be too difficult. This is due to him being weighed down extremely by the rather heavy Devil Spear and his lack of standing on defensive terrain. While he will be comparable to bosses such as Ernst or Barbaross if he caps all of his stats before leaving, he will be manageable, and should not pose an unbeatable threat to the player's army.

Should he reach certain defensive thresholds [HP+ (Def x 2) > 84], the player may opt to send Lyria over to Holmes route to make the kill more feasible. Yoda is generally sent to carry out this role given his bases may be higher than a trained Shigen or Vega.

Given that killing him is not too much of an issue later on, players are free to use Zeek as they please; he will easily kill almost all enemies in either one round or one hit. He can also fight with cheap and effective weapons like the Short Spear to reach places where the rest of the player's cavalry cannot reach with relative ease, without too much fear of death due to his incredible bulk and HP. All in all, Zeek is an incredibly overpowered unit, and is well worth the use that the player gets out of him, even if it is ultimately fleeting.

Zeek: Is that you, Kate? I see you managed to escape...
Kate: Zeek... You betrayed me...! I will never forgive you!
Zeek: This was the only way it could end, Kate. Now, come! Let's finish this!

Artwork of Zeek in a formal outfit 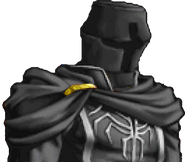 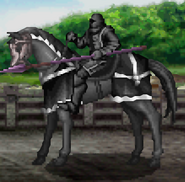 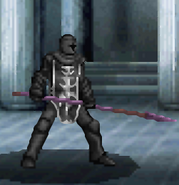