Wyvern Rider
[view]
“If the Lycia Alliance Army's leader would allow it, I want to go with you. I want to see the princess' beliefs that moved you so.”
— Zeiss speaking to Melady when being recruited

Zeiss is a playable character from Fire Emblem: The Binding Blade. He is loyal Wyvern Rider of Bern and the younger brother of Melady. He is a subordinate of General Narcian.

However, he is framed by Narcian for conspiring to give information to the Lycian army, but Galle helps him hide from the fraudulent claims. At first, he is shocked upon hearing that his sister has turned traitor, but he is convinced by Galle to talk things over with her before jumping to conclusions. Upon speaking to Melady, Zeiss is persuaded to switch sides. After the war, he helps Queen Guinivere rebuild Bern.

His wyvern is named Levrey.

Zeiss joins in a complicated Chapter in an area easy to recruit him in, however his stats on Normal Mode, though by no means awful, leave something to be desired. His hard mode bonuses, however, are as beneficial to him as Melady's are, starting with a whopping 19 strength at level 7, as well as 39 HP and 15 defense. Unfortunately, when one sees his stats, they'll immediately realize that he's nowhere near matching units like Melady or Perceval in terms of combat, despite his ridiculous Hard Mode bonuses. This conclusion is a bit unfair to Zeiss, as Melady and Perceval are likely to be two of the best combat units the player has at that point in the game, but it is important that the player does not expect him to be as self-sufficient as his sister. He joins a good bit under leveled, but can catch up if fed enough. While his HP, Strength, and Defense are amazing for his level and not bad for his join time, his Speed and Skill are a bit disappointing.

His base Speed, while decent given his low level, is too low to double anything but the slowest of enemies. His 35% growth will also make it hard for him to consistently grow in it. The real nail on the coffin for him is his Lance rank of D. This means he can't use Killer Lances yet, which is a pain for him. This means that he's either stuck with the weak Iron Lances or the inaccurate and heavy Steel Lances. If the player still has Gant's Lance, he can make decent use of it, as his con is just high enough that he doesn't lose any speed. His inability to use Killer Lances makes his accuracy a lot lower than his decent base Skill would imply. As he gains levels, though, his skill will grow and reaching C in lances will most likely make his accuracy issues disappear.

Zeiss should promote as early as possible. Given the fact that he joins in the chapter with a Secret Shop that sells promotion items, he luckily never has to worry about when he can promote. While it's tempting to get him to Level 20 to get his HP, Skill, and possibly Speed and Defense to high values before promoting, promotion fixes multiple things he struggles with. It brings his Lance rank to C, and gives him a large HP boost alongside a respectable +2 to everything else (except for a +1 for Resistance), which goes a long way in fixing his accuracy issues and adds to his already-impressive durability and attack power. He also gets the accurate swords. Unless the player is unlucky, Zeiss should have around 12 speed by Level 10, which will be boosted to 14. This, sadly, still isn't enough to double consistently, but his continuously increasing Strength will often make it so that any enemy he's fast enough to double will be one-rounded. A crit from a Killer Lance should also enable to one-shot most enemies.

While it may be both hoarding and favoritism, using one (or even both) of the Speedwings is an option, as Zeiss is often in an awkward place where he's fast enough to avoid worrying about getting doubled by everything but too slow to double reliably, which is often exactly the unit that can make the most out of a Speedwing. His sky-high Strength also makes the most out of reaching higher speed thresholds.

Thankfully, there is a conveniently placed Arena in the following chapter regardless of route. If the player isn't playing for Tactics or completing chapters in fewer turns in favor if higher experience and power, Zeiss can easily be trained there and eventually become on par with Melady. He should easily max out strength before promotion on hard mode, while possibly maxing out skill with some notable buffs in HP, defense, and speed. And after promotion, he could have over 50 HP, as well as 18 speed and 20 defense on average. And as a Wyvern Lord, he will easily max out strength and has good chances of maxing out HP, skill, and speed as well. And defense could also reach the mid 20's surpassing Melady.

Combat-wise, an annoyance for Zeiss is the fact that his class caps for Strength often reduce his ability to make the most out of his sky-high Strength base and growth. He'll almost always have 22 Strength upon promotion, regardless of how long after Level 10 the player waited. This makes his Strength seem like it dwarfs all other fliers and even most units in general, but Wyvern Lords don't have a particularly high Strength cap, so eventually his growth becomes useless. When compared to the other fliers, Zeiss definitely dwarfs Shanna and Thea in Strength, as well as HP and Defense, but his speed lags behind quite a bit. In the long run, tends to end up being a lopsided Melady. His HP, Strength, and Defense are easily the highest of the fliers, but his Speed is average at best compared to Melady's solid speed and his Luck and Resistance are as bad as Melady's. His good con lets him avoid being slowed down by most lances he'd want to use, but Zeiss with a Silver Lance is still slower than Shanna or Thea with a Silver Lance.

Even ignoring Zeiss's variety of pros and cons as a combat unit, there's one thing that no player should underestimate about him: the fact that he's a Wyvern Rider. With 7 to 8 movement and flight, as well as 14 or 15 aid, he automatically has utility that most units lack. This alone could make him arguably more useful than a plethora of units. His impressive bulk helps him when performing flier duties such as ferrying. He also has enough aid to rescue almost anyone except extremely heavy units like Gonzalez or Douglas. His aid is on par with Shanna and Thea's, which is an advantage over Melady (whose aid is rather low) that he shares with the pegasus sisters.

Overall, Zeiss is far from self-sufficient as a combat unit. He's definitely salvageable, but is often nothing particularly special, especially when compared to powerhouses like Melady and Perceval. However, he's a fourth flier, which gives him utility alongside his respectable combat.

Zeiss - Black Lightning
"Zeiss aided Guinevere to build the new Kingdom of Bern, and he took various leadership positions in the military. Although at first he suffered much criticism for siding with Etruria during the war, his loyalty coupled with Guinevere's assistance gradually earned him respect from his colleagues."

Zeiss' portrait in The Binding Blade.

Zeiss's battle sprite in The Binding Blade as a Wyvern Lord.

Zeiss performing a critical hit in The Binding Blade as a Wyvern Lord. 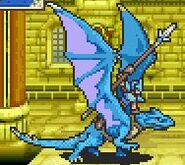