Chapter 7: The Rebellion of Ostia

Zelot (Jerrot in some fan translations) is a playable character from Fire Emblem: The Binding Blade. He is the head of the Ilian mercenaries. Trec and Noah both work for him and respect him. He is the husband of the pegasus knight Juno, and has one daughter.

He makes a brief cameo appearance in Chapter 18 of the Hasha no Tsurugi manga.

The captain of the Ilian Mercenaries, Zelot is married to Juno, and they have a child who he has not met before, because he was always away fulfilling his job as a mercenary in various wars. In Heroes, it's revealed that he met Juno on an Etrurian battlefield. She had been hired by his enemy. Rather than fight, he tried to reason with her and their relationship grew from there.

In Binding Blade, he was requested by Lord Hector to defend Ostia against Bern while Hector was on the front, but the rebellion occurred before Zelot and his crew could get there.

Afther Hector's assassination, he refuses General Leygance's offers to work for the enemies, and still stay loyal to Hector's faction. He runs into Roy’s party while suppressing the rebellion, and joins forces with him if talked to by Trec, Noah, or Roy himself.

In the Ilia route, when reaching Edessa, Zelot discovers that his own castle has been seized by General Murdock of Bern and that his wife, Juno, was kidnaped and kept as a hostage. With the assistance of Roy, along with his sisters-in-law, Shanna and Thea, they rush to free her. When he talked to Juno, for his relief, he finds that she had already decided to fight alongside the Etrurian army.

Fighting together alongside Roy's army, they defeat Roartz, who had hidden in the castle. After liberating Ilia, Zelot, with his wife and in-laws, lead Roy to where Maltet, the Divine Weapon of Barigan, is hidden. After the war ends, Zelot and his wife unify the knights of Ilia and he becomes its first king.

Standing by the beliefs of Ilia, Zelot is both strong and compassionate. Despite being stern and practical, Zelot does not have a solely strict personality. He is applied and works hard to provide for his wife and daughter and to prevent his family falling apart in hard times. Despite sharing the same dreams of his wife Juno, of a peaceful and stable future for Ilia, he is much more pragmatic and cynical in his approach, sometimes even feeling hopeless, fearing that he will never be able to change the mercenaries' lives or bring a better future to his land.

Zelot is very patient when dealing with the younger mercenaries that work under him, Noah and Trec, and he is able to train them to their full potential. He is also a bit awkward when dealing with his sisters-in-law Shanna and Thea.

Description: The lord of Edessa. Leads the Ilian mercenary knights.

Despite Zelot's low growths, he can remain potent up until the Sacae/Ilia split due to his great base stats, class and weapon ranks. His bases are somewhat higher than Marcus, meaning he can make the kills Marcus may struggle with later on. His C-rank Swords enables his Steel Swords, Armorslayers, Wyrmslayers and Killing Edges at base, while his A-rank Lances enables him every non-Maltet lance in the game. Even D Axes is helpful, as it allows him to use the Hammer and Halberd, something Marcus needs some training to manage. In all, he's an early-joining prepromoted paladin, which is a major boon to players, as having a spare paladin is very useful. Even once his combat strength has waned, he can still be fairly helpful due to his natural mobility.

Avowed Groom
Captain of the Ilian mercenaries, who rely on battle to earn their living. He is attending the bridal festival alongside his wife, Juno. Appears in Fire Emblem: The Binding Blade.

Zelot - Leader of Knights (騎士を統べる者 Kishi wo suberu mono)
"Zelot returned to Ilia, where he worked to rebuild the ruined land. He eventually united the Knights' Union of Ilia into the Kingdom of Ilia, and he left his name in history as the nation's first king."

Zelot is illustrated in the trading card game Fire Emblem Cipher with the following cards: 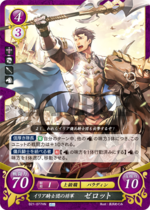 A "zealot" refers to a radical follower of a faith or cause, taken from the Zealots, a 1st century Jewish faction that tried to incite rebellion against the Roman Empire and expel them from the Holy Land.