General
[view]
“Finally, just what I've been waiting for! There's nothing to do out in this damn desert. How am I supposed to prove my mettle if there aren't any enemies to fight, eh? I'll prepare all forces to attack!”
—Zepp

Zepp (ゼップ Zeppu, fan translated as Jeff) is an enemy character from TearRing Saga: Utna Heroes Saga. He is a knight of Canaan and the boss of Map 25. Once he hears that Runan's army is approaching, he orders his men to charge into a battle, despite Simon mentioning that doing so is unwise and instead advising to him focus on defense. He also orders the Condor Squad to stay out of the battle because he does not want it to steal glory from him.

“Give me your best shot, you rebels! I'm itching to put another notch on my blade!”
—Zepp's battle quote 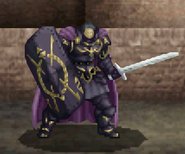