View source
watch 01:21
Who is Zihark?
Do you like this video?
Play Sound

Zeno Robinson
[view]
“I will find out what's going on here! If my country can't save itself, then I'LL save it! But I'll never raise my sword against you.”
—Zihark, to Tauroneo in Radiant Dawn

Zihark is a travelling mercenary born in Daein, and was formerly in a relationship with a laguz of the beast tribe, despite his homeland's prejudice towards the laguz. Their relationship ended due to the stress of being in a forbidden relationship being too much for his girlfriend (she was killed in the Japanese version). Despite the premature ending of their relationship, Zihark felt no desire to enter another relationship, and became a traveling mercenary aiding other laguz in order to honor her memory.

Zihark traveled to Crimea after hearing about the country's efforts to forge ties with the laguz nation of Gallia. In Port Toha, Zihark joined a group of anti-laguz vigilantes to help any laguz escape before the vigilantes could get to them.

Soon after, Zihark meets the Greil Mercenaries when they are trying to board Nasir's ship. Daein troops had blocked the harbor, and Zihark enters the fight alongside the vigilantes. Shortly before the battle, he has a conversation with the vigilante leader to determine if any laguz are with the Greil Mercenaries, causing the leader to believe Zihark couldn't wait to kill laguz. When he sees Lethe and Mordecai, he speaks to them, revealing that he was with the vigilantes as a double agent, and joins the mercenaries to help them escape the Daein soldiers. Later, while on the ship, Ike talks with him about his motivations, and deems him to be trustworthy despite Zihark having "personal reasons" he did not want to share (this being his past relationship with a laguz).

After the events of Path of Radiance, Zihark returns to Daein. In Daein, he joins the Daein Liberation Army along with Tauroneo and Jill to help free the country from its Begnion occupiers. He is first seen with Tauroneo and Jill defending Prince Pelleas' hideout against Begnion forces. Greatly outnumbered, they are nearly overrun when the Dawn Brigade arrives. With the help of the Dawn Brigade, they successfully fight off Begnion, and Zihark meets Micaiah and the rest of the group, reuniting with a number of familiar faces. The bolstered army then continues to fight for Daein's emancipation. After the liberation of Daein, he stays in the country to help with its reconstruction.

When Pelleas orders the Daein Army goes to fight against the Laguz Alliance, Zihark is at a loss. He does not want to betray his country and friends, but also does not wish to betray his ideals and fight against the laguz. He can recruit himself over to the the Greil Mercenaries by speaking with Lethe or Mordecai in Chapter 3-6: A Reason to Fight, or by having Lethe or Mordecai speak to him in Chapter 3-7: Rivals Collide and Chapter 3-E: From Pain, Awakening. Brom or Ilyana can also recruit him if they had an A support in Path of Radiance. Otherwise, he remains with the Daein army.

If Zihark rejoins the Greil Mercenaries, he assists them in fighting off Begnion. When Zihark encounters his former Daein allies in battle, he desperately tries to understand why Daein began its war to aid Begnion against the laguz. He questions how people he believed to be good could commit atrocities and fight to the end for what he believes an unjust cause.

If Zihark stays with Daein, he and the other high ranking soldiers learn the grave truth of the war, which was started due to the Blood Pact binding Pelleas to Begnion. Zihark now no longer has a choice to leave Daein, and fights on to ensure his country's survival. Even so, he refuses to fight against his close friends, even if they attack him first.

After the war, he travels Tellius as a mercenary resolving beorc-laguz disputes. It is said that he eventually settled in Gallia.

Zihark, in contrast to other characters in his archetype (the Navarre), is sociable, friendly, and kind. His interactions with others shows that he deeply values friendship, as seen by his knack for remembering names and faces, as well as his frequent invitations of his friends to meals. He is highly honorable in combat, asking for a peaceful solution prior to fighting as well as flat out refusing to ever fight his close friends. In his freetime, Zihark has a hobby of sword and equipment maintenance, a skill he picked up due to the frugal lifestyle of a mercenary.

Although Zihark is sociable, he is also quite secretive. In Path of Radiance, he only ever mentions his girlfriend in his A support with Muarim, leaving his motivation to defend the laguz a mystery to all his other friends and allies. In addition, he never told anyone that he hailed from Daein, surprising Sothe when the two of them met again in Radiant Dawn. His secretiveness likely came about from growing up and living in an environment where expressing his ideals and sympathies could have resulted in pain or death, given Daein's extreme prejudice towards laguz.

When it comes to his ideal of harmony between laguz and beorc, Zihark has strong convictions toward it, and is willing to sacrifice nearly anything to fight for it. Despite being one to avoid conflict when possible, he was willing to cut down every vigilante in the Toha Vigilantes to convince Lethe to trust him. After joining the Greil Mercenaries, Zihark found a likeminded individual in Ike, and expressed his happiness in that he felt he was finally able to do the good he always longed to do. This ideal is almost entirely driven by his past relationship with his ex-girlfriend, as he wished for nobody else to experience the prejudice and hate that he and his girlfriend experienced.

Despite Zihark's disapproval of his country's attitude towards the laguz, Zihark still feels attachment towards his country of birth. He returned to Daein after the Mad King's War because he hoped that he could change the country to become less prejudiced towards laguz. His plans were put on hold when Begnion tightened its grip over the defeated Daein, but his efforts to free his country strengthened his attachment with his country and with the people he fought together with. After its freedom, Daein became a pawn to Begnion and began its attack on the Laguz Alliance, forcing Zihark into a dilemma. Zihark knew in his heart that Micaiah and King Pelleas were good people, but continuing to fight with Daein would go against everything he stood for. Ultimately, what would allow Zihark to betray his country would be the words of his friends, reminding him of what he fought for back when he joined the Greil Mercenaries three years ago.

Zihark has shown to have a bit of a playful streak. This is seen on multiple occasions, such as when he ignores Ilyana's charms to take his food and when he later flirts with her, or when he cracks jokes with Tormod and Muarim after being reunited in Chapter 1-7 of Radiant Dawn. On the other hand, Zihark has a tendency to become flustered when confronted with the subject of marriage, seen when Brom tries to have Zihark marry his daughters and when Meg announces her intent to marry Zihark.

Zihark is a decent unit to have. He starts with higher stats and at a higher level than Mia, has the very effective Earth affinity, and has a Killing Edge. If trained, his Speed, Skill, and occasionally Strength will cap, making him a terror offensively. He can be a bit frail, though his fairly high HP growth helps balance that a bit. Myrmidons face some trouble in that they have no reliable ranged attack in a game where nearly every other class has cheap and effective ranged attack options. Also, the joining of Stefan will likely see both him and Mia be surpassed due to the former's extremely high base stats. However, Zihark can still see great use due to having many chapters to be deployed in, and through his ability to dodge and trigger his Adept skill.

*Zihark is only available in these chapters if he is recruited over to the Greil Mercenaries in 3-6 or 3-7.

**If Zihark is recruited over to the Greil Mercenaries in 3-6 or 3-7, he will not be available for these chapters.

Radiant Dawn lowers Zihark's physical stats, giving him the Strength and Defense growths on par with most Mages in the game. However, his decent bases, partnered with his Earth affinity, and generous Skill and Speed growths, will allow him to dodge most attacks directed at him, and retaliate with frequent Adept triggers. When his Skill and Speed stats reach their cap, he can then be given bonus experience to help cap his Strength and Defense stats due to how bonus experience levels give three guaranteed stat increases, though this will not take a small amount of levels. His contributions to the Dawn Brigade chapters can be very helpful, as most of the other members, sans Jill, Nolan, Volug, and Sothe, face issues such as low availability or low base stats but he won't be gaining much exp in Part 1. If he supports with Nolan or Volug, they both will receive up to +45 avoid thanks to their shared Earth affinities. On top of his natural avoid from having high Speed, Zihark will have little trouble avoiding all but the most accurate of attacks. Even though Zihark will eventually be surpassed by Edward due to his higher growths, Zihark requires less training to become useful, and has some flexibility in that he can switch to the Greil Mercenaries. In the endgame, Zihark will cap his Speed, Skill, and Resistance, and is decently likely to cap his Strength especially if he was given bonus experience level ups. He can be reliable in the Tower of Guidance due to being able to double attack practically all enemies, and can use the Vague Katti and Alondite very effectively.

"Crimea's an interesting place, but I've decided to travel to Daein. Perhaps fate will bring us together again."

Zihark traveled Tellius as a mercenary, resolving beorc-laguz disputes. Some say he eventually settled in Gallia.

Zihark and Micaiah in chapter 3-7

Ilyana vs Zihark (enemy) in chapter 3-7

Zihark and Micaiah in chapter 3-E

Zihark and Pelleas in chapter 3-E

Zihark vs Nailah in chapter 3-E

Zihark is illustrated in the trading card game Fire Emblem Cipher with the following cards: 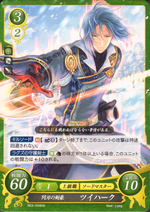 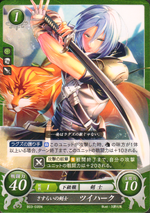 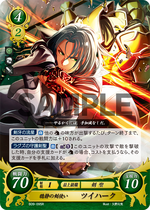 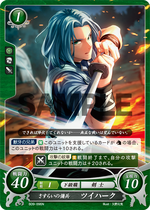 Zihark's shares his Japanese name, Tsuihaku (ツイハーク), with the famous Hong Kong filmmaker Tsui Hark. Several of his films have a wuxia theme, a fantasy genre commonly containing wandering vigilante characters, which Zihark himself embodies. Since the "Tsui" sounds similar to "zee", it is possible that his name was translated as Zihark as a result.

Zahhak' is a character in the Persian poem 'Shāhnāma' by Ferdowsi, written in approximately 1000 A.D.. The character has its sources in early Iranian mythology as 'Aži Dahāka.' In the poem, Zahhak is a handsome, good person who is easily swayed by evil counselors, particularly a character named 'Ahriman,' who first convinces Zahhak to kill his father to gain the throne. Gradually, through Ahriman's influence, Zahhak becomes more and more evil and corrupted. It is interesting, though, that Zihark from the games seems to follow the opposite progression, growing up in a prejudiced and cruel country whose influence he later successfully rejects.

As a note, 'Deros' in the below trivia is equivalent to 'Delos,' which is the Greek island where Leto gave birth to Apollo and Artemis.