Liam O'Brien
[view]
“This cretin is a Nohrian mage. He specializes in illusions and deception.”
—Gunter, explaining about Zola in Revelation Chapter 10

Zola is a non-playable character and a supporting antagonist in Fire Emblem Fates on all three routes. A mage of Nohr, Zola possesses the special ability to assume and alter the appearances of others.

Zola makes his first appearance in Chapter 9, where he imprisons Duke Izana of Izumo and thereafter disguises himself as the duke. Under the pretext of treating Corrin and Sakura to a rejuvenation treatment, Zola then lures them into a makeshift execution room, intending to end both of their lives. Before his plan comes to fruition, he is stopped by Hinoka, Kaze, and Azura after Hinoka believes that Izana's goofy demeanor contradicts his royal status. Cornered by the Hoshidans, Zola casts a smoke spell and attempts to flee in the midst of their confusion. Just as he escapes the throne room, Leo intercepts him and prepares to execute him for cowardice. In the nick of time, Corrin arrives on the scene and manages to convince Leo to spare Zola.

In Chapter 10, having nowhere to go, Zola decides to accompany Corrin, aware that he is no threat to them without an army under his command. Corrin allows him to stay, provided that he does not do anything to endanger the Hoshidan army. Suddenly, Kotaro appears, leading an army of Mokushujin ninjas to ambush Corrin and the Hoshidans, only to fail and is killed by them.

After the party holds off an invisible attack at sea in Chapter 11, Takumi is ambushed by an invisible soldier. Zola pushes him out of the way and bears the brunt of the attack, an act of honor that earns him the favor of the Hoshidans.

Later in Chapter 12, Zola employs his shapeshifting magic on Azura in order to disguise her as Layla, a dancer whom Garon particularly favors. Zola terminates his spell after Azura completes her performance for Garon, an act that reveals him to be a spy for Nohr. Despite proving himself to be completely untrustworthy, Zola unexpectedly pleads with Garon to spare Corrin. Zola pays dearly for this decision of his, as Garon regards it as an act of treason, executing him before the eyes of both the Hoshidans and Elise. In his dying breath, he asks Corrin to forgive him for his mistake.

Much like in Birthright, Zola again imprisons Izana and assumes his appearance in Chapter 18. When Ryoma talks with Corrin and Xander in private, Zola has Ryoma thrown into the dungeon, much to Xander's surprise. Zola drops his Izana disguise temporarily to tell Xander about his plan and leaves to execute the Hoshidan siblings. Xander, not wanting to win the war in such a dishonorable way (and also noting that it would violate Izumo's neutrality pact), decides to punish Zola's treachery and goes off to stop his plan with the rest of Corrin's army.

After his plan backfires, Zola begs for mercy, but his pleas fall on deaf ears as Leo executes him as a means of preventing him from speaking of the Nohrian siblings' involvement in preventing the capture of the Hoshidan siblings.

In Chapter 10, Zola again imprisons Izana and disguises himself as the duke. On this route, Zola completely fails to dupe Corrin thanks to Gunter's ability to see through his illusory veil. Zola proceeds to encase the entire village of Izumo in a thick glacier, forcing Corrin and their army to fend against the strategically hidden foes and eventually take him down. After Zola's defeat, he runs into the Izumo castle and takes Sakura hostage, attempting to use her as leverage for self-preservation. However, much like in the Birthright and Conquest routes, he is stopped by Leo, who proceeds to execute him for his cowardly behavior.

On the surface, Zola is a cowardly man, willing to deceive others and dutifully obeying the commands of those who wield great power over him. He is willing to do whatever it takes in order to attain the desires of those whom he has pledged his allegiance to, going so far as taking Sakura as a hostage in order to ensure his continued survival and dishonoring the neutrality pact of a peace-loving kingdom like Izumo. Without the watchful rule of a superior over him, Zola is pitifully weak, incapable of making calculated decisions for the sake of subsistence.

In Conquest and Revelation, Zola is executed by Leo, but in Birthright, he is spared death for a short amount of time, allowing more dimensions of his personality to be unveiled. On this route, Zola is portrayed as one who is capable of expressing his gratitude towards those who have provided him assistance in his time of need, even if they are his enemies. This fact is supported by his decision to plead for Corrin's life at the cost of his own.

Revelation Chapter 10 - Voice of a God

“Ah, I see you're ready to die. I'm going to enjoy this!”
—Zola's pre-battle quote in Chapter 9 of Birthright
“Urgh... What was I thinking...”
—Zola's defeat quote

“Ugh...Lord/Lady Corrin...please forgive me...”
—Death quote in Chapter 12 of Birthright

“Why are you fighting this?! I am not your enemy, those Hoshidans are! I act only for the glory of Nohr! Why is this happening? WHY?!”
—Zola's pre-battle quote in Chapter 18 of Conquest
“I must...r-report back... to King...Gar...on...”
—Zola's defeat quote

“Mwe-hehehehe! You can't possibly defeat me!”
—Zola's pre-battle quote in Chapter 10 of Revelation
“Gah! I can't believe it! Was your weakness an illusion?”
—Zola's defeat quote

Zola is illustrated in the trading card game Fire Emblem Cipher with the following cards: 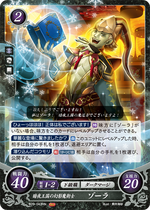 Artwork of Zola in Fire Emblem 0 (Cipher) by Misa Tsutsui.

Zola as a Dark Mage in Fire Emblem 0 (Cipher). 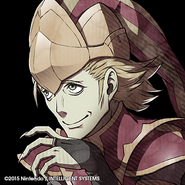 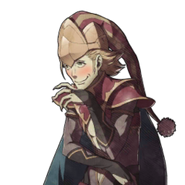