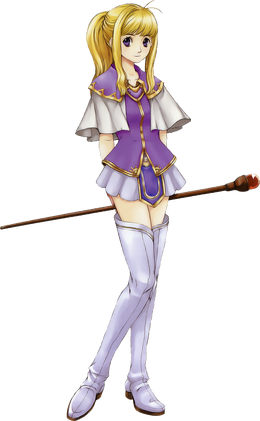 “A true lady must be dressed properly when they fight.”
—Clarine in a support conversation with Dorothy

Clarine is captured by Erik, who pretends to help her in reuniting with her brother, but actually intends to gift her to 拿榭恩. However, she is released by Rutger and thereafter joins 羅伊's army. During Chapter 4, she can persuade Rutger to fight for Roy's cause by informing him about its opposition to Bern. Later, in Chapter 11A or Chapter 10B, she can convince Klein to switch sides by informing him that Roy's group are not bandits like the Etrurian army falsely told him.

After the war ends, Clarine returns to her home in Aquleia and lives like she did prior to the game's events. Although her personality never changes, her charm and true kindness earns her love and admiration from her peers in the Etrurian nobility.

Clarine is an arrogant and very pampered girl who often looks down at others because of her status. However, this comes more from inexperience and childishness, rather than outright malice. She is close to her older brother, Klein, whom she looks up to and considers very attractive.

Despite her childish and self-centered attitude, she does have a genuinely soft side, which is apparent in her supports with Rutger (crying and showing worry after he avoids her) or Dorothy (helping her with her self-esteem troubles).

In Chapter 4, she appears as a Non-Playable Character from Turn 4. She will move toward 羅伊 and speak to him, wherein she is immediately recruited. She cannot be recruited during the Player phase.

Unlike Saul or Elen, Clarine is mounted and is more evasive than any other potential healer, with Lugh or 莉莉娜 likely to be the next closest contender after they promote. She is arguably the most evasive character in the game, capping Speed rather early.

Clarine often will cap Speed and Luck, making her a useful wall, since her avoid will be so high. In addition, she generally gets good skill and resistance rankings to boot. Although her HP and Defense ratings are rather low, this is compensated with her good avoid and the ability to buy Angelic Robes with a Silver Card at a Secret Shop in Chapter 16. Anima tomes are also much lighter in this game. Clarine's poor Magic base and growth render her ill-equipped to quickly defeat enemy mages, however.

Despite her magic growth not being great, her offense is still passable. Most enemies do not have much resistance, so she can deal decent damage to them. Her high speed also lets her double most enemies. Clarine's triangle support with Rutger and Dieck improves her already impressive avoid as well as giving her a good critical bonus. Combined with the 雷電 tome, her critical rate can go well above 20. Unfortunately, this support triangle is very difficult to build, owing to the differences in movement between Clarine and the others, as well as the relatively slow Support growth for Clarine/Dieck and Rutger/Dieck.

Refined Noble
Noble daughter of Count Reglay of Etruria. Fond of her brother, Klein. Has lived a privileged life登場作品：Fire Emblem: The Binding Blade.

Clarine returned home to Aquleia and lived her life as she did before the war. Her personality never changed, but her charm and true kindness earned her admiration and love from her peers in the Etrurian nobility.

Clarine's appearance in Hasha no Tsurugi. 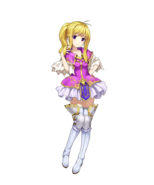 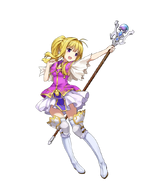 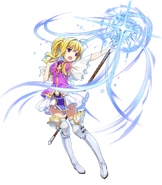 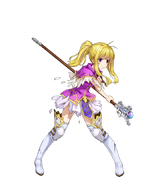 Clarine as a Troubadour in Fire Emblem 0 (Cipher).

Clarine as a Valkyrie in Fire Emblem 0 (Cipher).

Clarine as a Troubadour in the One Hundred Songs of Heroes Karuta set.

Clarine's portrait in The Binding Blade.

Clarine's battle sprite in The Binding Blade as a Valkyrie.

Clarine as a Troubadour
在此图库中添加照片