Chapter 11A: The Hero of the Western Isles or
Chapter 10B: Caught in the Middle

“I was sent here to protect the villagers. To fulfill my mission, I will hereby join the Lycia Alliance Army.”
—Klein when recruited by 克拉莉涅.

Klein is the leader of a mercenary group from Etruria. He hired Thea and her squad of pegasus knights. His troop is stationed in the Western Isles when 羅伊's army arrives there. Klein receives orders to enter a battle against Roy to protect the villagers. However, he is persuaded to switch sides by either Roy or Clarine, and then convinces Thea to do the same. He is very fond of his younger sister, but still considers her to be young and inexperienced, and does not hesitate to scold her when he thinks that it is needed.

After the war, Klein becomes an ambassador of Etruria.

銀色貴公子
A young general of Etruria. Clarine's brother. Treats all as equals登場作品：Fire Emblem: The Binding Blade.

Klein is a typical pre-promoted unit with lower base stats than if a non pre-promote was trained. However, in Hard Mode, his stats will start out higher, giving him a little more consistency. A Hard Mode Klein will have higher Luck and Resistance than Wolt, but lower HP and Skill. In Normal Mode, Klein's stats will be lower than Igrene's, the other pre-promote sniper, except in luck; however, Klein has some good supports that grow at a quicker pace than Igrene's (in Hard Mode, their stats will be the same, except Klein having much higher luck). Klein has fairly high growths for a pre-promote, and combined with his stat boost in Hard Mode and high weapon rank he will be competent throughout the entire game. He may be a more favorable bow user than Wolt and Dorothy since his bases are less problematic to deal with, and he is slightly better than Igrene thanks to his higher growths and earlier join time. He is very good at slaying flying units since he tends to kill them in one hit with a Silver Bow. Klein has many supports that can fix his low defense, as well as a few that can increase his avoid.

Klein is German and Dutch for small.

Artwork of Klein by Rika Suzuki. 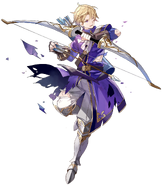 Klein as a Sniper in Fire Emblem 0 (Cipher).

Klein's portrait in The Binding Blade.

Klein operating a Ballista in The Binding Blade.

Klein as an enemy in The Binding Blade. 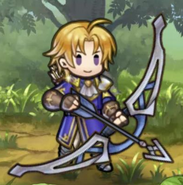