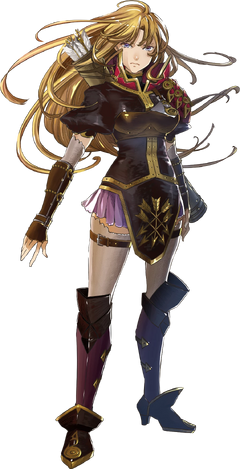 Artwork of Clarisse from 《聖火降魔錄英雄雲集》.

Prologue (Fought in Chapter 3x: Shadows Behind the Scenes and 13x: Within the White Darkness)

“You want to escape from the darkness? I won't let you. I'll make sure you never again see the light of day!”
—克萊涅 in Chapter 13x

She is playable along with her fellow assassins in the second downloadable episode.

While not much of Clarisse's past is known, it was hinted that she was born from a noble family, and her family had been murdered by the Soothsires, who had looted their house. She had been the sole survivor, and seemed to have lost her memories from the incident, where she had been found by Eremiya, though it is also hinted that Eremiya and Gharnef had a hand in her family's death.

Under Eremiya's care, Clarisse was trained to be an assassin, and grew up alongside Reese, Legion, and many other children, all molded to become Eremiya's puppets that would obey Eremiya until they broke. Clarisse soon came to view that only the strong would survive and the weak were meant to perish.

During a mission after the War of Shadows had ended, Clarisse, Reese, and Legion were assigned to eliminate the Soothsire remnants, which by extension saved many children that had been taken by them. While Reese was determined to save the children, Clarisse showed no care and simply wanted the mission done, though she wanted to take the lead in the mission. 雅典娜 joined their group to help save the children soon, and though Clarisse felt like killing her, she decided to let Athena do what she wants so long as Athena would not get in her way.

After annihilating the Soothsires, Clarisse and Reese entered the hideout to find the prisoners, and stumbled upon some expensive paintings, one of the paintings being of her family and her. Though she didn't recognize it completely, it made her recall some of the lost memories of her family. She also knew the family in the painting were dead now and felt somewhat sad at knowing that, despite how she claimed that it was only natural for the weak to perish. After Reese had rescued the captives, Clarisse warned Reese not to tell anyone about what she had said.

Before the War of Heroes, when Reese went on a covert mission to infiltrate Altea castle for the plan to assassinate Marth, Legion had set up an attack on a village to help Reese earn Marth's trust. Clarisse went to see Legion on his progress after Reese and her platoon had stopped the bandit attack, having finished one of her assignments. The two then discussed their plans on killing Marth.

After Marth's assassination ended in failure and later on the War of Heroes began, Clarisse was tasked on hunting down and killing anyone that had assisted Marth in the previous war. This is due to them being aware that Marth's former allies would come to help Marth later on, which would make things difficult for them. While she had cornered one of Marth's former allies, Wrys, and planned on making him die a slow and painful death, she was interrupted by the Altean army arriving. Clarisse saw this coming, though, as Reese had warned her beforehand that the Altean army would never abandon a comrade.

While Reese showed concern on whether Clarisse could take on the task, Clarisse was not worried. She believed the Altean army to be weak, and thus was confident her underlings could get the job done. Reese warned her that underestimating them would lead to Clarisse getting herself killed, as the time Reese spent undercover in Altea had let her learn that despite the ill advise in tactics she had given, her former comrades led by the Avatar were very strong.

Clarisse only takes offense in that, thinking Reese had grown attached to her former friends. She then told Reese to sit back and watch as she kills them all, but also warned Reese not to get in her war, which made Reese leave. Clarisse soon leaves as well, but warns her underlings that if they fail to kill the 'rats', she will make sure they are dead instead.

After her underlings were killed and Wrys was saved, Clarisse admitted that the Altean army was better than she gave them credit for. However, she showed little concern, as they would be eliminated later, and would simply spare them for now. Reese reminded Clarrise that she had been warned, only for Clarisse to grow annoyed and question Reese's loyalties, to which Reese rejected, as Reese knew that she had to defeat Avatar for Eremiya's sake.

Clarisse later resurfaced when Legion's clone worked with Caesar and Radd, two mercenaries and former allies to Marth in the previous war, to try and ambush Marth. Clarisse questioned whether Radd and Caesar would be useful, and also expressed disappointment at the idea that Legion would likely get the best part in killing Marth, before leaving. After that mission ended in failure with Legion's clone's death and Caesar and Radd joining Marth as well, Clarisse commented on their failure and the clone's death, though Legion corrected her in saying that it wasn't a clone, but his brother, and they were all Legion. Clarisse shrugged it off and questioned if the Legion she was talking to was the real Legion or not, though even Legion didn't know, but declared that next time, all the Legions would fight to kill Marth.

Unfortunately, that would ultimately lead to the original Legion's death, as he was killed when trying to kill Horace when Marth had intervened. When Reese tried to dissuade Eremiya from continuing their pursuit of the Altean army, it was met with failure as it was an order from Gharnef. Clarisse then stepped in and offered to eliminate the army instead of Reese. Eremiya allowed this, before she ordered Reese to get rid of the remaining Legion clones, who were now useless and unable to fight due to the original Legion dying. When Reese showed hesitance to kill the remaining Legion clones, Clarisse offered to dispose of them in Reese's place, calling Reese useless. This earned Clarisse praise from Eremiya for being a good girl, while Reese was mocked as a failure.

Clarisse attempted to ambush Marth's army during a blizzard in the mountains, but her sneak attack ended in failure due to Athena finding them and warning Marth. Despite that, Clarisse was still confident in her victory due to the snow masking their presence, while they still have the ability to see Marth's group. However, Marth's group was far more powerful than she realized and she was defeated in battle while the rest of her forces were routed.

As she laid there in defeat and on the verge of death, Clarisse lamented on how she was all alone, calling out to Eremiya weakly. Much to her surprise, she was found by Reese. Unable to understand, Clarisse assumed that Reese simply came there to laugh at her. Instead, Reese quickly grabbed her and tried to take her back to the hideout, much to Clarisse's confusion. She questioned Reese on why she would do this despite how much Clarisse had mistreated her. Reese simply said that it was because she's Clarisse's big sister, to which Clarisse retorted that they weren't truly siblings, just orphans that had always been alone.

Reese responded that they were still raised together by Eremiya regardless, and Reese cherished the bond she made with Clarisse, and losing it would mean that she would be all alone again, asserting the same would apply to Clarisse. Touched by Reese's words, Clarisse accepts almost begrudgingly to hold onto Reese, and states that it was the first and last time she would obey Reese.

Sadly, despite returning to the hideout and Reese pleading with Eremiya to help save Clarisse, Eremiya merely ordered Reese to abandon her, as Clarisse was now useless. Clarisse understood that this would be the case, knowing the consequences of failure, but felt deeply hurt at being abandoned by the woman that raised her. Clarisse told Reese to leave her, as she didn't want Reese to see Clarisse like she was now. However, when Reese began to leave, Clarisse quickly changed her mind and pleaded for Reese to stay, not wanting to be alone.

Returning to her side, Reese stayed with her, assuring her that she would always be with her, reminding her once more that she's Clarisse's big sister. Clarisse said that Reese was annoying to the end, but as she slowly died, she finally called Reese sister as well.

It is very likely that Clarisse's death was the reason that Reese found the courage to eventually join Marth's army by the Avatar's persuasion, while also resuming the name Katarina, as Clarisse had been the one person with the assassins that Reese held a true bond with.

Clarisse is depicted to be a cruel, sadistic woman that believed that the strong would live, and the weak would suffer. This was likely due to her cruel upbringing by Eremiya. Her sadistic nature is shown when she had Wrys cornered and wanted to give him a slow and painful death, and even expressed annoyance when she wouldn't get to have the chance to kill Marth herself. She would also always mistreat the other orphans that she grew up with, always insulting them or bossing them around, particularly Reese, even though Reese tried to be a big sister to her.

She is also shown to be rather remorseless, as she had no problems with declaring to Reese that she would kill all of Reese's former companions that Reese had betrayed. Clarisse even willingly offered to dispose of the Legion clones after the original died, despite how they had grown up alongside Clarisse.

Despite Eremiya's cruelty, Clarisse has a deep loyalty towards her foster parent, attempting any means to impress her. This ranges from wanting to take any lead in missions that she was part of (even ones that annoyed her), offering to kill any enemies, or disposing any comrades that were useless. This was all so that Eremiya would praise her. This could all possibly stem from her faint memories in her past when she was patted on the head by her parents, a gesture of praise that she yearns for. When she saw the painting of her family, and despite not fully remembering her family, knowing that the family in that painting was dead made her upset, despite telling herself that the weak would always naturally suffer.

When she is defeated in battle and found by Reese, she revealed to have a deep fear of being alone, possibly due to how she was alone as an orphan. She was deeply touched by Reese showing such affection as an older sister to Clarisse, and later on deeply hurt when learning that Eremiya deemed Clarisse useless and ordered Reese to abandon her, even though Clarisse was well aware of the consequences as she carried those same orders as well before. She even threw away her pride and pleaded that Reese remained by her side as she neared death.

As she died, she called Reese sister, showing that Clarisse did in fact cherish her bond with Reese.

Sniper in the Dark
One of a group of assassins plotting to kill Marth. Katarina's friend. Cruel and lacks manners, but yearns for a family登場作品：Fire Emblem: New Mystery of the Emblem.

“A big, warm room... Soft carpet... A family portrait... The two of them smiled... And gently... patted my head...”
—Clarisse remembering some of her past in Assassins.

Artwork of Clarisse from 《聖火降魔錄英雄雲集》. 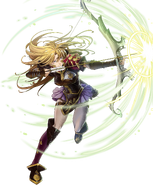 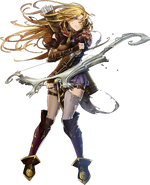 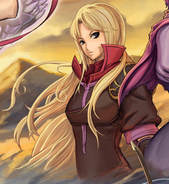 Clarisse, as seen from a larger wallpaper from New Mystery of the Emblem.

Clarisse, in an illustration from New Mystery of the Emblem.

Clarisse's portrait from New Mystery of the Emblem.

Clarisse's injured portrait from New Mystery of the Emblem.
在此图库中添加照片