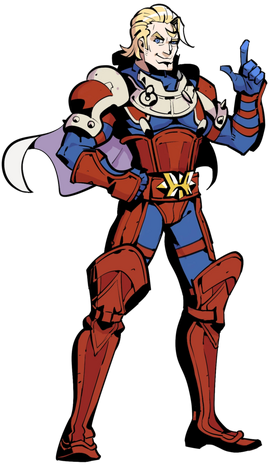 Arthur as he appears in 《聖火降魔錄英雄雲集》.

Birthright Chapter 23: Camilla (Chapter) (Appears as an enemy but can be talked to become an "other unit").
Revelation Chapter 14: Orders

“I am who I've always been: Destroyer of Evil, Champion of the Weak! I am Arthur! The Hero of Justice!”
—Arthur during his C-Support with 艾麗澤

哈洛德（Arthur、ハロルド） 是以下遊戲中可使用的角色：聖火降魔錄if and an ally on the Conquest and Revelation routes.

Arthur is one of 艾麗澤's retainers and a self-styled "Hero of Justice". Arthur's support with 阿庫婭 reveals that he grew up as a commoner in Nohr to parents who taught him that justice was acting on what his heart told him to do. More than 10 years before the events of the game he met Azura as a child when she ran away after being mistreated in the castle, and subsequently stood up for her and got punished when the guards came to take her back. Since that time, he studied martial arts and decided he wanted to protect people on the streets from injustice.

When Elise goes missing in Chapter 23, Arthur and 艾爾菲 head to the underground area of Nohr where they find Elise with the Avatar. Fearing that they are holding her hostage, Arthur and Effie join 卡美拉's forces to rescue her. Eventually, Arthur is able to meet with Elise where he learns that the Avatar is out to stop King Garon's madness and that she is supporting them. Following his liege, Arthur temporarily joins the Avatar's army to protect Elise.

When the Avatar is sent by King Garon to quell the impending rebellion from the Ice Tribe, Elise decides to disobey her father's orders for the Avatar to go alone. Elise brings along Arthur and Effie to help them out, though they arrive slightly later since he lost his map through the Woods of the Forlorn.

When Elise sees King Garon's increasingly apparent insanity, she decides to join the Avatar to join their cause to save both kingdoms. Arthur follows her and joins the Avatar's army at Port Dia.

In Paralogue 19, Arthur decides to take a visit to son Percy's Deeprealm. Upon arriving, Percy labels Arthur as a criminal and hired a group of mercenaries to take him out. The mercenaries believe that Arthur is actually Gazak due to his chin looking similar to his, and after Percy calls him Gazak, the mercenaries attack, resulting in a humorous downward spiral.

Unfortunately, Arthur's good intentions are often hindered or even ruined by his notorious bad luck. Often occurring in unexpected instances, Arthur's bad luck is known to be comically extreme to the point of being detrimental to his overall well-being. His supports with 菲利西亞 prove this fact, where a banana peel and a swarm of mosquitoes materialize out of nothingness when he attempts to teach her how not to spill water when carrying it. Occasionally, this bad luck gives good luck to others, as shown in both Mozu and 陽炎's supports.

Despite being aware of his bad luck and having developed a disdain for it, Arthur is not known to be resentful and vindictive, choosing instead to maintain a stance of optimism in all that he does. His supports with 剎那 evidence this fact, where he, despite failing to pick up supplies for a party on more than one occasion, persists in maintaining an attitude of positivity to achieve eventual success in his task.

Arthur is said to be the most flashy when falling down out of everyone in the army. His birthday is January 24.

Arthur is the first Fighter recruited in both Conquest and Revelation. Arthur has excellent health, strength and skill growths. While his strength growth is lower then Charlotte, it is still decent enough to make Arthur a useful unit. Arthur's speed and defense growths are moderately high, while his resistance and luck growths are very poor. However, coming from Arthur's relatively low base speed, it may be difficult to get his speed high enough for him to double attack. True to his character, Arthur has the worst luck out of every unit in-game. It will result in Arthur having a relatively low hit, avoid and critical hit rate, and also allows enemies to land critical hits on him more often. This is further dampened by his own Personal Skill, Misfortunate. While it drops enemies Critical evade by 15, he also experiences a 5 point drop in his own Critical evade. Arthur is a good candidate for using Goddess Icons as his Luck is extremely hurtful if facing high Critical chance units, thus the large boost from one can reduce the sting of this stat flaw.

Arthur's two promotion classes are the Hero and Berserker. While Arthur loses some strength in the Hero class , he gains much more skill and defense, making him a good candidate for attacking skills and for basic combat fights. He learns 太陽 at Level 5 to recover some health when he attacks, which is his only means of healing himself outside of Buddy and Partner classes. He also learns Axebreaker at Level 15, reducing the impact of Axe wielders, especially Berserkers who have high critical hit rates. The Hero class keeps a balanced build for Arthur, making him reliable for drawn out battles.

Berserker is much more focused on dealing powerful raw damage, especially when it has an innate 20% critical activation bonus, which can help to relieve his low Luck's decreased chance. Arthur does gain more HP and Strength, but he loses some Defense and reduces his Luck to the point that it will almost never increase, though only just slightly below his Luck growth before. Arthur learns Rally Strength which can help to bolster his allies physical prowess. Complimented by his Personal Skill, enemies can take the critical evade penalty in his zone and be dealt with by an ally within range before attacking. He also learns Axefaire further bolstering his own Axe proficiency. While Arthur has more raw damage, he is not quite as suited for longer battles and is best used for quickly eliminating enemies without getting hit himself.

Arthur's secondary class is the Cavalier line. As an alternative class to the Fighter class, Arthur's speed will be shakier under the Cavalier class due to the reduced growth rate; however, he gets increased growth rates in luck, defense, and resistance, all of which Arthur can use to address his durability issues. From this class, Arthur can learn Shelter and Elbow Room, although neither will work efficiently later on. Its promotions are the Paladin and Great Knight classes. As a Paladin, Arthur will be fairly well-rounded except in Luck, which will likely still be very low, and resistance, though the Paladin has a very strong resistance base. From the Paladin class, Arthur can learn Defender to boost up his stats when he is paired up with an ally unit, although this will lose effectiveness later on. He can also learn Aegis to protect himself better, especially from magic users given his good skill growths. As a Great Knight, Arthur will lose quite a bit of speed, and will not have the same Luck growth rate as a Paladin, but can capitalize on his physical defenses and already start out with a D rank in Axes to work with. From the Great Knight class, Arthur can learn an offensive skill, 月光 and Armored Blow to take less damage against physical attackers when he initiates a battle.

It could also come from the legend of the hero Artur who pulled the sword Excalibur from its stone, as his son Percy is named after the hero Perseus in Greek Mythology.

Artwork of Arthur from the 4koma book. 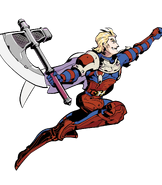 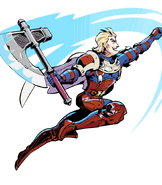 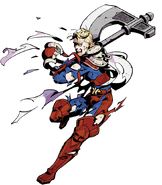 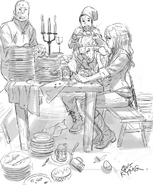 Artwork of Arthur and Effie from Yusuke Kozaki's Twitter.

Artwork of Arthur as a Cavalier by Nekobayashi in Fire Emblem 0 (Cipher).

Artowrk of Arthur as a Paladin by Nekobayashi in Fire Emblem 0 (Cipher).

Arthur, as he appears in Fire Emblem 0 (Cipher).

Arthur, as he appears in Fire Emblem 0 (Cipher) as a Hero.

Arthur as a Cavalier in Fire Emblem 0 (Cipher).

Arthur as a Paladin in Fire Emblem 0 (Cipher). 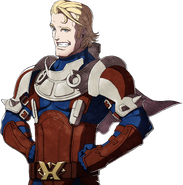 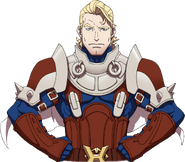 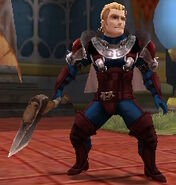