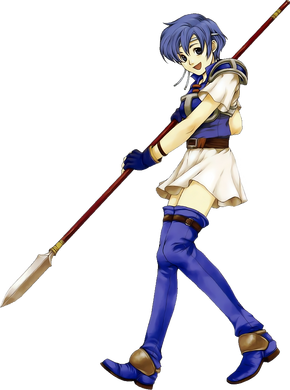 第2章: The Princess of Bern

“Yeah. I'm on a pegasus, see? I have a different movement pace than the others, so it's easier to fight on my own...”
—Shanna talking to Dieck in a support conversation.

夏妮（Shanna、シャニー）是以下遊戲可使用角色： 聖火降魔錄 封印之劍. She is a Pegasus Knight from Ilia and the younger sister of Juno and Thea. While her sisters are full-fledged Pegasus Knights, she is still in training. She joined Dieck's mercenary crew as part of her training. She used to address Dieck as "Chief", but he did not like that. She thinks that Lot has a crush on her, although he only cares about her as a little sister. Because of this, she calls him "Big Brother". She is also kinder to Lot than she is to Wade because she fights with the latter in their supports conversations.

She makes a brief cameo appearance in chapters 16 and 17 of the Hasha no Tsurugi manga.

Shanna is the player's first flying unit and thus is very useful for rescuing others and carrying them around the map. She has very high Skill, Speed, and Luck, but her HP, Defense, and Strength are quite lacking. While her constitution is quite low, which will often compromise her doubling and dodging capabilities, she rarely comes across a scenario where she is ever in danger of being doubled outright - even in Hard Mode - simply because of her incredible Speed base and growth. Although her strength is on the low end of the spectrum, her offense is patched up easily by lances, which have generally good might, and unlike the weaker swords won't suffer might loss from weapon triangle disadvantage against the abundant enemy lance users.

Thea is subjectively a better combat unit in Hard Mode due to her stat boosts and more balanced growths, but Shanna has the advantages of being recruited earlier and at a lower starting level, and having better Avoid, and is only behind her in base stats by two or so stats on normal despite being seven levels lower, which she'll quickly reach and surpass. It is not a bad idea to use both, since having two fliers is useful for rescue chains and they can both support each other. Shanna supporting with 羅伊 is also feasible if she is near him often. This support could give both parties a much needed boost in attack and critical, with Shanna's rescue utility aiding Roy in approaching the throne despite their differing movement when separated. Supporting with Dieck gives her a nice boost in Defense and critical. Wade can give Shanna the same bonuses of the Roy pairing, so if he's in use this is a good pairing to boost both sides' effectiveness.

Sprightly Flier
A trainee of the Pegasus Knights of Ilia. Cheerful and optimistic登場作品：Fire Emblem: The Binding Blade.

After the war, Shanna was knighted and became a full-fledged Pegasus Knight. Throughout her career, she served as lieutenant and squad leader, and she eventually rose to the position of Flightleader of Ilia. Her cheerful personality earned her much admiration and respect from her colleagues.

Shanna gave up the path of the Pegasus Knight and went to Pherae with Roy, where they married. Rebuilding the battered land was a painful process, but her cheerful personality encouraged many people to rise up and help lead Lycia to prosperity again.

Shanna is illustrated in the trading card game Fire Emblem Cipher with the following cards:

Shani is Hebrew for "red". [1]. Shanna (often written 'Shana' or 'Shayna') is a Hebrew or Yiddish name meaning "beautiful". 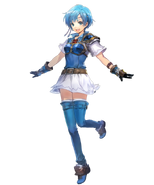 Shanna as she appears in 《聖火降魔錄英雄雲集》. 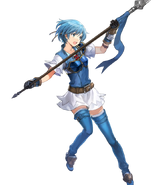 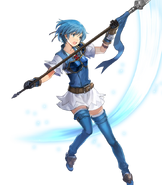 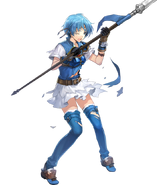 Artwork of the Ilian Pegasus sisters from Fire Emblem 0 (Cipher).

Artwork of the Ilian Pegasus sisters from Fire Emblem 0 (Cipher).

Shanna as a Pegasus Knight in Fire Emblem 0 (Cipher).

Shanna's appearance in Hasha no Tsurugi.

Shanna's portrait in The Binding Blade. 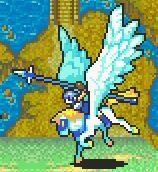 Shanna as a Pegasus Knight in The Binding Blade. 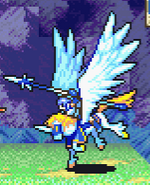