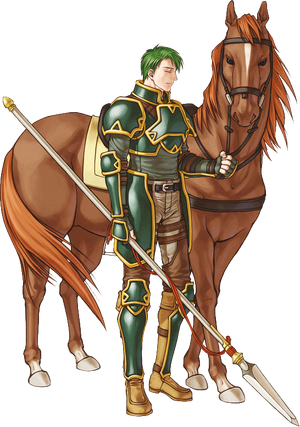 Artwork of Oscar from Path of Radiance. 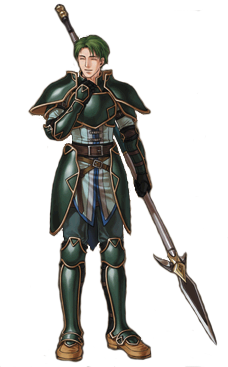 “I love Crimea, but I'm happy here. I want to serve Ike as a member of the Greil Mercenaries.”
—Oscar talking to Kieran in a support conversation

奧斯卡（Oscar、オスカー ）是以下遊戲可使用角色： 聖火降魔錄 蒼炎之軌跡 and 聖火降魔錄 曉之女神. He is a former member of the Crimean Royal Knights 12th Regiment with Kieran, and is the older brother of Boyd and Rolf. In a support conversation he shares with Janaff in Path of Radiance, Oscar is revealed to be about 24 years old or so.

When Greil later passes on, Oscar steps in to back 艾克 up as the new leader of the company, providing him with the solace and support he needs in order to live up to his father's name.

In Chapter 3-1, Oscar will be able to meet Rolf's biological mother when he visits a particular house in this chapter. Upon recognizing her, he will leave abruptly, ignoring her pleas for him to return.

Rolf's mother will then trespass into the encampment of the Laguz Alliance in the preceding chapter, and is saved from being captured by Oscar and Boyd. Boyd promptly gets into a heated confrontation with her, revealing the fact that she had abandoned her entire family in order to elope with an external lover. Being the compassionate individual that he is, Oscar will then attempt to get Rolf to meet her. Rolf will refuse to do so almost immediately, asserting that the only true family that he has is that of the Greil Mercenaries. Touched by the strong words of his brother, Oscar will then get her to leave the encampment.

Oscar is also renowned for being a good cook, and enjoys receiving feedback on his culinary skills. This may be observed in a support conversation he shares with 艾克, where he readily agrees to prepare meals to satiate Ike's hunger.

Oscar has good base stats for his starting level, and like most other Abel-type characters, excels in Speed and Skill growths.

Alongside his decent Defense, Oscar is thus a viable choice to be placed on the front lines without the constant need to have his HP recovered. While his Strength is not as high as his Skill or Speed, it is usually sufficient enough for him to remain as a useful unit throughout the entire duration of the game.

When Oscar promotes into a Paladin, it is recommended to select 弓s as his second weapon of choice, but only if the player is willing to utilize the Triangle Attack alongside Boyd and Rolf. However, given that setting up the Triangle Attack tends to be more trouble than it is worth. If Boyd and Rolf weren't used and/or aren't doing so well then 斧s work for him due to Steel Axes being E Rank thus enabling him to use stronger weapons after promo.

Oscar is the easiest potential Silver Knight to train, as he can be Promoted as early as Chapters 3-8 and 3-9. However, Oscar has some key flaws that hold him back from his true potential. Lances tend to be geared towards fighting Sword Generals and Swordmasters, neither of which Oscar can effectively defeat in one round, either due to not having enough strength or speed. Meanwhile, 狄亞馬特 joins at the same time as Oscar, can promote earlier, and can deal with Horseback and Wyverns better than Oscar can. Thus, Oscar tends to fall in the shadows of Titania.

However, Oscar still has some merits. As a Silver Knight, Oscar's speed can give him better luck against armored units, and can inflict more damage upon them, especially with the threat of his new 太陽 skill. In addition, he can also attack the opponent while still staying off the frontlines if need be. His stats are still okay, meaning that he can still be used to a degree of success when trained correctly. Overall, while Oscar is not the most consistent unit, he is still a usable asset to one's team.

Agile Horseman
A straightfoward but accommodating member of the Greil Mercenaries. Has good instincts登場作品：聖火降魔錄 蒼炎之軌跡.

A Support with Ike[] 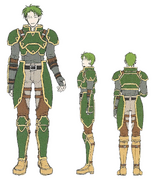 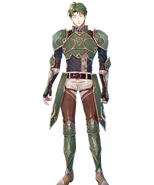 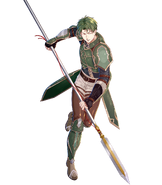 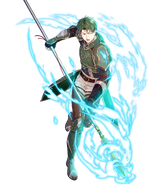 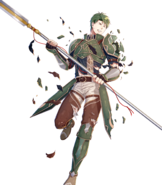 Illustration of Oscar, Boyd and Rolf by Mayo in Fire Emblem 0 (Cipher).

Oscar as a Lance Knight in Fire Emblem 0 (Cipher).

Oscar in Fire Emblem 0 (Cipher) as a Paladin.

Oscar's portrait in Path of Radiance. 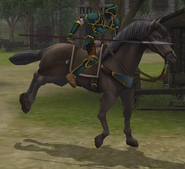 Oscar's battle model as a Lance Knight in Path of Radiance. 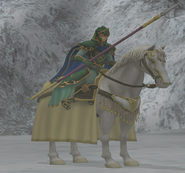 Oscar's battle model as a Paladin in Path of Radiance. 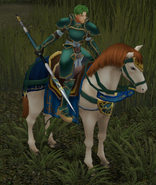 Oscar's battle model as a Lance Paladin in Radiant Dawn.

Oscar's battle model as a Silver Knight in Radiant Dawn. 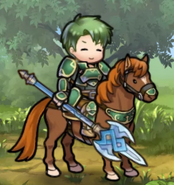