“For the first time in my life I know what I'm here for. And that's to fight... I'm not scared anymore, 赛列斯.”
—Julia in the Final Chapter of Genealogy of the Holy War.

Julia (ユリア, Yuria in the Japanese version) 是以下游戏可使用角色： 圣火降魔录 圣战之系谱. She is the daughter of 阿尔维斯 and 迪雅朵拉, the younger twin sister of Julius, and the younger half-sister of both 赛列斯 and Saias. She is the descendant of Heim on her mother's side, Fjalar on her father's side, and Saint Maera on both sides. Cigyun, Kurth, and Victor are her grandparents.

Sometime before the second generation begins, Julius obtains the Loptyr tome from Manfroy and is thus possessed, causing him to kill Deirdre. Before her death, however, Deirdre managed to warp Julia out of the castle to safety. As a result of the trauma she suffers from the incident, Julia ends up losing her memories. Julia is then found by Lewyn, who cares for her until Seliph chances upon them after retaking Ganeishire, whereupon Julia will join the liberation army. Seliph will then give her either the Nosferatu or Aura tome, who picks it up at the castle he conquers after her enlistment.

As a result of her strong growths in Magic, Julia will always make an extremely competent healer, so ensure Lana/Muirne speaks to her in Chapter 6, after Ganeishire Castle is subjugated (This will result in her attaining a 大圣疗 Staff).

When Julia is re-recruited in the final chapter, she will obtain the Book of Naga upon visiting Velthomer. At this stage in the game, she becomes extremely formidable, as this tome increases both her speed and skill by 20 points, her defense and resistance by 20 points, and has the ability to nullify the effects of the Loptyr tome. Naga's usability still hinges moderately on the stats Julia possesses by that point in the game, though this should only be a cause for worry when facing off against the Dark Warlords.

In Chapter 6, Lana/Muirne may speak to Julia, and she will gain a 大圣疗 Staff.

In Chapter 6, if 赛列斯 captures Isaach Castle before seizing Sophara Castle, Julia may speak to him, and she will gain a tome of Nosferatu. Aura cannot be attained when this happens.

In Chapter 6, if 赛列斯 captures Sophara Castle before seizing Isaach Castle, Julia may speak to 赛列斯, and she will gain a tome of Aura. Nosferatu cannot be attained when this happens.

In Chapter 8, if Ishtar has not made her appearance yet, Julia may speak to 赛列斯, and he will gain one point of luck.

Julia is a unique character, in the sense that she possesses absolutely no love points or growths with anyone apart from Seliph, with whom she has a negative love growth, and their starting love points can be either 0 or 490, depending on certain obscure conditions. However, through exploitation of a bug caused by the Jealousy System with Lana/Muirne and Larcei/Creidne, it is possible to cause the duo to fall in love. Furthermore, she still gains love points with units she is placed next to normally, so she can still end up with another lover if kept by their side for 100 turns. (Theoretically, there is enough time for any unit except possibly Coirpre/Sharlow to fall in love with her by the end of the game, but realistically only units that are recruited in Chapter 6 stand a good chance; as the only male unit recruited in Chapter 6 who shares her pre-promotion movement rate Arthur is the best choice.)

Naga's Blood
Inheritor of the Book of Naga. Seliph's half sister by a different father. Gentle, yet faces her destiny with strength登场作品：Fire Emblem: Genealogy of the Holy War.

“Please stop! Where am I being taken?!”
—Julia's defeat quote in Genealogy of the Holy War

Official artwork of Julia from the Super Tactics Book.

Artwork of Julia from the TCG.

Julia as she appears in 《圣火降魔录英雄云集》. 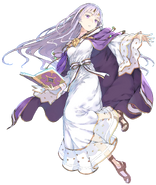 Artwork of Julia from 《圣火降魔录英雄云集》 by Haimura Kiyotaka. 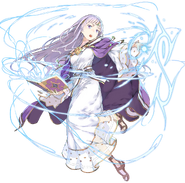 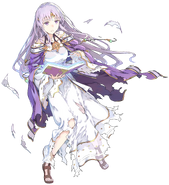 Artwork of Julius, Julia and Seliph by Rika Suzuki.

Julia as she appears in the Nea Fuyuki manga adaptation.

Julia, as she appears in the first series of the TCG as a Level 1 Light Priestess.

Julia, as she appears in the first series of the TCG as a Level 10 Light Priestess.

Julia, as she appears in the Anthology series of the TCG as a Level 15 Light Priestess.

Julia, as she appears in the Promotional series of the TCG as a Level 20 Sage.

Julia, as she appears in the third series of the TCG as a Level 20 Sage once more.

Julia's portrait in Genealogy of the Holy War.

Julia's alternate portrait in Genealogy of the Holy War

Possessed Julia's portrait in Genealogy of the Holy War

Julia as a Light Priestess in Genealogy of the Holy War.