Artwork of Barst from 《聖火降魔錄英雄雲集》.

第2章: The Pirates of Galder (Shadow Dragon)
Chapter 5: Liberation of Grust (New Mystery of the Emblem)

“I got nothing to do with fighting now... Well, that's what I would say if you were anyone else.”
—Barst's recruitment in New Mystery of the Emblem

巴茲（Barst、バーツ）是以下遊戲可使用角色： the 阿卡奈亞系列 of 聖火降魔錄系列. In Shadow Dragon and the Blade of Light, Barst , alongside his two brothers, Bord and Cord, is a member of the Talysian mercenary group that is spearheaded by 奧古馬.

Barst makes his first appearance in Chapter 2 of Shadow Dragon and the Blade of Light, where he, alongside 奧古馬, Bord and Cord, enlists in 馬爾斯's army under the behest of Princess 希達 of Talys. Barst then aids Marth in bringing the War of Shadows to a conclusion, before returning to Talys to become a woodcutter. Some time later, according to Ogma, Barst departs in order to enlist in the Archanean army, before retiring shortly afterwards to become a pirate, the result of having tired of warfare.

According to his ending, Barst does not appear at all in the original Book 2. Owing to the fact that he did enlist himself in the ranks of the Archanean army, but then deserted to become a pirate. It could be hinted that he continued living his new life as a pirate during the time the War of Heroes took place, making him unable to take part in it.

Barst returns in Chapter 5 of New Mystery of the Emblem, where he is revealed to have taken up residence near Olbern Keep in the country of Grust, leading a peaceful life as a woodcutter. Initially appearing as an enemy unit, Barst will join Marth's army when spoken to by Ogma, Bord or Cord, in spite of his initial unwillingness to involve himself in the chaos of warfare. Barst will then assist Marth in bringing the War of Heroes to a conclusion, before vanishing without a word to anyone. He is rumoured to either have returned to leading a life as a simple woodcutter or taken to the high seas as a pirate, once again.

As is the case with a majority of the cast appearing in Shadow Dragon and the Blade of Light and Mystery of the Emblem, Barst's character is not well-developed, owing to the minor role that he plays. Based on the few interactions that he engages in, however, one can still deduce various points of his personality. For one, it can be observed that Barst is a rather indecisive individual, unable to craft solid directions to follow in his life; the end of the War of Darkness sees him constantly switching from one occupation to another rather rapidly, never seeming to gain any satisfaction from any of them. Through his recruitment conversations with either Bord or Cord in Mystery of the Emblem, his indecisiveness can be attributed to his dislike of the chaos of fighting, instead desiring to lead a peaceful life.

In spite of this, one can tell that Barst is a steadfastly loyal individual, regarding the bonds that he forges with others with a keen earnestness. This is the case with the subordinate-leader relationship that he shares with Ogma; upon being requested to aid Marth's army in the War of Heroes by his former captain, Barst readily agrees to do so with barely any sign of hesitation.

In his relationship with his two brothers, Barst cares about their sense of lifestyle. In his support with the Avatar, he tell him/her that his brothers have been living in the mercenary business for too long, which one can point out that he wishes for the best of both of them in finding something that can benefit their lives peacefully after the war concludes. Barst's indecisiveness in switching occupations from one to another and his dislike of violence is something he hopes to set as an example for his brothers in motivating them to live a peaceful life rather than being mercenaries for hire. When the War of Heroes came to an end, while not shown, it could be hinted that Barst managed to convince Cord, at the very least, as Cord's ending states that he managed to settle down as a woodcutter and preferred that life than the ravages of war.

Barst's strengths lie in his high base stats and his distribution of growth rates which allow him to build a respectable amount of HP and strength as a Fighter or Pirate, both of which Barst has a fairly low base growth rate in. In addition, when Barst joins, he already has a D Rank in Axes, allowing him to have a greater versatility by using D-ranked Axes from the get-go. Compared to Bord and Cord, both of which join at the same time, Barst has higher base stats and high enough of a weapon level to use an array of Axes early in the game without sacrificing significantly in either his skill or speed growth rates. All of these strengths combined means that, more often than not, Barst will be the premier choice for an axe user throughout the game.

When Barst promotes, he likely will already have a high HP and strength stat, which will give him a greater number of options to reclass into once he promotes. Aside from the Warrior class, Barst can reclass into a Berserker, which has the same growth rates as the Warrior class but allows Barst to cross water and mountains, though given Barst is unlikely to cap such a speed cap, which is the premier feature of the Berserker class, he may not prove to excel as a Berserker unless he is manually given multiple Speedwings. An alternate reclassing option is Hero; assuming Barst's strength stat is not below average by the time he promotes, he can reclass into the Hero class and have a much higher skill and speed by default, while benefiting from having already built his weapon levels in axes up by a fair amount. However, as a Hero Barst will have a much lower strength growth rate; if Barst's strength stat is not particularly high by the time he promotes into a Warrior, reclassing him into a Hero may not be the smartest idea.

The Hatchet
Warrior of Talys who works for Ogma and has been a pirate and woodcutter登場作品：Fire Emblem: Mystery of the Emblem.

In Shadow Dragon, Barst, along with Caesar, are the best choices for Warriors. Barst gets high HP and Strength, but generally does not cap them, and he also gets decent Skill and Speed as well. However, his Defense and Resistance are quite low, and so Dracoshields and Talismans are best used on him. Should one seek to reclass him, the Berserker and Hero classes are highly recommended, but only the Hero class after promotion. Reclassing him to Berserker is also a good idea for a Wifi team, because many faster units, such as Swordmasters, are commonly deployed.

In New Mystery of the Emblem, Barst is blessed with generously high growth rates, and will always cap HP and hit high values in Strength, Skill and Speed. The Berserker is a good reclassing option for him. It should, however, be noted that Barst has low defensive stats, including a 0% Resistance growth. Players should be careful to keep him out of the retaliation range of enemy mages as a result, especially during the earlier chapters of the game.

Talys Brave
He joined the Archanea army, but later abandoned his post. It is rumoured that he became a pirate…

The Hatchet
Barst briefly enlisted in the Archanean army, but later deserted- to become a pirate, by some accounts.

The Hatchet
Barst vanished, rather than go to Talys. Stories tell of him being a woodcutter, or sailing the high seas to a distant land.

Barst is illustrated in the trading card game with the following card:

Official artwork of Barst from the TCG. 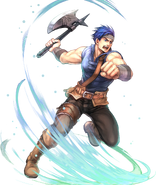 Animation still of Barst in the Fire Emblem anime, where he is seen stopping Gazzak from escaping with Bord and Cord.

Barst as a Fighter in Fire Emblem 0 (Cipher).

Barst's portrait in Shadow Dragon and the Blade of Light.

Barst's portrait in Mystery of the Emblem.