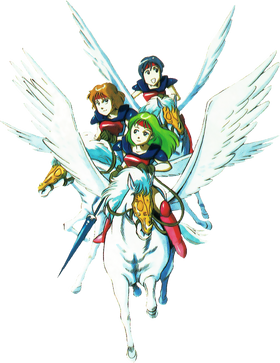 Artwork of the Whitewing sisters from 聖火降魔錄外傳. 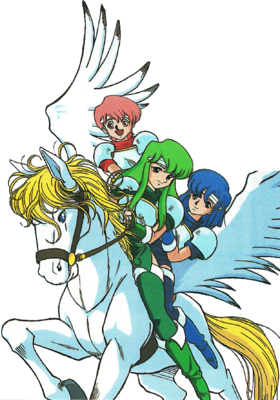 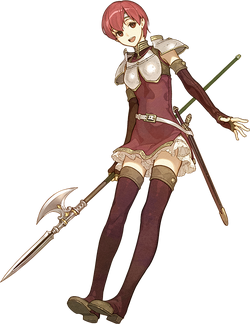 “My sisters say that being the youngest, I’m good at adapting to situations, but being adaptable doesn’t mean much when your luck is as terrible as mine! They think I’ve had it pretty easy, but it’s actually been tough for me. I have to admit, sometimes I wish they could understand that a bit more…”
—Est in Echoes

In 聖火降魔錄 覺醒, Est is the first DLC character for the Second Series DLC Pack and was illustrated by Kinu Nishimura.

Est is the youngest of the Pegasus Sisters of 馬其頓 under 米奈娃's command. Unlike her elder sisters 帕奧拉 and 卡秋雅, she joins late in the game, as she decided to steal Mercurius before returning. She falls in love with the knight Abel, and eventually marries him and moves to Altea.

She and her sisters also appear in 聖火降魔錄外傳. According to Est, Palla, and Catria's base converstions in the remake, Est had left the Whitewings the day after the War of Shadows, wanting to open up a shop with Abel and live a normal life. Unfortunately, Est ends up getting captured by Grieth, and her sisters follow the pirate ship to rescue her, but they lose sight of it near Zofia Harbor. Jesse tries to save Est, but gets captured. After 賽莉卡's party rescues Jesse, they travel to Grieth's fort, defeat Grieth, and save Est. After the war, she returns to Archanea with her sisters, but promises to come back some day.

In Mystery of the Emblem, Est is captured by the Archanean army to force 阿貝爾 to fight against 馬爾斯. She can be rescued and once again fight alongside Marth's army. After the war, she leaves Abel and vanishes, leading him to disappear in search of her.

As the youngest of the three Whitewing sisters from Archanea, Est is pure and innocent and often gets told off by her sisters. One such example is in her supports with Catria, as she keeps showing junk that she seems to genuinely believe is special.

Though she is cheerful and chatty with a straight-forward personality, the repeated captures take a toll on Est's self-esteem. After she is rescued in Chapter 15 of New Mystery of the Emblem, her support conversations with her husband and her sisters show that she believes that she is a burden to him and doubts her worth to even be his wife. It is strongly implied that the reason she disappears after the War of Heroes is because she believes that Abel would be better off without her, and it is likely that she returned to Valentia.

Though she often gets into trouble, Est regularly mentions that she wants to stop being a warrior, settle down, and run a shop with her husband.

白騎的么女
Youngest of three sisters who are pegsasus knights for Macedon登場作品：Fire Emblem: Mystery of the Emblem.

Est, and her sisters 帕奧拉 and 卡秋雅, are all Pegasus Knights recruited in 賽莉卡's route. When considering all of the Pegasus Knights in Gaiden, Est and Catria are both strong all rounders whose balance between Speed and Strength usually makes them the most offensively potent. Palla is strong and durable but slow for a Pegasus Knight, and Clair is very agile but fragile.

In Gaiden, Est is the most statistically impressive of the Pegasus Knight sisters, having the single highest growth rates in the game and by quite a lot at that. She will start out much weaker than her sisters if you leveled them at all, and will require some babysitting until she gains half a dozen levels. However, if you do choose to level her, she will easily become the most powerful of her sisters, beating them both in all stats except for HP. Catria and Est will usually wind up even in stats or separated by 1 or 2 points in almost everything. The only stat that really separates the two is Defense, which Est will have a lot more of.

The two problems with Est are her late recruitment and low level. If you put in the effort of bringing her up to speed, she will not disappoint. Not only is she the most powerful among her sisters, but she is among the most powerful in the entire game. However, Catria is nearly as good as her and is available for almost the entire game. While Palla is statistically inferior to her sisters by a moderate margin, her availability may prove more useful overall than Est's statistical superiority. So while Est does have the most potential, her late recruitment means players may opt not to level her.

In Fire Emblem: Shadow Dragon, both of Est's sisters have their growths raised significantly, while Est's growths have stayed the same. This, due to her low starting stats, usually makes her less useful than in the original. However, she still has a great deal of potential, if properly trained at an arena.

Otherwise, she joins extremely late but has nice growths, and comes with a Ridersbane in a chapter where the enemy is filled with cavalry. Reclassing her to myrmidon or 弓手 are also common choices because she has high growths fit for a swordmaster or sniper with that much higher maximum stats for speed and skill which cancels out that lower strength.

“Sorry, General. My place is with the commander.”
—Est's withdraw quote in Chapter 7 in Shadow Dragon

“Are my sisters with you?”
—Est's recruitment quote in Awakening

“Commander... I gave it my all...”
—Est's death quote in Shadow Dragon

“I'm hurt..Go on without me Commander! I must withdraw”
—Est's retreat quote in Chapter 7

Little Sister - Est
"Est fell in love with an Altean knight, and found that the path of the heart was a surer route to happiness than that of the spear."

(If both Palla and Catria are alive)
'I'll definitely come again! Thank you, everyone~~'
No matter where she goes, Est always remains upbeat.

(If one or both are dead)
'Big sister(s)...'
Remembering the older sister(s) who had died for her sake, Est wept.

(If both Palla and Catria are alive)
Successfully reunited with her sisters, Est returned home in triumph. Tales of her further exploits line the pages of Archanea’s history books.

(If Palla or Catria died)
Though painful loss hung over her return home like a dark cloud, the annals of Archanean history are replete with tales of Est’s glorious exploits later in life.

Wayward Knight
"After the war, Est said her goodbyes to Abel, for reasons known only to her and disappeared."

(If Abel is dead)
"Unable to bear the sadness of losing Abel, Est disappeared after the war"

Est is illustrated in the trading card game Fire Emblem Cipher with the following cards:

In the French and Italian language, Est means east, as in the cardinal direction. In both French and Latin, Est also means is.

Concept artwork of Est from Echoes: Shadows of Valentia.

Artwork of Est from The Complete.

Est as she appears in the original Trading Card Game.

DLC artwork of Est by Kinu Nishimura from 聖火降魔錄 覺醒.

Artwork of Est as she appears in 《聖火降魔錄英雄雲集》. 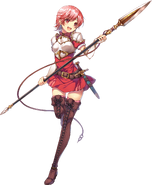 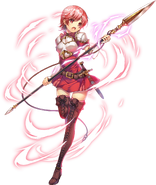 Artwork of Est as she appears in Fire Emblem Heroes. 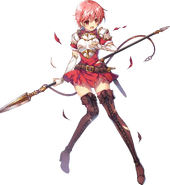 Artwork of Est as she appears in Fire Emblem Heroes.

Artwork of Est along with her two sisters in The Complete.

An illustration of Est (along with 卡秋雅 and 帕奧拉) that appears in the Fire Emblem Memorial Book Archanea Chronicle.

Est as a Falcon Knight by Fuzichoco.

Est as she appears in the TCG.

Another card of Est.

Est as a Falcoknight in the Cipher Trading Card Game.

Est as a Pegasus Knight in the Cipher Trading Card Game.

Est as a Pegasus Knight in Fire Emblem 0 (Cipher).

Est as a Falcon Knight in Fire Emblem 0 (Cipher).

Est as a Pegasus Knight in the One Hundred Songs of Heroes Karuta set. 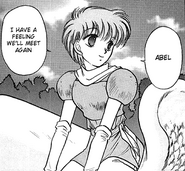 Est as she appears in the Shadow Dragon and the Blade of Light manga adaptation.

Est's portrait in Shadow Dragon and the Blade of Light.

Est's portrait in New Mystery of the Emblem.

Est's portrait in Shadows of Valentia. 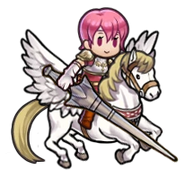 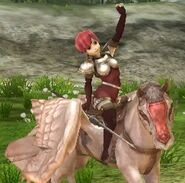 Est's battle model as a Pegasus Knight in Echoes: Shadows of Valentia. 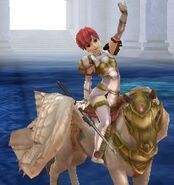 Est's battle model as a Falcon Knight in Echoes: Shadows of Valentia.
在此图库中添加照片