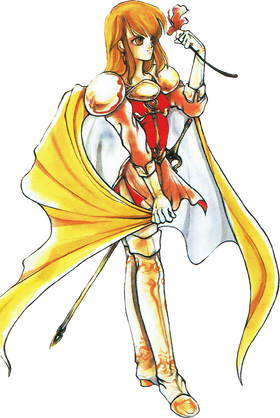 Chapter 1: Girl of the Spirit Forest (joins in Chapter 2: Disturbance in Agustria)

“That Elliot just can't handle the fact that I'll have nothing to do with him. God, I can't stand conceited men like him. I need a man the calibre of my dear brother. That's why I'll never marry.”
—Lachesis in Genealogy of the Holy War

Lachesis (ラケシス, Rakeshisu; romanized as Rackesis in the Fire Emblem Museum and Fire Emblem Treasure, and called Raquesis in 聖火降魔錄 覺醒) 是以下遊戲可使用角色： 聖火降魔錄 聖戰之系譜. She is the princess of Nordion and the younger half-sister of 艾爾多尚. She adores her brother to the point that she believes that she will never marry due to knowing a man like him. If she is paired up, her children will be her son Diarmuid and her daughter Nanna.

Lachesis is first seen when Eldigan and the Cross Knights depart from Nordion Castle to fight against the Heirhein army led by Elliot in Chapter 1. She later appears in Chapter 2 when she attempts to stop Eldigan from negotiating with King Chagall in order to prevent a war between Agustria and Grannvale from occurring. Lachesis mentions that Chagall murdered his own father and therefore would not listen to anyone, but Eldigan ignores her concerns and departs for Agusty. When she learns that Eldigan has been imprisoned in Agusty for angering Chagall, she also discovers that Elliot is taking advantage of the situation to invade Nordion under orders from his father. She decides to defend Nordion Castle along with Eve, Alva, and Eva, the three knights whom Eldigan left behind to protect her. Around this time, she requests aid from 西格爾特, who is stationed in a castle within Verdane that is close to its border with Agustria.

Once Sigurd comes to her aid, Lachesis asks him to rescue Eldigan, and joins his army. If her three guardian knights survive until the end of the chapter, she receives the Knight Ring from them before they return to Nordion. During Chapter 3, she can convince Eldigan to stop fighting Sigurd and instead try to convince Chagall to end the war as soon as possible. However, this ultimately results in Eldigan being decapitated by the king, leading Lachesis to declare that she will never forgive Chagall.

Lachesis survives the Battle of Belhalla and thereafter brings Nanna to Leonster to live with Finn, while Diarmuid is sent to stay with the other initial members of the Liberation Army in Isaach. She becomes a surrogate mother of sorts for Leif during this time, and seems to become acquainted with Selfina. Eventually, Lachesis decides to reunite with Diarmuid and begins a journey across the Yied Desert, during which she mysteriously vanishes without a trace. Although her fate is never revealed, it is suggested from a scrapped idea originating from Fire Emblem: Thracia 776 that she may have been captured by the Loptyrian Cult and turned to stone. While Diarmuid reveals in both of games that he learned from Lewyn that she disappeared, he states in Thracia 776 that she may still be alive somewhere with her whereabouts unknown.

Lachesis is a sarcastic and sharp-tongued individual with a strong will. She also has a strong sense of pride and prefers to make her own choices, rather than letting others decide for her. She seems to be more willing to open up to others if they personally know Eldigan, as seen by her changed behavior towards Beowolf once he says that he is his friend. She does not consider Chagall to be her king and despises him. She declares that she would rather die than marry Elliot, who is infuriated by her rejection.

Lachesis initially starts out as an extremely weak unit that is difficult to train. She joins you as an underleveled level 2 unit with mediocre starting stats other than her Speed. Additionally, her growths are actually very weak, with only Strength and Luck being above average and her being among the bottom 5 for overall growths in the first generation. Compounding this problem is the fact that on the map you recruit her, she has 3 Paladins following her around attacking all enemy units in range other than Bosses. These circumstances make it difficult for her to attack anything and she will mostly be stuck as a healer until she reaches level 20. The Paladins slaying enemy units means lost EXP for your other characters. Even worse, if any of them die, Lachesis will miss out on the Knight Ring, which allows a foot unit to finish using their Movement and equip different weapons after attacking much like a mounted unit would. Since she will become mounted upon Promotion, it is probably best to sell this item to another character such as Sylvia or 艾伊拉. Many players will opt to keep her away from combat on the map she is recruited to protect her Paladins and secure the Knight Ring.

There are, however, some options to train Lachesis quickly and bypass her weak beginnings. She can engage in Boss Abuse by repeatedly healing injured characters wounded by Macbeth, or by eventually engaging him herself when she can afford to take a hit from him. Dew can give her any gold he has obtained from enemies or villages, and Edain can sell her the Warp staff which will give her 35EXP per use. She can stand outside of your home castle and repeatedly use the staff on a character to boost her levels. Another option is to give her the Elite Ring that is obtained in the same chapter to double her EXP gain, though the item is very expensive and it will probably not be possible for Lachesis to easily land a killing blow on Voltz.

Once Lachesis hits Promotion, she will become amazing. She receives an astonishing +25 to her stats, becomes mounted, gains 3 Movement, and promotes to the best class in the game: Master Knight. Master Knight allows her A-level use of all weaponry other than Light and Dark magic, where she will be able to use C-level Light magic. At this point she will arguably become one of your best units due to her huge boost and high versatility.

The problem, however, lies in actually getting her there, and the boss abuse and turn wastage required to do so may be unappealing to those aiming for a low turn count. Ultimately, while she remains viable in casual playthroughs due to her massive promotional gains, actually grinding her up to promotion is a headache many efficiency runners despise having to go through (and therefore avoid).

It is highly advisable for Lachesis to speak to 艾爾多尚 in Chapter 3 to not only receive the Earth Sword, but to have him leave the battlefield permanently.

Finding a suitable partner for Lachesis can be a bit tricky, as she has a few obstacles that make it difficult for a male to be a good fit for her. Her daughter Nanna is a Troubadour that ideally wants well rounded stats with a respectable Magic stat, while her son Diarmuid is a Free Knight that will generally want more impressive physical stats than Nanna, though depending on his father he might wind up being pretty good at wielding Magic Swords, a rare trait for units in Genealogy of the Holy War. The children will generally require a father with Pursuit, since Lachesis does not have it and it severely limits her children if they do not inherit it.

Lachesis is best paired with Beowolf or Azelle. Alec is a a convenient fit, but he is essentially a worse version of Beowolf. Naoise, Finn, Lex, and Claud can be decent choices that have some flaws. The rest are generally poor fits either due to a lack of Pursuit, no inheritable weapons, or poor growths.

In Chapter 2, if Sigurd speaks to Lachesis, she will be recruited.

In Chapter 2, after Lachesis is recruited, if Dew does not have a lover, Dew may speak to her to initiate a conversation, in which she will gain the Thief Sword and 50 love points with him.

In Chapter 2, after Amphony Castle is captured, Beowolf may speak to Lachesis, resulting in her gaining two points of Strength, two points of Skill, one point of Defense, and 100 love points with him.

In Chapter 3, if Lachesis speaks to Eldigan, Eldigan will leave the battlefield, and she will receive the Earth Sword.

In Chapter 5, after Phinora Castle is captured, if Lachesis' lover is either Beowolf, Naoise, or Dew, she may speak to her lover, but nothing will result of it.

Lionheart's Sister
Lady of House Nordion. Adores her older brother, Eldigan, to the point that other men pale in comparison登場作品：Fire Emblem: Genealogy of the Holy War.

“Was there something you need?”
—Lachesis, in Awakening

“Come no closer, you swine!”
—Fighting Lachesis in Awakening

“You'll help me find my brother?”
—Recruitment quote in Awakening

Lachesis is illustrated in the trading card game with the following cards:

In Greek mythology, Lachesis was the second of the Three Fates, otherwise known as the Moirae. They were white-robed personifications of destiny, who controlled the metaphorical thread of life of every mortal from birth to death. Lachesis measured the thread of life with her rod. The name Raquesis is simply a corruption of this name, with a French spelling to possibly signify Lachesis' dignity and nobility.

Lachesis as she appears in 《聖火降魔錄英雄雲集》. 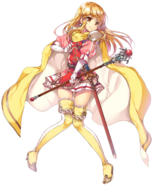 Artwork of Lachesis from Fire Emblem Heroes by Miwabe Sakura. 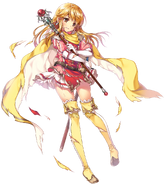 Artwork of Lachesis from Fire Emblem Heroes by Miwabe Sakura.

Artwork of Lachesis from Fire Emblem 0 (Cipher) by kawasumi.

Artwork of Lachesis by kawasumi in Fire Emblem 0 (Cipher) by kawasumi.

Artwork of Lachesis by kawasumi in Fire Emblem 0 (Cipher) by kawasumi.

Lachesis as a Princess in the One Hundred Songs of Heroes Karuta set.

Lachesis as she appears in the first series of the TCG as a Level 1 Princess.

Lachesis as she appears in the second series of the TCG as a Level 10 Princess.

Lachesis as she appears in the third series of the TCG as a Level 20 Master Knight.

Lachesis as a Princess in Fire Emblem 0 (Cipher).

Lachesis as a Master Knight in Fire Emblem 0 (Cipher).

Lachesis as a Master Knight in Fire Emblem 0 (Cipher).

Lachesis' portrait in Fire Emblem: Genealogy of the Holy War. 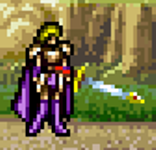 Lachesis' battle model as a Princess in Fire Emblem: Genealogy of the Holy War.