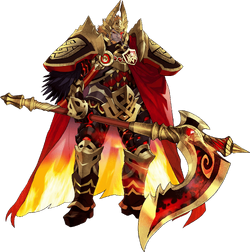 Surtr is the king of the Kingdom of Flame Múspell and relentless in his conquest. He waged war upon 尼福尔, the Kingdom of Ice. He first appears the end of Book II, Chapter 1, where he burns up many fields and forests and defeats 菲约尔姆. He is planning to destroy other kingdoms, particularly setting his sights on Askr, having already destroyed 2 in 9 months, the first being an unnamed Kingdom in 3 months, and Nifl in 6. He is currently unable to be defeated as he carries a skill similar to Embla's Ward, called Múspellflame, which means he takes 0 damage from combat and passives, like Savage Blow and Poison Strike, and his signature weapon Sinmara deals 20 damage to all units within 2 spaces at the start of each turn. Surtr has also allied himself with 维洛妮卡 and the 恩布拉帝国 , as stated by her in Chapter 1, Part 4 of Book II.

Surtr prefers to slowly torture and kill his enemies as he forces Fjorm’s mother to burn up slowly and painfully in front of Fjorm's eyes. Surtr also gets bored easily, as shown by his disinterest in killing the Ice Princess, since she is defeated too easily by him.

阿尔冯斯 and 安娜 both state that this is the prophecy in which the entire world comes to an end in flames, prompting them to take on the Flame King himself, however they are forced to retreat upon failing to even harm him. He is also the superior of 洛基, the antagonist who appeared during the first Tempest Trials, and the father of 瑞瓦提恩.

In Norse Mythology, Surtr is a Jötunn (specifically a Fire Giant) best known for wielding a sword comprised of flames. 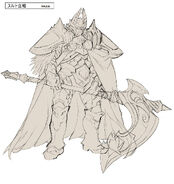 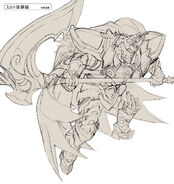 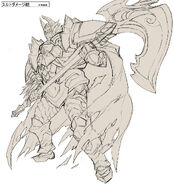 Mugshots of Laevateinn and Surtr. 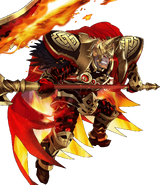 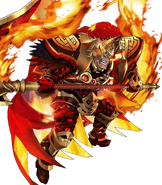 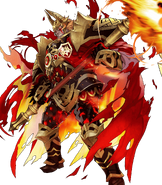 A close up shot of Surtr during the Book II cinematic.