“I'm no good at getting help when I need it. That's the problem with seeking perfection. You always feel like you have to do everything alone.”
—Subaki in a support conversation with the Avatar

椿（Subaki、ツバキ） 是以下遊戲中可使用的角色：聖火降魔錄if on the Birthright and Revelation routes. One of 櫻's personal retainers, Subaki seeks perfection in all that he does in order to uphold the legacy of his family. If he achieves an S support, he will bear a daughter named Caeldori with his spouse.

Subaki was born into a family belonging to the upper echelons of 白夜王國, one that is renowned for having served the royal family for generations. Following the footsteps of his ancestors, Subaki is thus instated as one of Princess Sakura's personal retainers.

Subaki makes his first appearance in Fort Jinya in Chapter 7, where he, alongside his fellow retainer 風花, aids Sakura in tending to the injuries of wounded soldiers and citizens. After receiving news of a Nohrian invasion that has broken out near Fort Jinya, Subaki is engaged in a squabble with Hana, during which they argue over the superiority of their usefulness on the battlefield. Shortly after their quarrel is broken up by Sakura, Subaki accompanies his liege, Hana and the Avatar out of the fort to stage a defence.

Subaki subsequently aids the Avatar's effort to put an end to the age-old conflict shared between Hoshido and Nohr.

Subaki only appears in Chapter 22, where he, alongside Sakura, Hana and Yukimura, stages a defence in Fort Jinya in a bid to halt the Nohrian invasion. When engaged in battle by the Avatar, Subaki will reveal that in spite of their betrayal, Sakura has continued to hold nothing but the highest opinion of them. He then quietly vows to personally defeat the Avatar in order to end his liege's sorrow. Despite the best efforts of both Subaki and the rest of the Hoshidan army, they are eventually defeated and taken prisoner.

When Hans starts executing prisoners, it is mentioned that Yukimura, Sakura, Subaki and Hana were fortunately spared from Hans' wrath. It is unknown what happens to him afterwards.

Subaki first appears at the end of Chapter 8, where he and Hana pursue Sakura after the latter wordlessly departs from Fort Jinya to ally herself with the Avatar's cause. Upon catching up with her, he immediately expresses relief before proclaiming that he and Hana will always support her in all the decisions that she makes.

Subaki subsequently aids the Avatar's effort to put an end to Anankos' machinations.

In Paralogue 13, Subaki reunites with his daughter Caeldori after not having seen her for ages. While in the midst of catching up with her, Subaki is summoned by a Hoshidan soldier to the Riverside to aid in quelling an enemy attack. Caeldori attempts to follow her father, only to be stopped as he urges her to remain behind for the sake of her safety. She later defies Subaki's orders, entering the battlefield and leaping into the fray to aid him. Following the conclusion of the battle, Subaki fawns over his daughter's achievements, expressing praise and admiration. Upon hearing her narrate details on the post-battle activities that she has engaged in, Subaki begins to feel inferior to her, mentally resolving to push himself in order to prevent her from surpassing him.

Subaki is a self-professed perfectionist, a fact that primarily stems from the legacy of his family's traditions, ones that have conditioned him to strive towards achieving perfection in all that he does. As a result of this, Subaki is known to be very demanding and even unforgiving towards himself as he works tirelessly to meet the harsh expectations that he sets for himself. This has in turn caused him to have the tendency to engage in self-reproach whenever he commits "offences" that he feels make him appear weak and imperfect in the eyes of others. During such occurrences, Subaki is known to lapse into a state of flustered distress as he attempts to rectify his shortcomings.

In spite of the excessive nature of his hardworking spirit, Subaki never draws attention to himself, choosing instead to hide his efforts from the notice of others. As a result of the attitude and behavior that he adopts towards others, Subaki can come across as being more obnoxious and arrogant than he actually is.

He has the cleanest hands in the army. His birthday is February 7.

Subaki boasts decent growth in Skill and HP and has middling Strength and Defense. Unfortunately, he suffers from low Resistance and oddly, a poor Speed growth, an unusual trait for a Sky Knight unit. His Personal Skill, Perfectionist, increases his hit and avoid rates by 15 points whenever he is at full health. Unlike 火乃香, whose growths resemble those of classic Pegasus Knights and has stronger growths across the board, Subaki can occupy a defensive niche that is unusual for his base class. In tandem with Perfectionist's avoid bonus, Subaki's middling growths in HP and defense can mold him into a passable dodge wall, granting him the ability to absorb physical hits more reliably than most of his allies in Birthright. However, he still is vulnerable to 弓/Yumi wielding units so mindful awareness of those units will minimize the risk of his death. His ability to wield naginata provides him some additional defense from the weapon's innate stat bonus. His base class offers two skills: Darting Blow and Camaraderie. He can utilize Darting Blow defensively by preventing his enemies from doubling attacks on him whenever he needs to initiate combat. Although the healing bonus from Camaraderie is only slight, it can help prolong Subaki defensive presence in the front lines.

One of Subaki's promotion options is the Falcon Knight class. As a Falcon Knight, Subaki gains a slight increase to skill growth as well as weapon access to staves and rods. Combined with his decent skill growth and Perfectionist's hit bonus, Subaki's newfound rod access allows him to accurately provide offensive support role through status ailment rods, such as Silence or Hexing Rod. The Falcon Knight class offers two skills: 速度支援 and Warding Blow. Rally Speed allows Subaki to switch to a defensive support role whenever necessary. Warding Blow somewhat patches Subaki's poor resistance and encourages him to attack magic-users at a greater frequency. Overall, the Falcon Knight class extends Subaki's versatility, but it does not necessarily highlight his strengths.

Subaki's second promotion option is the Kinshi Knight class. As a Kinshi Knight, Subaki gains a moderate increase in his skill growth at the cost of reduced growths in his weaker stats. He also gains weapon access to 弓s and yumi. The class offers two skills: Air Superiority and Amaterasu. Air Superiority syncs well with Perfectionist and considerably increases Subaki's combative capabilities against flying enemies, enabling him to reliably wall, bait, or even attack physical flying units (bar other Kinshi Knights). Amaterasu nicely complements Camaraderie and encourages Subaki to play defensive roles in close proximity to his allies. Overall, the Kinshi Knight class plays up Subaki's strengths and expands on his defensive capabilities, especially against flying units.

Subaki's growths may be better suited in his alternate class set: the Samurai class set. Compared to his growths as a Sky Knight, Subaki gains increased HP and skill growths. He gains weapon access to 劍s and katana while losing access to lances and naginata. Switching into the Samurai class also notably removes various weaknesses associated with the flying and beast attributes. The Samurai class offers two skills: Duelist's Blow and Vantage. Duelist's Blow syncs very well with Perfectionist and Darting Blow, and it encourages Subaki to take on an offensive role in addition to his role as a dodge wall. Vantage may help Subaki in a pinch, especially when he has lost access to Perfectionist bonuses.

One of the Samurai's promotion options is the Swordmaster class. As a Swordmaster, Subaki notably gains 10-point increases to critical hit rate and avoid rate. The critical hit rate bonus syncs well with Subaki's decent skill growth, allowing Subaki to activate critical hits at a satisfying frequency. The Swordmaster class offers the 流星 and Swordfaire skills. Thanks to his aforementioned skill growth, Subaki may see Astra activation at a greater frequency than others, and it further augments his offense. Should Subaki's career class carry a sword, Swordfaire will add a sizable bonus to his damage output. The Swordmaster class effectively utilizes Subaki's skill growth and provides various offensive assets that play up his strengths.

The Samurai's second promotion option is the Master of Arms class. As a Master of Arms, Subaki gains increased growths in HP, skill, and defense. Additionally, Subaki gains access to lances, naginata, 斧s, and clubs; granting him effective control over the weapon triangle—which entails opportunities to exploit weapon advantage for additional hit and avoid bonuses. The class grants offers th Seal Strength and Life and Death skills. Seal Strength greatly complements Subaki's physical and augments his ability to serve as an effective physical wall or physical attack bait. Because Life and Death compromises Subaki's defenses for increased damage output, it does not fit well with his defensive playstyles. Overall, the Master of Arms class greatly highlights Subaki's stronger stat growths and helps solidify his defensive capabilities.

Perfect Expert
Sky Knight of Hoshido who aims for perfection. One of Sakura's retainers登場作品：Fire Emblem Fates.

Subaki is illustrated in the trading card game with the following cards:

Tsubaki is the Japanese word for Camellia. Depending on the language, this can have different meanings:

Artwork of Subaki from the 4koma Book. 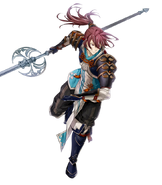 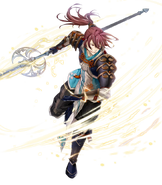 Artwork of Subaki from Fire Emblem Heroes by Yura. 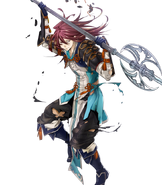 Artwork of Subaki from Fire Emblem Heroes by Yura.

Subaki as a Sky Knight in Fire Emblem 0 (Cipher).

Subaki as a Falcon Knight in Fire Emblem 0 (Cipher).

Subaki as a Sky Knight in Fire Emblem 0 (Cipher).

Subaki as a Falcon Knight in Fire Emblem 0 (Cipher).

CG artwork of Subaki in the Nohr Festival DLC episode. 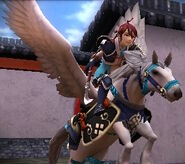 Battle model of Subaki as a Sky Knight.