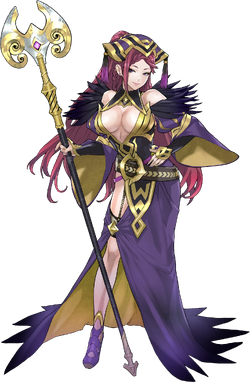 “I am Loki, loyal servant of His Royal Highness, King Surtr. Please to make your acquaintance. I'm even more pleased to bid you farewell... Though I must apologize, I suppose. You'll be dying here.”
—Loki

洛基（Loki） is a character from 聖火降魔錄英雄雲集. She is first introduced by apparently disguising herself as 布魯諾, 安娜, 阿爾馮斯, and 夏蓉. She initially keeps her true form hidden, but appears as her true self in Book II of the main story.

In Xenologue 2, she is seen discussing the Tempest with 維洛妮卡 while disguising herself as Veronica's brother 布魯諾. Veronica quickly sees through her disguise and questions her true identity; as she knows that her brother is elsewhere. She then takes the forms of 夏蓉 and 阿爾馮斯 while expressing her surprise at her seeing through her illusion so quickly before she decides to settle on 安娜's apparance. She tells Veronica that her name is Loki and also tells her that she will have to wait if she wants to see her true form. Loki mentions the rite for the Tempest, and Veronica agrees to do it. She expresses joy at seeing that Veronica knew about the Tempest all along and also tells her that she likes her.

First appearing in Chapter 1, Loki is about to finish Fjorm, when the 特務機關 confronts her. Removing her disguise and revealing her true form for the first time, she challenges the Order. After she is defeated, Loki is forced to retreat, noting that she has taken an interest in the 召喚者.

She returns in Chapter 2 to challenge the Order again, and this time she allied with King Surtr and 瑞瓦提恩.

"Loki" was the name of a giant known for his mischief in Norse Mythology, and both him and this character share the ability to deceive others by disguising as other people. Loki in Heroes is the second character named after this Norse figure, with the first being Loptyr in Genealogy of the Holy War. 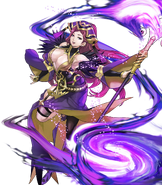 斯爾特, 維洛妮卡, Loki and 瑞瓦提恩 as seen in the Book II cinematic for Fire Emblem Heroes.

A close up of Loki as seen in the 聖火降魔錄英雄雲集 Book II cinematic.