Azama as he appears in 聖火降魔錄英雄雲集.

“Oh ho! That's an interesting argument. I agree that it can be sad when another entity leaves this plane of existence. But I am comforted by the very nature of the universe! We are all mere manifestations of a much larger consciousness, of course.”
—Azama's A-Support with the Avatar

淺間（Azama、アサマ）是以下遊戲中可使用的角色：聖火降魔錄if on the Birthright and Revelation routes. One of 火乃香's personal retainers, Azama is an aloof, acerbic, and philosophical monk with nihilistic views on the world.

One of 火乃香's retainers, Azama is a priest with a barbed tongue that belies his seemingly well-mannered personality.

Azama is known to be the second son of a priest based in an unnamed shrine. Prior to the events of Fates, as a result of his ill behaviour, he was forced to ascend a number of mountain ranges, during which he found penance and developed a calm, serene demeanour that is considered befitting of a priest. While meditating on one of these mountains one day, Azama encountered 火乃香, who had been injured due to unknown causes. This prompted him to heal her wounds to the best of his abilities before taking her to safety. Departing immediately after rejecting Hinoka's offer to reward him, Azama left the impression that he was a wise, selfless priest, a fact that later saw Hinoka deciding to hire him as one her direct subordinates.

Azama also possesses a powerful charm that he obtained from a holy deity during one of his meditations, although he is not able to use it for "entirely selfish" purposes.

If he achieves an S-Support, he will conceive a daughter named Mitama with his spouse. In his supports with her, Azama reveals his eyes share the same star pattern as hers.

Azama first appears in Chapter 8, where he, along with 剎那, accompanies Hinoka on a mission to join up with 龍馬 and 拓海's forces. While attempting to pass through the region that the Wind Tribe Village is situated in, the group runs headlong into the conflict that arises between the Wind Tribe and the Avatar's forces. The group is introduced at this juncture in a rather comical fashion, with Setsuna absentmindedly getting ensnared by quicksand and Hinoka attempting to help her while exasperatedly chastising Azama for his lighthearted, sardonic regard of the situation.

Azama first appears in Chapter 11, where he, along with Setsuna, accompanies Hinoka to defend the Rainbow Sage from the Avatar's army. The defence staged by the Hoshidans fails, and Azama, alongside his comrades, retreats thereafter.

Azama appears yet again in Chapter 24, where he and Setsuna aid Hinoka in the defence of Castle Shirasagi. Although he initially makes light of the situation, Azama adopts a sombre demeanour as he resolves to protect Hinoka from coming under harm. Despite their valiant efforts, the Hoshidans are defeated by the Avatar's army. Hinoka unhesitatingly steps before the Avatar and demands that they take her life but spare those of her soldiers. The Avatar responds by pretending to slay Hinoka with the Yato, and thereafter urges her to flee with her retainers.

Azama first appears in Chapter 16, where he, Setsuna and Scarlet follow 龍馬 and Hinoka's lead and enters the Lava Fields to provide aid to the Avatar.

Azama subsequently aids the Avatar's effort to put an end to Anankos' machinations.

Azama appears in Paralogue 12, where he, aware that his daughter Mitama's village is under attack, expresses his fear and anxiety to 彩造. Initially inappropriately philosophising that death will eventually occur to everyone, Azama is snapped back to reality by Saizo, who urges him to lead his daughter's rescue. A battle thereafter ensues when Azama and Saizo enter the village and notice that it is overrun by a horde of invisible enemies. During the course of the battle, a series of three comical exchanges will be shared between Azama and his daughter each time he visits her "perfectly sound house". These exchanges see Azama trying to convince Mitama to flee her dwellings unsuccessfully due to her desire to sleep before finally succeeding on his third attempt. Following the conclusion of the battle, Azama stops Mitama from returning home, insisting that she continues to aid the army with her healing abilities.

Despite holding the position of a priest who is expected to represent the values of benevolence and compassion, Azama defies such expectations, as he adopts a demeanour of breezy apathy in his regard of others, heavily employing sardonic wit and black humour in his speech. Indiscriminate in the disagreeable manner by which he treats people, Azama is known to delight in making biting remarks that induce pronounced discomfort, and even his liege and social superior 火乃香 is not spared; through his supports with her, he reveals, albeit rather disturbingly, that her positively charming look of fury and frustration during their first meeting as she fought to preserve her life was what compelled him to rescue her.

Azama's sardonicism is deeply steepled in the realm of nihilism, where he airily considers life to be devoid of any meaning or purpose. Apart from him cheerfully remarking that "death comes for everyone" when he defeats an enemy unit, Azama's nihilistic inclinations are also best illustrated through his supports with various characters. His supports with the Avatar is one such example, as he, after dismissively stating that death can be a sad affair, casually reveals his belief that he, alongside every other life form, is merely a manifestation of a larger conscience.

Taking up the art of meditating as a hobby, Azama enjoys retreating from the company of others and engaging in the act during his free time. Using meditation as a means of escapism to avoid the chaos of warfare, Azama is known to become irritable when he is interrupted in the practice, a fact that surfaces through his supports with the Avatar.

Azama is the only one out of the whole army that never cries. His birthday is September 8.

Azama is a unit that does not start with the usual Magic and Luck that most healers possess. While his Magic growth is not on par with other healers, this fact does little to hamper his usefulness, considering that HP recovered with Rods does not scale much higher with Magic. Given Azama's stat profile, he is best utilized as a frontline tank while providing support to the other frontline tanks/bruisers. While he cannot effectively deal with magic users due to his low Resistance, his personal skill acts as a free counter as long as he has no weapon equipped. In addition to these strengths, his solid Speed and Defense growths allows him to prevent foes from performing double attacks, alongside enduring stronger attacks. His high Strength growth can prepare him for his Great Master promotion.

Azama gains natural access to two promotions: the Great Master and Onmyoji classes. The Great Master befits him better, primarily due to the fact that it allows Azama to wield a physical weapon to exploit his high Strength. As a Great Master, he can learn Renewal, a skill that complements his role as a frontline tank by consistently replenishing any HP that he loses. He can also learn Countermagic, a skill that offsets his low Resistance by permitting him to deflect any damage inflicted upon him by magic users.

As an Onmyoji, Azama can focus on becoming a more magic-oriented unit. While his Magic growth is increased, it is not raised by a huge margin in this class, resulting in him not being able to inflict much damage as compared to other magic users.

Azama's secondary class set is the Apothecary, entailing the Merchant and Mechanist promotions. Reclassing him into an Apothecary allows him to use his physical power to its fullest potential early at the cost of not being able to use staves. While Azama becomes more durable as an Apothecary, his Speed will be lowered, and he will thus be unable to perform double attacks prolifically. In this class, the skills that he stands to gain are utility-based, involving the use of consumables like Vulneraries and Tonics. Quick Salve, for one, allows Azama to perform another turn of action after consuming an HP recovery or stat-boosting item.

Promoting him to a Merchant can be decent, since it only takes a slight amount of his Speed growth away while boosting his Luck growth to help with his main skill in this class; his stat growths are balanced all around, with the exception of his lacklustre Resistance. As mentioned before, his newly found Luck growth boost can help with his main skill in this class, Profiteer; it will trigger fairly frequently, but his Luck all around is not high enough to make it reliable. That in turn will help his second learnt skill, Spendthrift; this ideally can help with high Defense enemies if attacking, or high Magic enemies if defending. However, as mentioned before, it requires faith in the triggering of Profiteer; otherwise, it will be useless.

As a Mechanist, on the other hand, his physical Defensive capabilities and Strength are limited, due to the reduction in their growths; however, he benefits from a surge of Resistance and Skill growth, allowing him to be able to stand his ground against Mages. The best playstyle if you intend to keep him in this class is to attack from behind cover, since physical units will likely make short work of him otherwise. For skills, Azama first learns Golembane, a mediocre skill with very little potential, and should only be used in My Castle battles due to the decline of Mechanists, Stoneborns and Puppets later on in the game; however, afterwards, he learns Replicate, an extremely versatile skill even if you bring it back to other classes. Using it as a Mechanist, Azama is able to double his damage output, albeit with the threat of a tied fate looming over him while using it; if you intend to bring it back to his Monk class line, it can also double his healing abilities, allowing him to farm weapon experience and help him level up quicker, as well as healing more units.

Carefree Monk
A monk of Hoshido with a curious sense of humor. One of Hinoka's retainers登場作品：Fire Emblem Fates.

Azama is illustrated in the trading card game with the following cards:

The origin of the Japanese name Asama is uncertain, but it seems to be linked to mountains and volcanoes. As a matter of fact in Japan there are over one thousand Shinto shrines nearby Mount Fuji called "Asama shrines", where it is possible to worship the divinity of the mountain.

It is also the name of: a volcano between the Nagano and Gunma Prefectures, a Japanese cruiser used since World War I, and a type of Shinkansen train.

Artwork of Azama from the 4koma Book. 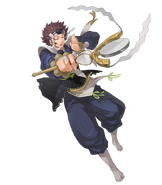 Artwork of Azama from 聖火降魔錄英雄雲集 by Okaya. 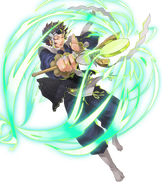 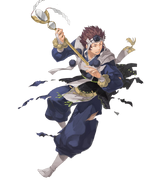 Azama as a Monk in Fire Emblem 0 (Cipher).

Azama as a Great Master in Fire Emblem 0 (Cipher).

Azama's battle model as a Monk