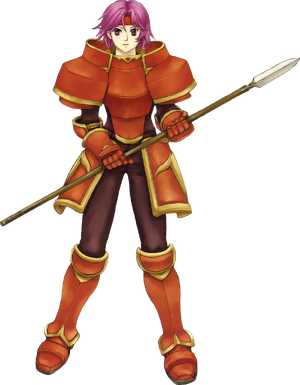 溫蒂（Gwendolyn、ウェンディ）是以下遊戲中可使用的角色：聖火降魔錄 封印之劍. She is a knight of 奧利提亞 and is the younger sister of Bors. She first appears on turn 5 of Chapter 8 of The Binding Blade, along with Ogier and Barthe, in the northwest corner of the castle. The group assists the Lycia Alliance Army in retaking Castle Ostia. She then joins 羅伊's group for the rest of his journey. It is notable she can perform a Triangle Attack with Bors and Barthe.

She makes a brief cameo appearance in chapter 18 of the Fire Emblem: Hasha no Tsurugi manga.

When a rebellion in Ostia headed by the well-respected general Leygance and a former lieutenant named Devias broke out, Gwendolyn, alongside Barthe and Ogier, were apparently absent from Castle Ostia. They returned, however, to save Lilina, who had been imprisoned and used by the revolutionaries. Upon their arrival, they met up with Roy and his army, who were engaged in a battle with Leygance to stop the rebellion. Under Roy's command, they helped to defeat Leygance, ending the revolution and saving Lilina. Afterwards, Gwendolyn, along with Barthe and Ogier, joined Roy's army on a journey to stop King 賽菲爾 of Bern from eradicating the humans of Elibe.

After the war, she continued to serve as an Ostian Armor Knight, rising through the ranks to become their first female captain.

Gwendolyn has low base stats for a unit joining in Chapter 8, and is a lance-locked, 4 move unit who joins right before the setting changes to the Western Isles, where Axe-using enemies dominate. As a result, she is extremely difficult to train, even though feeding her kills on Chapter 8X will make it much easier. Many enemies will double her and she will not do much damage or have good accuracy. However, she has good promotion bonuses and a well-balanced growth spread, so after she promotes she is a decent unit, with slightly higher Strength, Skill, and Speed than Bors, but less HP, Constitution and Defense. She is unsurprisingly much more skilful, faster, and luckier than Barthe but also has much less Strength and Defense.

Gwendolyn has a good support affinity that helps her with her offense issues, but the other units she supports can also be difficult to train. She also has a triangle attack with Bors and Barthe. This can help with her poor start, because Triangle Attacks always hit and the increased damage will help her get kills, but because Bors and Barthe also have poor movement, it can be difficult to set up.

She is rather comparable to Trec, as their stats wind up similarly, though her resistance is a little higher, and Trec has higher movement and Swords.

“You're joking right? I can't die...”
—Gwendolyn's death quote in The Binding Blade.

“You'll be fine, Gwendolyn… Just trust in yourself.”
—Gwendolyn's final battle quote in The Binding Blade. 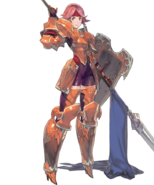 Artwork of Gwendolyn from 《聖火降魔錄英雄雲集》 by Masao Tsubasa. 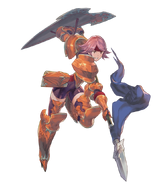 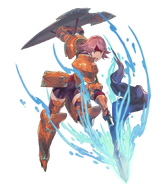 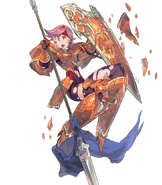