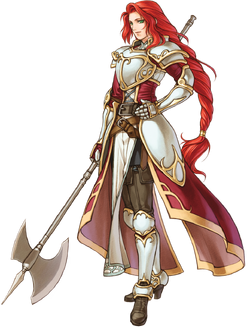 Official artwork of Titania from Path of Radiance. 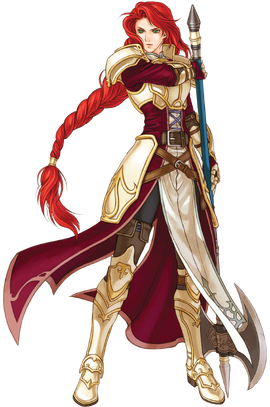 “...Yes, I’m sure of it. Ike will definitely find reasons for us to fight and live. He’ll pick the right path. I won’t have to tell him anything. All we have to do is believe in Ike and follow him...to the end.”
—Titania in a support conversation with Rhys

狄亞馬特（Titania、ティアマト） 是以下遊戲可使用角色： 聖火降魔錄 蒼炎之軌跡 and 聖火降魔錄 曉之女神. She is the deputy commander of the Greil Mercenaries who is trusted by both Greil and 艾克. She serves as an adviser of sorts to Ike and often expresses views that clash with those of his close friend and strategist, 塞涅里歐. She also dislikes talking about her past.

Titania was once a knight in service to Crimea. During her time as a knight, she entered an officer exchange program and was sent to Gallia, where she first met Greil. Although she trembled at the sight of his strength, she decided to fight him in a battle, but he swiftly beat her. When Titania asked him to train her, he agreed and they began to spar in their spare hours. After a few weeks, they became fairly close and he invited her to his home. It was at that time that she met his wife, Elena, and his children, Ike and 密絲特. Eventually, she developed unrequited feelings for Greil, but she kept it as a secret. Her one-sided love continues even after Elena's death, but she still keeps it to herself, as she knows that Greil had dearly loved his wife.

In Path of Radiance, Titania expresses immense grief and pain over Greil's death and eventually asks Ike to reveal the details about the circumstances of Greil's death (i.e. Greil's battle with the Black Knight). She also shows her strong support of Ike's succession of the Greil Mercenaries and believes that he carries the same ideals as Greil did.

Titania is very caring towards all of the members of the Greil Mercenaries and acts as a motherly and powerful figure to the younger ones. She accepts Ike wholeheartedly when he is placed in charge of the Greil Mercenaries and works hard to always support him. She is also shown to be a stern taskmaster, as seen in her C Support with Boyd in which she chastises him for slacking off of his training.

Titania becomes playable early in the game, and is a Pre-Promoted Paladin who fits the Oifey archetype. As Titania is pre-promoted, she will receive less Experience from battles in the earlier chapters, making it strongly advisable to ensure that she does not score as many kills as possible. She can, however, be used effectively in the early chapters to help the player in difficult situations, especially on the Hard and Maniac settings of the game. She also has very high Resistance, giving Titania a niche late game use in killing mages.

In the end, she has lower stats than the other Paladins (particularly in strength), but her stats are still average enough for her to be used in the later chapters.

In Radiant Dawn, Titania appears alongside the other Greil Mercenaries members, and becomes playable at the beginning of Part 3.

Despite being a pre-promoted unit once again, the Third Tier promotion system of the game makes units like herself fairly common. This essentially allows Titania to gain experience like any other unit will, making it possible for the player to train her without any repercussions. If trained, she has the potential to become a potent mounted unit, her only weaknesses being her low Defense, and her lower starting HP. Since Titania's magic stat is fairly high for a physical attacker, the 治癒 skill is notably effective on her.

Her Japanese name, Tiamat, is a goddess from Babylonian mythology, often associated with the sea and considered to be the embodiment of primordial chaos. Modern culture and video games (such as the Final Fantasy series) tend to depict Tiamat as a dragon or a hydra. 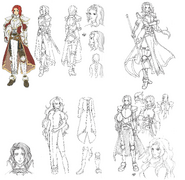 Artwork of Titania in 《聖火降魔錄英雄雲集》 by Wada Sachiko. 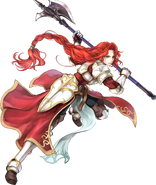 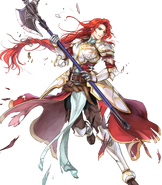 Titania as a Paladin in the One Hundred Songs of Heroes Karuta set.

Titania as an Axe Knight in Fire Emblem 0 (Cipher).

Titania as she appears in Fire Emblem 0 (Cipher).

Titania in a movie cutscene. 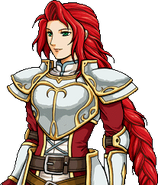 Titania's portrait from Path of Radiance.

Titania's full portrait from the Path of Radiance art book. 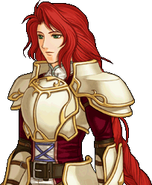 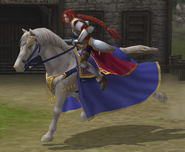 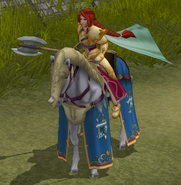