Not to be confused with the Genealogy of the Holy War character, Linda. 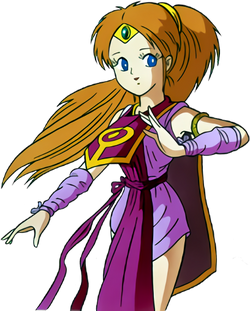 Artwork of Linde from Shadow Dragon and the Blade of Light. 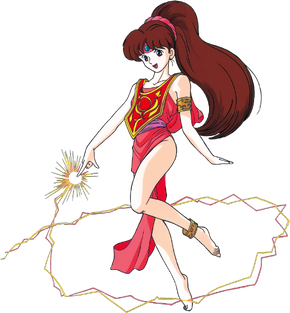 Artwork of Linde from Mystery of the Emblem.

Artwork of Linde from Shadow Dragon.

Chapter 9: The Pyrathi Dragon [joins in Chapter 11: Knorda Market] (Shadow Dragon and the Blade of Light)

“No! Let me fight. With Princess Nyna’s blessing, and the tome my father left me, I can wield Aura magic. Let me use it to avenge him. I want to destroy Gharnef myself!”
—Linde, during her recruitment scene in 聖火降魔錄 新·暗黑龍與光之劍

Linde is the daughter of Miloah, one of Gotoh's best students along with Gharnef, thus enabling her to use the powerful Aura spell. She is targeted by Gharnef's men, so she disguises herself as a boy, but in turn, she is captured and brought to a slave market. Marth frees Linde, and she decides to join him to fight and avenge her murdered father. She later moves to Pales and becomes Nyna's apprentice and most trusted individual.

When Hardin falls into madness, Nyna entrusts the Fire Emblem to Linde, who joins up with Marth's army. She later returns to Pales, and seems to have found an idol. Her ending hints that she tries to make herself more beautiful, possibly for the said idol.

Linde appears in Chapter 6 during the first trial to acquire the Opera of Light: Fire Emblem as one of four boss Mirages. She fights alongside Macellan, Dolph, and 哥頓.

In Book 2 of Mystery of the Emblem 和它的重製版Linde joins very early unlike last time in Chapter 11 of the last game (Chapter 9 of Book 1). She joins early at the beginning of Chapter 3 of Book 2, giving her a better opportunity to get trained. Linde still has low defense, but her high speed and luck compensates that fatal flaw, however, Mystery of The Emblem only has stat caps of 20 unlike its remake. It is wise to use starsphere shards to boost her growth rates in defense or have her attack from behind your other units. Even at base, Linde immediately contributes by being able to deal the most damage to the chapter 3 dracoknights due to her targeting magic defense instead of defense. With a couple levelups, her offense will even match the likes of Palla and Sirius. In Anri's way, Linde with the shaver or resire tome is the most efficient way to deal with wyverns and dragons since your other mounted units have to dismount in order to use effective weaponry. And once she promotes, she will be able to use almost every nonexclusive staff in the game thanks to her high weapon level growth. Overall, she is one of the most powerful units in book 2 along with Palla, Sirius, and Ogma.

Linde from The Complete

Linde as she appears in manga adaptation.

Linde, as she appears in the Fire Emblem Memorial book.

Artwork of Linde from 《聖火降魔錄英雄雲集》. 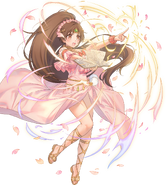 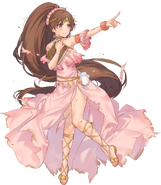 Linde as a Mage in the Cipher Trading Card Game.

Linde as a Sage in the Cipher Trading Card Game.

Linde as a Mage in the One Hundred Songs of Heroes Karuta set.

Linde's portrait in Shadow Dragon and the Blade of Light.

Linde's portrait disguised as a boy in Shadow Dragon and the Blade of Light.

Linde's portrait in Book 1 of Mystery of the Emblem.

Linde disguised as a boy in Mystery of the Emblem.

Linde's portrait in Book 2 of Mystery of the Emblem.

Linde as she appeared in Shadow Dragon.

Disguised Linde, as she appeared in Shadow Dragon.

Linde as she appeared in New Mystery of the Emblem.

Linde as she appears in Tokyo Mirage Sessions ♯FE.
在此图库中添加照片