Previously known as Lord Raymond of 康沃爾, a house destroyed by 奧利提亞 for corruption, Raven is the brother of 普莉西亞. He is recruited by Priscilla once she finds him serving as a prisoner turned mercenary on the enemy's side. Knowing that she is a member of 艾利烏德's army, Raven joins in hopes of getting closer to 海克托爾 (brother of Marquess Ostia) for revenge. He later gives up on his plans for vengeance (either due to Priscilla or Lucius' support conversations). He is accompanied by 魯塞亞, his vassal and only friend.

It is unknown if Raven participated in the War on Bern or if he even lived to the day of the war.

Due to his past with Ostia, Raven becomes distant and anti-social, coldly reminding Priscilla that he is now Raven, not Lord Raymond. Raven seems to despise everyone at first, though it is possible for him to become quite close to 蕾貝卡, 魯塞亞 and Wil through support conversations. In his conversations with Wil, he expresses dislike for Wil's new habit of referring to him as "Rave", "Senior" , and "Sir". In his conversations with Rebecca, he repairs her bowstring and she repays him by cooking him a meal. Raven's conversations with Lucius also lead to them growing very close, and he gains a more personable outlook on life, giving up on his revenge plot against Hector. He also converses with 巴多爾, who constantly challenges him to "duels of strength", which he finds bothersome and, more often than not, tries to avoid completely. Bartre also shows Raven his family tree after Raven teaches him writing. Raven tells Bartre to rewrite it, because he cannot read it.

Description: A troubled mercenary with a grudge against House Ostia.

He first appears in Chapter 16 or 17, depending on whether it is Eliwood's or Hector's mode. In Eliwood's mode, he will remain stagnant and it is vital to reach him with Priscilla before the Caelin soldiers escape and attack Raven, resulting in either his death or theirs. In Hector's mode, however, he fights alongside the remaining Laus soldiers, making him both easier (no need to rush to him with Priscilla) and harder (he could end up killing one of player's units, or be killed himself in counterattack) to recruit.

Raven has rather high bases for his level in addition to well-balanced offensive growth rates. He will almost always end up with very high HP, Strength, Skill, and Speed, making him able to take out most enemies in one round. He also benefits from bonus stats in Hard mode since he starts out as an enemy. His only glaring weaknesses are his low Resistance, and Luck and his mediocre constitution and defense, though his poor resistance is typical among melee units. His constitution is high enough to permit him to wield Swords with impunity, but blades and 斧s will significantly encumber him, sometimes preventing him from doubling his targets. A Body Ring will help him overcome his issues wielding lighter axes, though Raven is still generally fast enough to wield 鐵斧s and Hand Axes without too much trouble.

“If I die here… so be it.”
—Final Chapter: Light quote

“Yes... I was so distraught at the time... I believed the rumors without question. Without doubt. I truly did not care whether the lord of Ostia was guilty or not. I merely wanted to find a victim for the rage inside me... And you were right all along... I should have tried to understand...”
—Support Rank A with Lucius

Raven vanished without a word. Many reports have placed him in Araphen, but none could be confirmed.

"Raven" may refer to the poem by Edgar Allen Poe, about a man mourning the death of a beloved woman and haunted by a raven. In Celtic folklore, ravens are either unlucky birds signaling death, or royal portents. The name "Raymond" comes from the Germanic elements "ragin" (advice) and "mund" (hand, protection). His family's old title Cornwell corrolates to Uther's name basis to Uther Pendragon and his conceiving of Arthur with Count Cornwell's wife (see Uther for a better understanding). This is only to some degree though. 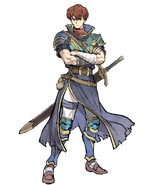 Raven as he appears in 《聖火降魔錄英雄雲集》. 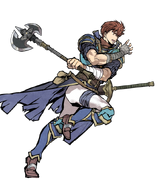 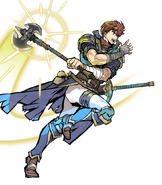 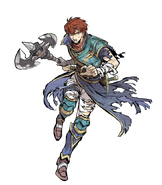 Raven's portrait in The Blazing Blade.

Still of Raven as Mercenary.

Raven as a Mercenary performing a Critical hit.

Still of Raven as Hero.

Still of Raven as an enemy.
在此图库中添加照片