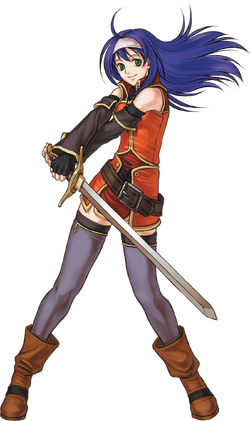 “塞涅里歐! Always lost in your books... What have I said about watching your back?”
—Mia, after she kills a Crimean rebel soldier behind Soren in Radiant Dawn.

In Path of Radiance, Mia is a mercenary hired by Crimea, and is captured by Daein soldiers. As a result of being set free by Greil, she joins his mercenary band to pay off her debt, but remained with the mercenaries. Mia's training tends to be rather extreme, with her attempts to spar with others being rather aggressive in nature, whereupon she convinces Rhys to stand by the side in order to heal any wounds she may receive. She is most likely Ike's preferred sparring partner, as she tends to not complain about the fact that he never holds back during their training sessions, even seeming to enjoy them. After the defeat of Ashera, Mia sets off on a journey around Tellius in search of new opponents, occasionally stopping by Greil's retreat to rest.

Mia can be described as being energetic and quirky. Unusually obsessed when it comes to strength, as seen in her support conversations, she will often run around and challenge the first person she sights to duels. Despite her eccentricities however, she is a genuinely nice girl, as shown during one of her training sessions with Rhys, in which she forbids him to practice with swords anymore because it was making him sick.

Through her support conversations, Mia is observed to be strongly against the traditional stereotype of women not being able to fight, training rigorously every day to prove otherwise. She is thus quick to accuse male opponents of going easy on her or assuming that her prowess as a swordswoman is inferior due to her gender as shown in her supports with Largo.

Mia fits the role of a Myrmidon and Swordmaster quite well, developing skill and speed relatively quickly while not having much in terms of HP and defense. Although her strength growth rate is not particularly low, it tends to be a bit unstable, and can leave Mia without enough power to KO enemies without the use of offensive skills, particularly Adept or Wrath. She joins with Vantage, allowing her to attack first in all fights, which suits her purely evasion-based capabilities and allows to KO weakened enemies without them dealing damage to her first.

Mia's Strength and Defense growths are well balanced in Radiant Dawn, with her high Speed and Luck making it hard for opponents to successfully land any blows on her. She is most likely to cap all her stats except Magic and Resistance, although her Defense and Strength caps may be rather disappointing. Mia also possesses excellent Bonus Experience potential, as her Skill and speed are nearly capped when she joins the player's army. While she may have issues finishing off foes without Killer weapons or the Astra skill, Mia's high Skill allows her to activate skills quite frequently, allowing her to spontaneously destroy foes.

Lady of Blades
A mercenary fighting to improve her sword skills. In life, she doesn't sweat the details登場作品：聖火降魔錄 蒼炎之軌跡

“I've been beaten? But how...”
—Mia's death quote in Path of Radiance.

“Why...can't I stop the bleeding? I haven't even met, my white-clan archrival...yet...”
—Mia's death quote in Radiant Dawn.

Mia is illustrated in the trading card game Fire Emblem Cipher with the following cards: 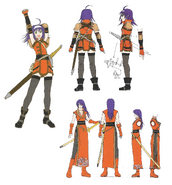 Mia as a Swordmaster in Fire Emblem 0 (Cipher).

Mia as a Swordmaster in Fire Emblem 0 (Cipher).

Mia using the Wo Dao blade to kill a Crimean rebel soldier. 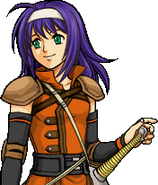 Mia's portrait in Path of Radiance. 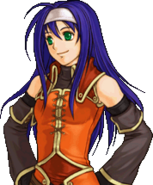 Mia's in-game battle model as a Myrmidon in Path of Radiance. 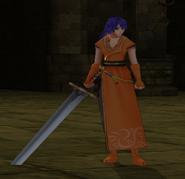 Mia's in-game battle model as a Swordmaster in Path of Radiance. 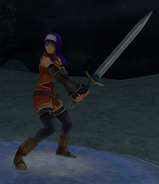 Mia's in-game battle model as a Swordmaster in Radiant Dawn.

Mia's in-game battle model as a Trueblade in Radiant Dawn. 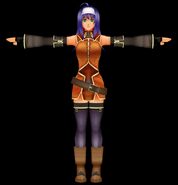 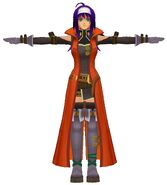