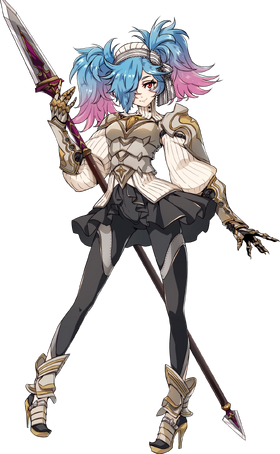 Peri as she appears in 聖火降魔錄英雄雲集.

Peri (ピエリ, Pieri in the Japanese version) is a playable character in Fire Emblem Fates and an ally on the Conquest and Revelation routes.

Peri is a daughter of a noble family in Nohr and a subordinate to Prince Xander. Her supports with Laslow reveal that prior to the events of Fates, her mother (who she was very close to) was killed by a servant who became obsessed with her. A very young Peri walked on the murder scene and suffered severe emotional trauma as a result.

Peri first appears in Chapter 12 alongside Laslow, assisting Xander in stopping the Avatar.

Peri first appears in Chapter 12 alongside Laslow, protecting the Avatar from Ryoma's attacks after he ambushes them at Palace Macrath. The two help the Avatar break through Hoshidan lines and accompany the Avatar, helping them settle the age old conflict between Hoshido and Nohr.

Peri has a peculiar personality, and, in the Japanese version, she often refers to herself in a third-person point of view (a trait associated with children, very immature people or someone who wants to look cutesy) ever since her mother died. She acts mostly like a spoiled child and has childish enthusiasm, especially in terms of causing bloodshed. She has sudden, if not sometimes random, impulses for killing people as a result of witnessing her mother's sudden murder when she was young, and often comes off as scary to other people due to her immense bloodlust toward basically anything that angers her, including her allies. This is shown in her supports with Felicia, where Peri attempts to kill her because of her clumsiness. While she enjoys killing, she enjoys a challenge and respects those that fight well, where she asks Felicia to come over to her mansion to train her servants, stating that "there's no fun if they fall apart after one hit."

Peri is shown to have some knowledge that her behavior is wrong, as shown in her supports with Jakob where it isn't fun if the killing is directed at her, and that it's a pastime that she can't give up. Her supports with Arthur also support this, as when Arthur brings her the blade she wanted, she admits that stabbing doesn't have to be the solution for everything. Silas also presumes that Xander is partial to her.

At the end of the war, Peri seems to have calmed down better, when unmarried, her ending states that her cruelty faded, and if married, states that she eventually learned the difference between right and wrong. An exception to this is if she marries Odin or Laslow, in which case she vanishes along with her husband at the same time a string of missing-persons cases comes to an end.

Peri generally performs well as a mage-killer since she has relatively high strength, speed, and resistance growths to allow her to reliably rush or kill magic users without incurring devastating counter damage. However, as she suffers from mediocre HP growth, she cannot sustain prolonged magic attacks as well as low Defense growths, making her less durable against physical weapons compared to the other Cavaliers. Nevertheless, her high movement can help her to enter range of mages, bait them closer to your allies for her or an ally to finish off. Her personal skill, Bloodthirst, grants her a 4-point boost to strength, magic, speed, and skill when she initiates a battle and defeats the enemy. This effect lasts until the start of the player's next turn. This makes Peri sync well with Azura as her singing can allow her to use her Personal skill in an offensive manner, rather than utilizing it only for counterattacks. Alternatively, if the Dark Falcon is available, she can become a potent solo unit killer as she can kill an enemy, refresh herself with Galeforce, and perform another turn of action without having to use Azura. However, her personal skill counts as a Rally effect, meaning that Rally bonuses will not stack on this skill.

Peri's second promotion option is the Great Knight class. Peri gives some of her Speed, Luck, and Resistance in exchange for higher HP, Strength, and Defense growths. Normally, the Great Knight proves to be a Physical Tank more than a balanced unit, but Peri defensive growths equalizes in this class. While she loses her specialized role, she becomes an all-around tank compared to Silas or Xander. Peri learns Luna, one of her two attacking skills in her base class set, which ignores half of the enemy's defensive stat when attacking, which is good against particularly tanky units. She also learns Armored Blow, which further boosts her Defense when attacking, which can be useful given her semi-low defense growths, even when in this class. Overall, she is a more balanced tank compared to the other Cavaliers in the game in this class.

Playful Slayer
A cavalier of Nohr who massacres foes with childlike glee. One of Xander's retainers. Appears in Fire Emblem Fates. 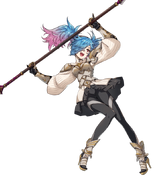 Artwork of Peri from 聖火降魔錄英雄雲集. 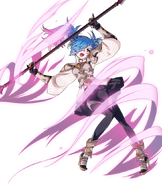 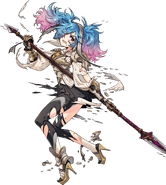 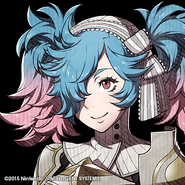