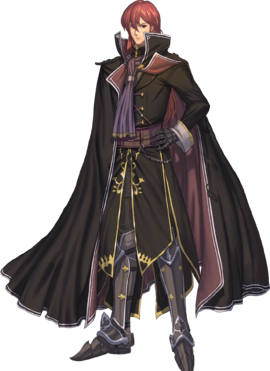 Chapter 22: A Knight-Filled Sky (Shadow Dragon and the Blade of Light)
Chapter 21: The Wyvern's Dale [Joins in Chapter 22: The Dragon's Table and Downloadable Episode 1: Wind and Thunder] (New Mystery of the Emblem)

“Don’t be a child. There are no right paths; just mine and yours, two that will never cross.”
—Michalis to Minerva in Shadow Dragon

米謝爾 murders his own father, King Osmond of Macedon, because he believes that he was a weak ruler and allowed Archanea to push them around. It is also implied that Gharnef might have played off Michalis's ambitions. He is eager to prove that Macedon is the strongest nation on the continent of Archanea and has the right to conquer every other country, thus he agreed to form an alliance with the Dolhr Empire. Noticing the possibility of conflict with Minerva, he manipulates Maria into being captured by Grust, which uses her as a hostage against her older sister. However, he feels remorse for this, despite his lack of such for killing his father. He originally plans to fight against Dolhr once Macedon becomes the most powerful nation, but he loses sight of this goal the longer that he works with them. When Matthis first meets 馬爾斯 in Shadow Dragon, he initially believes that Marth will kill him because Michalis "puts the most scared-looking soldiers on the front line for a reason" and kills those who defy him. However, Michalis is tolerant with Gotoh, who continues to warn him that he is walking on the path of destruction. He finally faces Minerva in a battle that results in him becoming badly wounded and being presumed to have died.

However, Michalis can survive in 聖火降魔錄 新·紋章之謎 by having Minerva wait one turn on the village he is in, followed by having Marth visit it. Due to his sheer will, Michalis is able to recover and join Marth's army. After the war, accounts say that he either resumed his position as King of Macedon, or later becomes the king of a country on a different continent.

As a boss on Normal mode, Michalis is considered easy for so late in the game even though his major weakness of being a Dracoknight has been annulled. His stats are lackluster for being on such a high level and having very low resistance makes him susceptible to being taken out in one blow by a magic attack. Since he has the Iote's Shield, arrows and Excalibur do not inflict bonus damage on him.

Michalis can make a decent unit at Endgame if you really need somebody to fill in for a mission. However, his base luck is very low, along with his growth rate. A Goddess Icon or two can support him well, even if he is still prone to critical hits. It is recommended to give him a Brave weapon for optimal performance.

Ambitious King
King of Macedon who had great ambitions for his country. Murdered his father. Brother to Minerva and Maria登場作品：Fire Emblem: Mystery of the Emblem.

“Rucke, a coward like you would never dare to do something this big. Did Hardin fool you with his fancy words? ... What, you thought I was dead? Haha...Never mind. Give Minerva back to me. I don't care about this country anymore, you can do what you want with it. However, I won't rest until I have dealt with 'that guy' personally.”
—Michalis in Chapter 3 of Mystery of the Emblem

“Made it this far, have you? Don’t gloat yet. My Dragoons and I still rule these skies!”
—Michalis's battle quote

Accounts are conflicted about Michalis after the war. Some said he ruled over Macedon once again, while others claimed he departed to conquer another continent.

Michalis in The Complete.

Artwork of Michalis from the TCG. 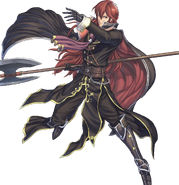 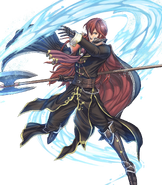 An illustration of Michalis (along with 米奈娃 and 瑪麗亞) that appears in the Fire Emblem Memorial Book Archanea Chronicle.

Michalis as he appears in the manga along with his two sisters, 米奈娃 and 瑪麗亞.

Michalis as a Dracoknight in Fire Emblem 0 (Cipher).

Michalis as a Dracoknight in the One Hundred Songs of Heroes Karuta set.

Maria heals Michalis, as seen in the ending of Mystery of the Emblem.

Michalis, as he appears in Shadow Dragon and the Blade of Light

Michalis, as he appears in Mystery of the Emblem

Michalis, as he appears in Shadow Dragon.

Michalis, as he appears in New Mystery of the Emblem.