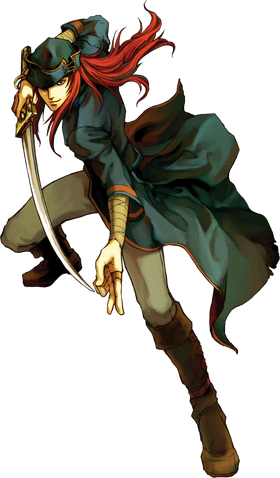 “Oh, yeah... See, you can have all the skill in the world and still have a bad day. It doesn't take much for the most fortunate man around to have a fall. A royal family at the height of their power gets betrayed, and that's the end. It's life really, innit?”
—Joshua talking to Gerik in a support conversation

He also appears as a sticker in Super Smash Bros. Brawl.

Joshua is met by 艾莉可 and her group in Serafew where he is working as a mercenary on a job to kill Natasha. Natasha approaches Joshua to tell him about the emperor's strange changes; however, he seems to be uninterested with her words. Sometime after this, he went into the local arena, but lost most of his gold. Upon being spoken to by Natasha again, he has a bet with her, and ultimately joins Eirika's group, most likely due to cheating towards her favour.

In Eirika's route, he is revealed to be the Prince of Jehanna, who disappeared about ten years prior to the beginning of the story, abandoning both his mother, Ismaire, and his title so he could better learn about his people's needs and become worthy of the crown in his own eyes. During this time he worked with Caellach in a mercenary troop, and appears to have earned a penchant for stirring up trouble off the job, but Caellach appreciated him anyway.

During Chapter 15, Joshua can, at the player's discretion, be made to fight Caellach. When the battle begins, Joshua and Caellach will reminisce on their time as mercenaries together. In Eirika's route Joshua then bluntly asks if Caellach killed his mother. Caellach confirms this, and says things like that happen in war and that grudges get in the way of work. Joshua sarcastically agrees and proclaims he is going to kill Caellach and that he should not hold it against him, which angers Caellach. In 艾夫拉姆's route, on the other hand, more detail is put into their time as mercenaries and Caellach's ambitions, where it is revealed that Caellach would always pick fights with Joshua, but still respected him. Caellach then attempts to goad Joshua over to his side, which he refuses. They then go to battle due to their opposing sides but seem to hold no ill will towards each other, unlike in Eirika's route.

Joshua is a very roguish, casual, and carefree person. He's also very cunning, enough so that he can cheat without getting noticed, although Gerik and Artur catch on. He believes in luck more than ability, and is carefree about his job, as shown in Serafew when he is sent to kill Natasha, he'd rather head back to the Arena. He's also slightly flirtatious to girls, especially Natasha; he is also noted to have feelings for her, which is hinted in his first word to think of her as 'beautiful' and his B Support when he bets she will fall for him, a bet she admits he won later on.

Despite his jovial and carefree attitude, Joshua is very loyal, genuinely kind, caring, calm, and composed in the battlefield, as portrayed in his conversation with his mother that he felt deep guilt over leaving her. He shows the most kindness to girls, not only to Natasha but also to Marisa and L'Arachel. Joshua also seems to be fairly honest, as seen in a support conversation with 西尼亞斯 where he cheats Innes out of tons of gold. The Frelian prince refuses to give up, despite having lost so much money. He later admits to him that he cheated and offers to return the gold, though Innes allows him to keep it and continues to bet with him. In his supports with L'Arachel, he loses his bets and attempts to rig the game towards his favour, but continually fails.

*30% in the Japanese version

Like most myrmidons, Joshua focuses mostly on his very high Speed and Skill stats. His base stats in these are incredible for his join time, and his above average growths in them compound this further. He is sufficiently able to double nearly every enemy encountered in game with ease, and his use of accurate swords and his high skill give him a very low chance of missing any of his attacks. On promotion, he can choose to become either a Swordmaster or an Assassin, the first of which increases his critical chance by a hefty 15 percent, while the latter grants him Silencer and the ability to use lockpicks. However, as the player is expected to have Rennac do most of the lockpicking, along with his good growths, it's better off to promote Joshua into a Swordmaster to compliment his high critical rate.

Joshua's main weaknesses come from his swordlock, and his average Strength and durability. Because he is locked to the use of swords, he has no ranged option apart from the Runesword (requiring an A Rank in order to use) and the Wind Sword (which obtained rarely from the Cyclops boss at the end of the Tower of Valni, barring Ismaire in Creature Campaign). His average strength also makes it slightly hard to damage high defense units. Like Marisa, he's extremely vulnerable to Swordslayer using enemies, which can deal massive damage towards him.

Tempest King
A mercenary who loves to gamble. He has an evasive, almost aggravating personality登場作品：Fire Emblem: The Sacred Stones.

Natasha: You... You're that man I met... Are you here to capture me? You've been hired to silence me, haven't you...
Joshua: Yeah, Grado's paying the bill. They want you dead, you know? But don't feel bad. It's not personal.
Natasha: Wait, please... It doesn't matter what happens to me, but you must hear my words. The emperor of Grado is changed. He is not the man he once was. The other nations must be warned before he extinguishes all light from our lands.
Joshua: Hey, no offense, but I'm just a mercenary. I don't care about Grado or its emperor. Everything you say may be true, or it may be lies. I don't care either way.
Natasha: But that's...
Joshua: Even so... Killing a beautiful lady like you would leave a bad taste in my mouth. Tell me, do you like to gamble?
Natasha: What?!
Joshua: Gambling's what I live for. Even when I lose, I never want to stop. Let's have us a little wager. If you win, I'll believe you. Heads or tails, you call it.
Natasha: You can't... This is no time for games...
Joshua: Would you rather I get on with the job I was hired for?
Natasha: ..... Um, heads... No! Tails!
Joshua: All right. So I'm heads, and you're tails. Here we go. ... ... ...
Natasha: ....... Which... Which is it?
Joshua: What do you know?! It's tails. You win. Figures. I haven't won anything all day. Well, Lady Luck has spoken. Guess I'm on your side now.
Natasha: Are you serious?
Joshua: Yeah. Sure, I might cheat, but I never worm out of a bet. It's a rule of mine.
Natasha: Oh, thank you heaven! Thank you, blessed light, for your protection!
Joshua: I got nothing against heaven, but I'm right here if you want someone to thank... No? Well, get behind me then. I've got to take care of these fools.

Carlyle: You...could it be?
Joshua: Carlyle. How did this happen? You taught me how to wield a blade. You of all people...
Carlyle: You've returned. But now...It's too late. It's far too late.

Joshua: Caellach.
Caellach: Hey! If it isn't Joshua. It's been a long time. Have you been well?
Joshua: I've been all right. Still working as a mercenary. When did you get all proper and join the Grado army?
Caellach: Didn't I tell you? I wasn't about to waste my life as a nameless soldier. Still, I think back on those days a lot lately... My axe and your sword... The two of us were a deadly pair, eh?
Joshua: ......
Caellach: By the way... I know all about you, Joshua. Who you really are I mean. The prince of Jehanna, huh? When did you plan on sharing the wealth, you sneaky dog?
Joshua: Listen, you can't reduce a nation to loot waiting to be divided. And more importantly, I made a vow to my mother. I'm going to succeed her as ruler of my homeland. Hey Caellach... You're the one who killed my mother, aren't you?
Caellach: Yeah... Sorry 'bout that. Things happen, you know? C'mon Joshua, don't hate me. This is war. There's nothing you can do about it. Besides, grudges get in the way of work, right?
Joshua: That's true. It's as you say. Listen Caellach... I've got to kill you now. Don't hold it against me.
Caellach: You arrogant... You haven't changed a bit! I've always wanted to show you who's better, Joshua. And I'm even stronger that I used to be. I'm gonna wipe that smug look off your face for good!

Joshua: It's been a long time, Caellach.
Caellach: Is that really you, Joshua? How long's it been?
Joshua: About two years... What've you been doing? You know, that innkeeper's still mad you stiffed him.
Caellach: Oh please... You telling me that old dog's still alive? ...How's the rest of the troop doing?
Joshua: They're getting by. Some of them ended up feeding the crows, though...
Caellach: Is that so? Those were good times, weren't they, Joshua? We were terrors on the battlefield and worse of it.
Joshua: Yeah we were. You'd get carried away and pick fights with me... You always said the same thing: "I will be King!"
Caellach: Yeah, that's my dream. And I'll do anything to make it true. What do you say, Joshua? Let's team up again? Leave those losers you're with and work for me.
Joshua: Sorry, can't do it. I'm not going to let you use me for anything.
Caellach: Bah... You're a cold fish, aren't you. That's one thing that hasn't changed about you.
Joshua: You haven't changed much either. You're still shameless as ever.
Caellach: Ha ha! That's the truth. Well... You want to get started?
Joshua: Mm. Sure.
Caellach: I'm stronger than I used to be. No offence, but you're not in my league anymore. Don't hate me, Joshua.
Joshua: Same to you.

Joshua returned to Jehanna and ruled over it as king. His skills as a leader had grown great, and Jehanna flourished as never before. He never outgrew his love of travel and games of chance.

When Joshua returned to Jehanna, he took Natasha as his bride and claimed the throne as its rightful heir. Natasha was the perfect companion, and together, they carried the mighty desert nation to great glory.

Joshua returned to Jehanna with Marisa, where she pledged service to the crown and became the top swordfighter in the land. Joshua still loved games of chance, but when it came to Marisa, she was ever the winner.

After the war, Joshua challenged Gerik to a duel in hopes of pressing him to move to Jehanna. The match ended in a tie, but Gerik was impressed by Joshua's swagger. From that day forward, Gerik never left Joshua's side.

Joshua is a Hebrew name meaning "Yahweh is salvation". After the death of Moses, Joshua became leader of the Israelites and led them to the Promised Land. A member of the tribe of 艾夫拉姆, he is most famous for bringing down the city of Jericho. A book in the Bible named for him details his time as the Israelites' leader.

The Greek form of Joshua is "Jesus". 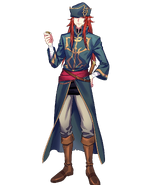 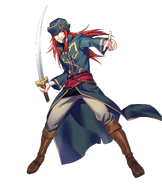 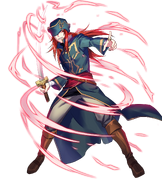 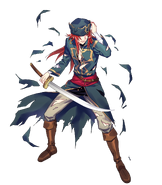 Joshua as a Swordmaster in Fire Emblem 0 (Cipher)

Joshua as an enemy Myrmidon

Joshua as a Myrmidon

Joshua performing a critical hit as a Swordmaster