398年, after Zofia rejected Rigel's request for assistance following a famine and drought, both nations entered all-out war. For over a year, the inexperienced Zofian army was repeatedly defeated by the overwhelming Rigelian forces and Rigel steadily crept into Zofian territory. Desaix managed to contact the upper echelon of the Rigelian Army and negotiated a cease-fire in exchange for a large compensatory sum of gold. The Rigelian Army remained garrisoned in Northern Zofia and tensions continued to grow. A year after, Desaix triggered a coup d'etat and the Zofian royal family including Lima IV were killed, with the missing Anteze as the only survivor. The Deliverance was established soon after by the Zofian nobility in opposition to Desaix, with Clive as its leader.

The Deliverance would be pushed back into a corner by Desaix and the Rigel forces, but would rally behind the new leader Alm and route the Rigel army. They would go on to slay Desaix in his own lands and push onward into Rigel itself. Following the resulting war with Rigel, Alm would wed Celica, the missing Anteze, and unite the two kingdoms into the Kingdom of Valentia which worshipped both Mila and Duma.

Zofia is the Polish variant of the name Sophia, which means "wisdom" in Greek. 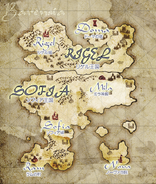