Eliwood's artwork from The Binding Blade. 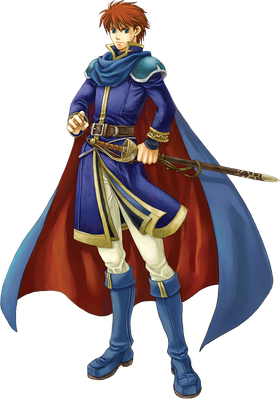 Eliwood's artwork from The Blazing Blade.

“I know that I've caused much pain for my friends. But that is why... I will not lose here today!!”
—Eliwood vs Nergal

Eliwood was born of the noble house of Pherae; his father was Lord Elbert and his mother was Lady Eleanora. His childhood best friend was 海克托爾, the younger brother of Uther, the Marquess 奧利提亞. These two attended school together and, as they grew older, their friendship grew as well. He is expected to be around the age of 16 when Lyn first meets him in chapter 7 and a year older in chapter 11 (Eliwood's story) or chapter 12 (Hector's story) due to his support conversation with Hector, which states they have been sparring since the age of 12 once every two months, with a total of 30 or so battles. If so, then he would be 17 in his story.

By chance, one day, when Eliwood was scheduled to meet with Hector, he stumbled upon a group of bandits who had captured a young girl named Ninian. After he set about rescuing the girl, he met Lyndis and decided to see if he could help her in her quest to free Caelin from Lord Lundgren. Eliwood convinced Caelin's neighbors to remain neutral in Lyn's dispute.

Eliwood is a noble on a quest to find his father, who had been kidnapped by the Dark Druid, Nergal. His objectives soon change, however, and Eliwood fights a group of assassins called the Black Fang. As the story progresses, Eliwood comes to battle with Nergal's morphs (artificial humans, some of who are sentient), Nergal himself, and a renegade Fire Dragon to save the world. To defeat Nergal, he journeys deep within the earth to retrieve Durandal, a legendary sword and the eponymous The Blazing Blade or "Blazing Sword," which was used by Roland, the founder of Lycia.

Depending on his supports, he can wed 尼尼安, 琳, or Fiora, and becomes the father of 羅伊.

At the start of the game, he is beset by illness, so he decides to stay at Castle Pherae to not burden Roy. He then sends his son to 奧利提亞 and hires Dieck's mercenaries to help him. However, he and Hector can be used as playable characters in the link arena and the battle maps after the game is beaten. He comes as a Paladin.

Knight of Lycia
A sincere noble of Pherae. His friends Lyn and Hector serve him loyally登場作品：Fire Emblem: The Blazing Blade.

While Lyn possesses high Speed, Skill, and Luck, and Hector possesses high HP, Strength, and Defense, Eliwood has no stat in which he truly excels, although it should be noted that he possesses an unusually high Resistance growth for any physical unit short of a Falcoknight, outstripping both of his peers in Resistance. In addition, his high HP growth and average Defense together means that Eliwood is not a unit that will die easily.

Although slow in comparison with Lyn, Eliwood's decent Speed and Luck growths, combined with his base of 7 for both, grant him good avoid and doubling capacities, though he may have trouble doubling enemies early on. His Skill will rarely be a problem, but his Strength starts off rather low, and this, combined with his lack of early ability to double, may result in the player having to feed him kills occasionally. Fortunately, however, his Rapier goes a long way towards fixing this offensive problem while, allowing him to kill enemies and even bosses without too much difficulty.

Once Eliwood gets past his initial difficulty with scoring kills, he will quickly mature into a strong and efficient fighter, dealing moderate to high damage and doubling reliably, and his good Avoid means that he will rarely be hit. In addition, he possesses the Anima Affinity, widely considered to be one of the best Affinities, and his supports with Hector and Lowen (and to a lesser extent, Lyn) will boost his fighting capabilities considerably. He does possess other supports as well; however, they are generally considered less effective than the ones already mentioned.

Despite Eliwood's high combat potential, in his story, his extremely late promotion will render his good growths near meaningless, although if he's had good Level Ups, he can still perform fairly well against some of the late-game bosses. In Hector's story, on the other hand, he can promote as early as Chapter 24, which will give him a good chance to get to Level 15 or so promoted, at which point his Strength and Speed will both be enough to ORKO almost all generic enemies aside from Generals and Wyvern Lords, the former of which he can use his Rapier against; in addition, his promotion will give him very high Aid and Movement, making him a good candidate for rescuing Hector in order to get to the Gate/Throne more quickly.

All things considered, Eliwood is a solid unit with good utility both early-game and late-game, thanks to his Rapier and horse respectively, and he has plenty of opportunities to gain Experience thanks to being a Lord. In other words, Eliwood is by no means a liability and should prove to be quite helpful over the course of the game.

Eliwood - Knight of Lycia
Eliwood succeeded his father as the marquess of Pherae. His sincerity and his clear guidance made him his father's equal in all eyes.

Eliwood and 尼尼安
Eliwood and Ninian were wed after the conflict. Ninian gave up her old life and her people to enjoy a brief life with Eliwood. They have a son named 羅伊, who will one day take up arms to defend his nation.

Eliwood and 琳
The marquess of Pherae and the princess of Caelin were wed after the conflict. All of Lycia was in an uproar, but none could sunder their bond of love. They have a son named 羅伊, who will become a great hero.

Eliwood and Fiora
Eliwood and Fiora were wed after the conflict. A group of Lycian nobles protested that she was a mercenary, but none could sunder their bond of love. They have a son named 羅伊 who will become a great hero.

He plays a minor role in the Hasha no Tsurugi manga during the Kruzard arc, which occurs between chapters 9 - 13. During this arc, he is attempting to help reform the Lycia Alliance amidst a rebellion lead by Kruzard. He then later works with 瑟西莉亞 in sending Al's group to the Western Isles to investigate the Etruian governments' corruption on the Isles.

Eliwood is illustrated in the trading card game Fire Emblem Cipher with the following cards:

Eliwood appears as an obtainable character. His class is Knight of Lycia.

Eliwood's name possibly comes from the Germanic name elements "elf" and 'wood,' meaning 'wood of elves,' which might be a reference to Avalon, the legendary island where King Arthur supposedly went to be healed after his last battle. Alternatively, the name 'Elwood' means 'elder tree forest' in Old English.

Eliwood's appearance in Hasha no Tsurugi. 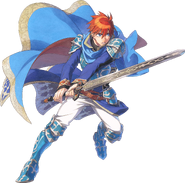 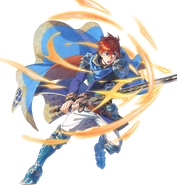 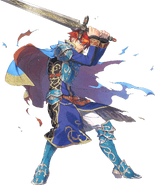 Artwork of Eliwood from Fire Emblem 0 (Cipher) by Koutarou Yamada.

Eliwood as a Lord in Fire Emblem 0 (Cipher).

Eliwood as a Lord in Fire Emblem 0 (Cipher).

Eliwood as a Lord in the One Hundred Songs of Heroes Karuta set.

Eliwood's ending CG if he has an A Support with Ninian.

Eliwood's ending CG if he has an A Support with Fiora.

Eliwood's ending CG if he has an A Support with Lyn.

Eliwood speaking to the Tactician in the ending of The Blazing Blade.

Eliwood's portrait in The Blazing Blade.

Eliwood's alternate portrait as he talking to the Tactician.

Eliwood at the end of The Blazing Blade.

Eliwood's portrait in The Binding Blade.

Eliwood as a Paladin attacking with a Sword

Eliwood as a Paladin attacking with a Lance

Eliwood as a Paladin attacking with an Axe

Eliwood as a Paladin performing a Critical Hit

Eliwood's battle sprite in The Blazing Blade as a Lord.

Eliwood performing a critical hit in The Blazing Blade as a Lord.

Eliwood's battle sprite in The Blazing Blade as a Knight Lord wielding the Durandal.

Eliwood performing a critical hit in The Blazing Blade as a Knight Lord with the Durandal.

Eliwood's battle sprite in The Blazing Blade as a Knight Lord with a lance.

Eliwood as a Knight Lord holding a normal sword.