Chapter 1: Dawn of Destiny (joins in Chapter 8: The Reunion, The Binding Blade)
Epilogue (The Blazing Blade)
Xenologue 1: Champions of Yore 1

“Right now, I don't know anything about running a country, but I'll learn. I shall make Ostia a country in which our children can always be happy.”
—Lilina in a support conversation with Ogier in The Binding Blade

Lilina's deceased mother is never mentioned in name during The Binding Blade. She is deliberately left ambiguous, as 海克托爾 has four potential wives (芙羅利娜, 琳, Farina, or an unknown woman) depending on which supports he gained in The Blazing Blade or if he had any supports at all.

At the end of The Blazing Blade, if playing 海克托爾's route, Hector asks the Tactician he met during his story to name his first born child. That child, Lilina, appears briefly at the end of 聖火降魔錄 烈火之劍 in an epilogue that takes place fifteen years after the events of the game. During Eliwood's visit to Castle Ostia, Lilina meets him for the first time as well as his son 羅伊, who was accompanying him. Though a little shy at first, the two quickly run off to play as their fathers discuss the unrest occurring in Bern by 賽菲爾.

Years later, she and Roy studied in 奧利提亞 under the tutelage of the Mage General 瑟西莉亞. Lilina was very good in magic while Roy was not, so Cecilia trained Roy as a swordsman and Lilina as a mage. In this time too, Lilina seemed more mature than Roy (mentioned in a support conversation).

In The Binding Blade, Roy was studying in Ostia when he is called home by his sickly father 艾利烏德. When Roy gets to Pherae, he finds that his home was being attacked by bandits. He manages to stop the bandits, rescuing his father and Lilina, who was visiting Pherae.

Lilina is very kindhearted, outgoing, compassionate, and charismatic, not judging people for their skills, origins, or looks. On the other hand, she is also childish, stubborn, and naive to the point of being slightly detached from reality (mentioned in some supports, like those with Garret and Ogier). Lilina herself is quite aware of her flaws, though, and she works very hard to become a good leader like her deceased father, 海克托爾.

美麗的盟主
A noble of Ostia with a natural gift for magic. Roy's friend since childhood登場作品：Fire Emblem: The Binding Blade.

Lilina is one of the most potent magic users in 聖火降魔錄 封印之劍. She has off-balanced growths, with a focus in Magic, Resistance, and Luck. It does not take long for her to max out her Magic stat, and being a female Sage means she has a higher cap than any other character's Magic stat (30), leading her to have higher damage output per hit than almost all other characters. With a maxed Magic stat, she makes for an excellent healer. Her support with Roy is the fastest-building in the game, but some of her other supports, such as Ogier, Bors and Gonzales, are handy as well.

It should be noted, though, that her defensive and offense-supportive stats are rather low. Her Defense is very low (but typical of mages), though a support with Gonzales will give her a slight boost to her defense, and her accuracy is subpar due to low Skill, although this is mitigated by her high Luck and the inherent high accuracy of Anima tomes. In addition, her low Speed growth will give her some trouble doubling units as the game goes on, particularly on hard mode; this makes her capabilities a bit lower than Lugh, who has higher speed and skill growths.

She joins at Level 1, at a time when many units should be around Level 10+. Lilina may not be on par with Lugh level-wise by then. She also takes time to train, as the difficulty is past level 1 at this point. Still, training her can be well worth the effort.

Both Lugh and Hugh can be more reliable than Lilina in many situations, Lugh having high skill and speed growths and Hugh having uncharacteristically high defensive stats for a mage/sage. However, if your group has trouble dealing with high defense/resistance & low speed bosses, Lilina will augment your lineup nicely.

“Father... Watch over us...”
—Lilina's final battle quote in The Binding Blade.

Lilina is a combination of the name "Lily" and the suffix "-ina" which mean "Little", and could be translated as "Little Lily". The "ina" suffix is also subtle connection to two of her potential mothers, it is a part of Florina's, and her second older sister Farina's names. Florina connection is even stronger as her name means "Little Flower". 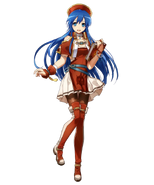 Lilina as she appears in 《聖火降魔錄英雄雲集》. 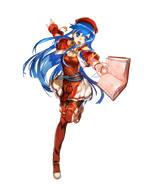 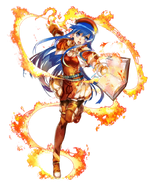 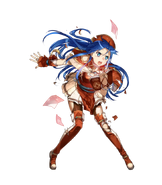 Lilina as a Sage by Kotaro Yamada.

Lilina as a Mage by Mayo.

Lilina as a Sage in the One Hundred Songs of Heroes Karuta set.

Lilina and 羅伊 in the ending of The Blazing Blade.

Lilina's appearance in Hasha no Tsurugi.

Lilina's portrait in The Binding Blade.

Lilina's portrait in The Blazing Blade.

Lilina's battle sprite in The Binding Blade as a Mage.

Lilina's battle sprite in The Binding Blade as a Sage.

Lilina performing a critical hit as a Sage in The Binding Blade.
在此图库中添加照片