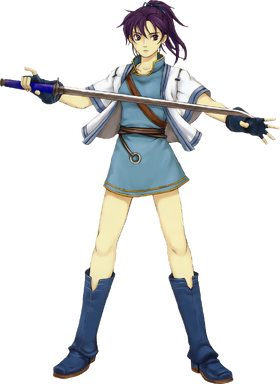 Chapter 7: The Rebellion of Ostia (joins in Chapter 9: The Misty Isles)

“I've also been training my sword skills, and I've won at many arenas around the continent. You don't have to go easy on me!”
—Fir to Rutger in a support conversation

菲爾（Fir、フィル Firu) 是以下遊戲可使用角色： 聖火降魔錄 封印之劍. She is the daughter of 巴多爾 and Karla, making her the niece of 卡列爾. She travels around Elibe in an attempt to hone her skills and is aquainted with Noah. She trains with him in the Arena during the rebellion initiated by Leygance in 奧利提亞. She is quite headstrong, and exudes the same calmness and single-mindedness of purpose as her mother. In Chapter 9, she carries a Wo Dao, an extremely rare sword that Scott seeks to grab.

She can be recruited only by speaking to her with Noah. She makes a brief cameo appearance in Chapter 17 of the Hasha no Tsurugi manga.

Fir works to follow in the footsteps of her late mother and struggles to improve her skills in swordsmanship until she achieves the title of Swordmaster. As the rebellion against 莉莉娜 and 海克托爾 occurs in 奧利提亞, she is oblivious to the turmoil while she trains with Noah in an arena. It is not until Chapter 9 that she joins 羅伊's party, later learning through support conversations that Noah has been in love with her since he first saw her.

Fir is one of the two Myrmidons who join, the other one being Rutger. Fir joins at Level 1, at a time when most of your characters will be Level 11+ and she is a fairly difficult character to train. One way to train her is to give her an 鐵劍 or two and have her wait in the forest in the middle of the map after recruiting her. The immense amount of Pirates in the chapter will all attack her with low to no chance (below 10%) of hitting her and give easy experience. In this way, she can level up as high as between Level 10 and 15. In contrast to Rutger, Fir puts more emphasis on Luck and Speed, and falls short in Strength and Defense (though they can be compensated with a good support, most commonly Noah.) As such, she usually ends up dodging more attacks than Rutger, but will have lower Strength and perform Critical hits less often. She can become a powerful ally once trained, and can be used if Rutger has not been trained, or if you prefer Fir's higher Luck rating.

Sword Student
A woman who travels in search of the best swordplay opponents anywhere登場作品：聖火降魔錄 封印之劍.

Fir is illustrated in the trading card game Fire Emblem Cipher with the following cards:

Fir's appearance in Hasha no Tsurugi. 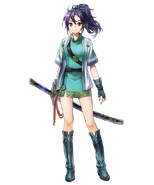 Artwork of Fir from 《聖火降魔錄英雄雲集》 by kaya8. 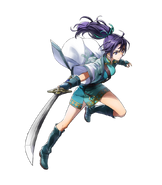 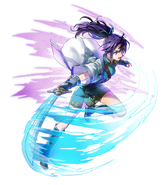 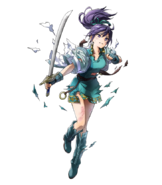 Artwork of Fir from Fire Emblem 0 (Cipher) by Douji Shiki.

Fir as a Myrmidon in Fire Emblem 0 (Cipher).

Fir as a Myrmidon in Fire Emblem 0 (Cipher).

Fir as a Swordmaster in Fire Emblem 0 (Cipher).

Fir's portrait in The Binding Blade.

Fir's battle sprite in The Binding Blade as a Swordmaster.

Fir performing a critical hit in The Binding Blade as a Swordmaster.

Fir as a Myrmidon.

Fir as an enemy.
在此图库中添加照片