“My homeland was destroyed by King Surtr of Múspell. But not only that... I watched as he killed my mother. I can't let the same thing happen to your kingdom. Please, whatever strength I have...let me lend it to you.”

Shortly before the events of Book II, the Fire Kingdom 穆斯貝爾 waged war on Nifl with its king, 斯爾特 killing the queen, her mother, in front of Fjorm. Swearing vengeance on Surtr, she attempts to fight against him. However, she was easily defeated by him and rather than kill her, he opted to leave her where she was. Falling unconscious on the wayside, 洛基 was about to finish her off, only to be repelled, leading for her to be found and rescued by the 特務機關.

As she awoke, she is informed by 夏蓉 that the 召喚者 had found her and nursed her back to health. As thanks, she joins the Order of Heroes and asks for their strength to take back her kingdom and take revenge against Múspell.

Described by Gunnthrá as being gentle, but prone to agonizing over things. Fjorm comes across as stubborn and devout of traditional beliefs, as she exhibits a drive to repay a debt to the Summoner for saving her, due to her homeland's tradition that, if a person saves someone else from the snow, they owe the savior a debt or favor.

冰之公主
The gentle second princess of Nifl, the Kingdom of Ice. Seeks revenge against 斯爾特

In Norse Mythology, Fjorm is the name of one of the eleven rivers of Élivágar, the ice rivers that flow in the Ginnungagap. 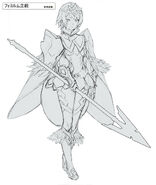 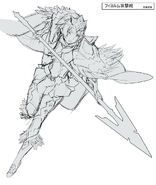 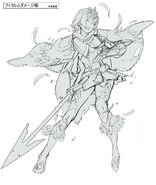 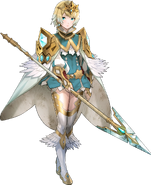 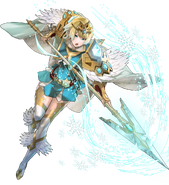 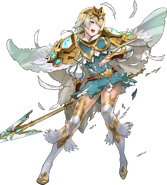 A full body shot of Fjorm with 雷依普特 during the Book II cinematic.