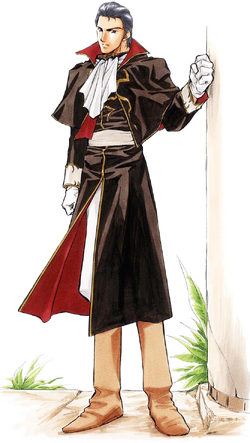 Official artwork of Reinhardt from Thracia 776.

“I see you’ve made your resolve. Bishop Saias was right, you really have grown up. Very well, then... Suit yourself.”
—Reinhardt to Olwen, when they meet on the battlefield

Reinhardt (ラインハルト Rainharuto) is an enemy character from Fire Emblem: Thracia 776. Said to be the second coming of the Crusader Thrud, he is the leader of the Gelben Ritter in the Friege army and has been Ishtar's personal guardian since childhood. He is also the older brother of 歐爾玟, who initially admires him. Kempf despises him out of envy and views him as a rival.

In terms of one-on-one combat, Reinhardt is probably the strongest boss in the game. He has four powerful skills, a Dire Thunder tome, a Master Sword, five leadership stars, five movement stars, a PC of 2 (an utter rarity among bosses), and high stats to boot. If you have been using 歐爾玟 with the Vantage + Dire Thunder combo, Reinhardt has that too, but he is stronger than her thanks to his skills.

Thunder's Fist
Formidable and admired mage knight in Friege's army. Ever ready to lend an ear to his younger sister, Olwen登場作品：Fire Emblem: Thracia 776.

“...Farewell...”
—Reinhardt's quote after being released 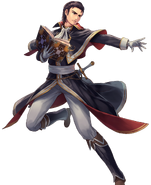 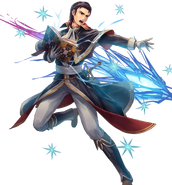 Reinhardt as he appears in the TCG