“This is the way I prefer to remember it, milord. Please don't ruin it by correcting me!”
—Rebecca talking to Lowen in a support conversation

蕾貝卡（Rebecca、レベッカ） 是以下遊戲中可使用的角色：聖火降魔錄 烈火之劍. She is the 15 year old daughter of a village magistrate in Pherae and childhood friend of Wil. She is a sweet young girl in search of her long lost brother. Rebecca is of the Archer class.

In Rebecca's conversations with Sain, she expresses a thick skepticism and disdain for his supposed feelings for her. In the last conversation, she threatens to tell 琳 about herself and Sain, causing him to go silent and for her to call him a pig.

Rebecca is unseen 20 years later, though she was mentioned to be 羅伊's wet nurse.

When looking at Rebecca, the first thing that is commonly done is comparing and contrasting her to fellow archer Wil. While Wil focuses on power and durability, Rebecca focuses on evasion. In addition, while Wil is easier to train due to his availability in Lyn's story, and also has more stable growths, Rebecca has her advantages. Once she starts gaining levels, Rebecca will start doubling everything in sight with her high speed. Her speed can also grow to be much higher than Wil's, giving her more chances for double attacks. However, Wil has more constitution, allowing him to wield heavier bows without losing as much attack speed as Rebecca, and more strength, allowing him to inflict more damage. He also has higher HP, making him more durable, especially early on, though his speed growth may not allow him to reliably double opponents.

However, both of them have a good spectrum of support options, especially with the Pirate Dart, or between each other. Such support options focus boosting strength and critical rates, which allows further damage to be dealt to the opponent.

Wildflower
A girl who lives in a remote village and spends her time hunting. Kind and sociable登場作品：Fire Emblem: The Blazing Blade.

“I'll do whatever I can to help!”
—Final Chapter quote

“Um, Mark? Can I ask you something? Do you think Dart and I... have something in common? What? Not at all? Hmmm... I don't know there's something about him.”
—Chapter 19: The Dread Isle quote

“Forgive me... Brother...”
—Death Quote during or after Chapter 16x

Artwork of Rebecca in 《聖火降魔錄英雄雲集》. 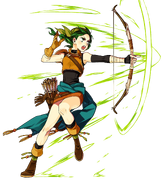 Rebecca as an Archer in Fire Emblem 0 (Cipher).

Rebecca's portrait in The Blazing Blade

Rebecca as an Archer

Rebecca as a Sniper 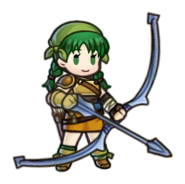