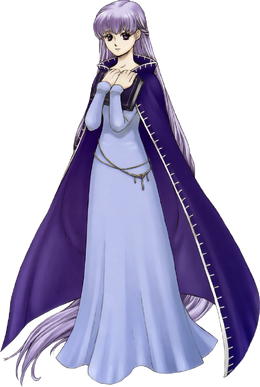 “Yes... I am half Dragon...so I grow slowly...”
—Sophia talking to 法 in a support conversation

Sophia was captured by Bern forces and sent to the same prison cell as 瑟西莉亞, where she treated the general's wounds using her powers. Aside from that, she can see the future, though not clearly. She then leads the Alliance army to Arcadia, in order to help the people there shake off Bern's invasion.

Though she has little background, in support conversations she speaks slowly, demonstrating her shyness. It is noted that she is very old, about one century of age. Sophia cannot transform into a dragon, even though she is half-human half-dragon, as she does not seem to possess a 赤龍.

She can form a close friendship with 雷伊 and can marry 羅伊 if they have A-support in the end.

Sophia makes a brief cameo in 聖火降魔錄 烈火之劍, where she is looking for Athos and can have conversations with different members of 艾利烏德's army if the player visits the ruin village at the bottom right of the map. She also apparently knows 霍克艾, accidentally mistaking him for the Archsage like everyone else when he send Hawkeye to the ruins. Hawkeye asks her to tell his daughter that he will be home and she says she will.

Nabata Prophet
A shaman of Nabata who has lived a sheltered life away from other people. Sees the future登場作品：Fire Emblem: The Binding Blade.

Initially, once one sees Sophia's growths, which present notable advantages over Raigh's such as better Magic and Resistance, they may be inclined to believe that she has high potential as a unit... that is, until they see her bases. Simply put, they would be a hindrance on the first map, much less halfway through the game and during a Fog of War chapter. Simply carting her across the map to receive her Guiding Ring is a hassle, much less actually attempting to use her to inflict damage and therefore gain levels. Her Accuracy is abysmal, her Constitution ensures that even Flux slows her down and her Speed and Defense will never get better with a base of 4 and 1 and growths of 30% and 20%, respectively. It can be argued that even with her slightly above average growth rates, she fails to qualify for the Est archetype, due to the fact that her growths aren't explosively high like the other Ests and due to the presence of Zeiss in Binding Blade already, who already qualifies.

With all this in mind, it's clear that only in a casual run can she be made to reach her full potential, and even then, only with an inane amount of unnecessary effort. Even once she gets up in levels and promotes, she'll still be exceeded in many stats by her main competition, Raigh, such as in HP, Speed, Skill, Defense, Constitution and even Luck. Another problem for her presents itself in the form of Guiding Rings, which are very limited in supply in Binding Blade and therefore may be spent on another character able to make better use out of them, such as Saul or Raigh. Finally, the fact remains that even if she is successfully trained, there remains the unreliability of her growths, which are necessary to get her out of her terrible start; if she does happen to be screwed, scarce stat boosters will be the only way to salvage her.

To conclude, Sophia is, unfortunately, a poor unit in every sense of the word, even qualifying for top spot amongst the worst units in the series on many lists. While with enough effort, she CAN technically be used, it certainly isn't time and cost-efficient to do so, leading the vast majority of players to bench her after her join chapter concludes.

“My future… holds no light…”
—Death Quote in The Binding Blade

After returning to Nabata, Sophia disappeared. There are no records to what happened to Nabata after the war, so no one knows how Sophia led her life from then on…

Roy With Sophia
Sophia accompanied Roy to Pherae, where they married. Although she was never very talkative, her wise decisions played a major role in the reconstruction of Lycia.

Sophia is illustrated in the trading card game with the following cards:

Sophia is Greek for "wisdom". This was the name of an early saint who supposedly died of grief after her three daughters were martyred. Sophia also appears in the phrase Hagia Sophia (which means "Holy Wisdom"), which is the name of a large basilica in Constantinople. Her name in the Japanese version, Sofiya (София in Russian and Bulgarian, Софія in Ukrainian), is a Slavic variant of Sophia. 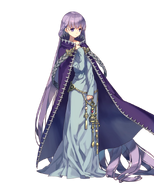 Artwork of Sophia from 《聖火降魔錄英雄雲集》. 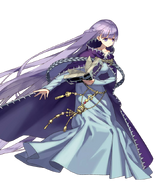 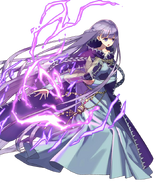 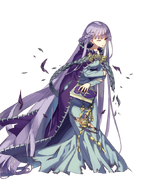 Artwork of Sophia from Fire Emblem 0 (Cipher) by HMK84.

Sophia as a Shaman in Fire Emblem 0 (Cipher).

Sophia as a Shaman in Fire Emblem 0 (Cipher).

Sophia as a Druid in Fire Emblem 0 (Cipher).

Sophia's portrait in The Binding Blade.

Sophia's portrait in The Blazing Blade.

Sophia's battle sprite in The Binding Blade as a Shaman.

Sophia performing a critical hit in The Binding Blade as a Shaman.

Sophia performing a critical hit in The Binding Blade as a Druid.
在此图库中添加照片