“Surrender? I'm the prince of Frelia. I don't know the meaning of the word. The fate of the world rides on my shoulders, and I'll make it to Jehanna. Even if I have to crawl to do it.”
—Innes being attacked in Carcino in 聖魔之光石

西尼亞斯（Innes、ヒーニアス） 是以下遊戲中可使用的角色：聖火降魔錄_聖魔之光石. He is the prince of Frelia and the older brother of 塔娜. He is famed for his immense skill with the 弓 and his tactical prowess.

During the events of the game, Innes departs from Frelia and begins to travel to Jehanna. However, while he is in Carcino, he becomes trapped in an increasingly dire situation as Pablo and his mercenaries make several attempts to kill him. Eventually, Innes tells Gerik and Tethys to leave, surrender, or flee because he thinks that they will be in his way. However, both Gerik and Tethys refuse to do so and enter the coming battle alongside him. Around this time, he is reinforced by 艾莉可 and thereafter joins her army. From this point on, he accompanies her and occasionally gives his thoughts about some of the events that occur.

Innes is extremely brash, arrogant, and proud. He also harbors an intense rivalry with 艾夫拉姆 that appears to be fueled by his own one-sided envy. However, he is actually a good and just person at heart. He is also a very capable leader, although he is not necessarily charismatic.

Regal Strategician
The prince of Frelia. Tana's brother. He's brash and arrogant, but good at heart登場作品：Fire Emblem: The Sacred Stones

As time went on, he succeeded his father, Hayden, as King of Frelia. His resourcefulness and tactical prowess helped him build a court of loyal vassals that served to lead his country to greater prosperity.

Stories tell of the sparks that flew between L'Arachel and Innes when they first met. As the love between them flourished, so too did the bond that united their two nations.

After the reconstruction of Renais, Innes challenged Ephraim to a duel. The match ended in a tie. After the fight, Eirika acknowledged her love for Innes, and the two were wed with Ephraim's blessings.

At Innes's request, Vanessa moved into Castle Frelia where she continued her duties as a knight of the realm. Thereafter, they had a child and lived happily with the blessings of all around them. 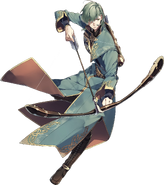 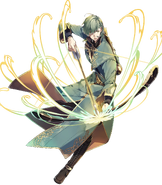 Innes as a Sniper in Fire Emblem 0 (Cipher).

Innes as an Archer in Fire Emblem 0 (Cipher).

Innes as a Sniper in the One Hundred Songs of Heroes Karuta set.