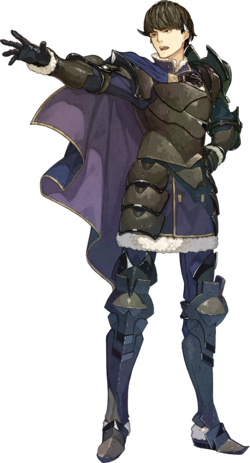 “One is born either noble or common. This destiny cannot be changed. Has a sheep any hope of leading wolves? No!”
—Berkut to Fernand

贝尔克特（Berkut、ベルクト）是出现在圣火降魔录 回声 另一位英雄王的角色。. He is the nephew of Emperor Rudolf of Rigel and a major antagonist in Alm's route.

Berkut is a noble who places great importance on social status. He guided the coup d’etat in Zofia by luring Desaix into betraying. Berkut also convinces Fernand to join the Rigelian army after leaving the Deliverance. He is vying to be the next emperor and commands the invasion of Zofia to prove his military prowess. He is also engaged to Rinea, who cares for him during the ongoing war. According to 卢卡, he is around the same age that Alm is.

Berkut first fights Alm in Chapter 3 where he faces the Deliverance alongside Fernand out of sport and in order to test their strength. Despite a tough fight for Alm, Berkut is defeated, forcing him to retreat to the Rigelian palace. Disgraced by his loss against Alm, Berkut begs Rudolf for a second chance to face Alm, this time with the Rigelian army behind him, as despite Jedah's assurance, he believes the Deliverance might be able to break past the sluice gate. Before leaving, Nuibaba offers to grant him great power through Duma to give him an edge over Alm. Seeing no honor in having to resort to a God's blessing to beat Alm, Berkut refuses. However, Nuibaba gives him a mirror, telling him to shatter the mirror if he desires power. Later, Berkut and the Regelian army meets the Deliverance just outside of the floodgates and promptly charges into battle, bent on killing Alm. He is, once again, bested by Alm. In desperation, Berkut shatters Nuibaba's mirror, causing a curse to fall over the Deliverance. Berkut is horrified by the dark magic, but Alm's pendant from Celica removes the curse and Berkut is forced to retreat once more.

Blinded by his new power, Berkut makes Rinea attack and mortally wound Fernand, who came to check on him. Later, as Alm heads down Duma Temple to claim the 法尔西昂, Berkut stands in his way. Despite Alm attempting to ask Berkut to work together to restore peace to Rigel and Valentia, Berkut refuses and is overcome by Duma's blessing. After the battle, Berkut begs Alm to kill him and end his suffering. Suddenly, Rinea appears in spirit, back in her normal appearance. Rinea continues to tell Berkut that regardless if he is emperor or not, she still loves him for the noble man he truly is deep down. Berkut, having regained his sanity, accepts her offer to look for his "empire" together, so long as he accepts her as his "empress". As Berkut is on his death throes, he hands Alm a ring, a memento of his mother, and trusting Alm to restore Valentia and make it a land led by men, rather than gods. Berkut departs into the afterlife with his beloved Rinea next to him for their new journey.

Berkut is a prideful man who, much like Fernand, places great emphasis on social status. Unlike Fernand, who acts as if he is owed something for being a noble, Berkut feels the need to demonstrate his own power and worth, subtly signifying contrast between Zofian and Rigelian ideals. Berkut tends to come off as haughty, racist, and even a bit aggressive, in the way that he talks down on others. He is very mistrustful of most people, particularly the church of Duma; he loathes and outright fears Jedah, and is extra-suspicious of religion and magic as a result.

傲慢的王子
First in line to the Rigelian throne. Prideful but loves Rinea with all his heart登场作品：Fire Emblem Echoes: Shadows of Valentia.

“Come then! Are you going to entertain me or not?”
—Act 3 battle quote

“They’re stronger than I thought… But no… I came here to be entertained, not to give up my life.”
—Act 3 defeat quote

“Only death awaits those who would profane Rigel’s soil. Consider it a mercy your bones will rest here, in sight of your homeland!”
—Act 4 battle quote

“You… You took…everything from me. You will SUFFER for what you’ve done!”
—Act 5 battle quote

Artwork of Berkut from 《圣火降魔录英雄云集》. 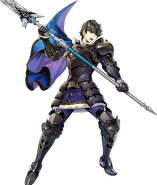 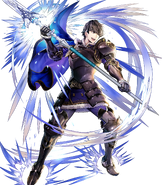 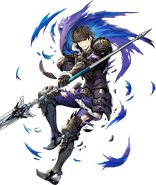 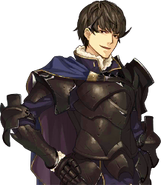 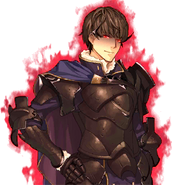 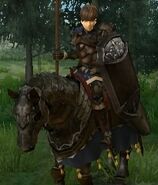