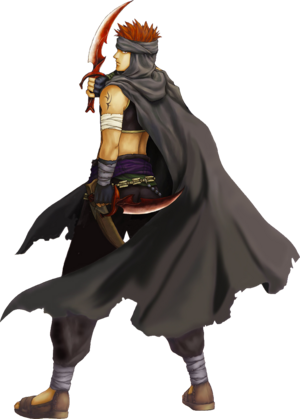 “I have no heart. I know nothing of joy, sorrow, anger, dread... And yet, I am...afraid. That I should die, that I should leave Nino alone. That frightens me.”
—Jaffar to Legault in a support conversation.

賈法爾（Jaffar、ジャアファル） 是以下遊戲可使用角色： 聖火降魔錄 烈火之劍. Known as the Angel of Death, he is an emotionless killer in the employ of Nergal until he is changed by the kindness of 妮諾, the first person he ever came to care for.

Jaffar was discovered by Nergal as an orphan, sleeping among a pile of dead bodies. Nergal took in the boy, impressed by his evident skill, and began to train him. At some point later, Jaffar was sent by Nergal to infiltrate the Black Fang, an infamous league of assassins. His natural talents, combined with Nergal's training, allowed him to rise through the group's ranks quickly. He eventually replaced Jerme, The Death Kite, as one of the Four Fangs, the most powerful members of the organization.

In 聖火降魔錄 烈火之劍, Jaffar is first seen in a cutscene in The Dread Isle (艾利烏德's Chapter 18, 海克托爾's Chapter 19). Ephidel, upon learning that a member of the Black Fang, Leila, was actually a spy for 奧利提亞, summoned Jaffar to kill her for betraying the group. Ephidel then commanded Jaffar to leave her corpse in the forest for Eliwood's army to find.

The turning point for Jaffar came when he met a young girl named 妮諾 in Four-Fanged Offense. Nino was supposed to meet up with him after a mission, but then she found Jaffar hurt and bleeding badly, and had tended to his wounds when he passed out on the floor; for his part, Jaffar had seen Nino from afar sometimes, but they had never been face to face. When he came to his senses, Jaffar asked why Nino had spared him, remembering the Black Fang's code to kill the weak so that the strong may rise; she replied that, as a fellow Black Fang, she did not want him to die. This is the first time Jaffar felt emotions, and over time he began to care for Nino.

In Battle Before Dawn (Eliwood's Chapter 26, Hector's Chapter 28), Sonia had ordered Jaffar and Nino to assassinate Prince 賽菲爾 secretly on behalf his father, King Desmond of Bern. After Nino accepted the mission, Sonia told Jaffar to stay behind for more details, telling him that after assassinating Prince Zephiel, he was to kill Nino so that the King would have a scapegoat upon which to blame the Prince's death. Jaffar openly wondered why Sonia would want to kill her own daughter, but ultimately told her it had nothing to do with him.

Jaffar and Nino infiltrate the Prince's manse, and Jaffar, upon knocking out Prince Zephiel, tells Nino it is time for her to do her part. Just before entering the Prince's room, Nino hears the Prince praying for his father to accept him so that he, his mother, his sister and his father, the King, may live a happy life. Nino cannot bring herself to kill Prince Zephiel, as this is all she wants as well, acceptance from her "mother" Sonia. Nino knows that betraying the Black Fang means death, and after explaining herself to Jaffar, she tells him that she is ready to die. She closes her eyes preparing for Jaffar to kill her when he actually tells Nino to follow him, and that they are leaving. However, while they were attempting to flee the manse, 烏爾斯拉, another one of the Four Fangs, spots them and Jaffar proceeds to fight her and her troops, telling Nino to run and that she deserves to live. He refuses her offer to run with him and makes a last stand to cover for her and protect Zephiel as well.

If you recruit Nino (talk with her using Eliwood/Hector), then she can talk to Jaffar and he would then join the group at the end of the chapter, although some among the group (particularly Hector and 馬修) did not think he should be so quickly forgiven for all of the comrades he had killed (namely Leila).

In Night of Farewells (Eliwood's Chapter 26x, Hector's Chapter 28x) Jaffar accompanies Nino in her search for her mother Sonia (as she had already learned from Ursula that Sonia was not her real mother). When Nino confronts her mother and learns her origins, Jaffar is with her, and then they are aided by the rest of the group when Sonia sends Black Fang members after them both. Afterwards, he joins the group for the rest of the journey, so that he may atone for his sins. Jaffar will also join if Night of Farewells is skipped, as long as Nino talked to him.

Description: The Black Fang's Angel of Death. Once served Nergal.

Jaffar's starting stats are so high that his low growths are easily forgivable. His pitiful Strength growth is relatively meaningless, as he only needs 1 more point to cap. HP and Defense growths aren't terrible, but he will more likely dodge oncoming attacks with his incredibly high Speed and Skill. Given that he joins the group at Level 13 promoted and before obtaining a Fell Contract, the other potential Assassins, Matthew and Legault, take quite a bit of dedication just to catch up to Jaffar, let alone surpass him, so it may be wise to leave your Thief of choice un-promoted so they may continue to Steal. Equipped with a Killing Edge, very few enemies will be able to strike Jaffar or even survive a round of combat against him, making him a valuable offensive asset.

Angel of Death
An emotionless member of the Black Fang assassins. Known as the Angel of Death登場作品：Fire Emblem: The Blazing Blade.

Jaffar, Angel of Death
Jaffar vanished in the final moments of the last battle. He still avoids the bounty hunters who seek out the famed Angel of Death.
Nino and Jaffar
They were married after the conflict and were gifted with two twin boys. Their time in Pherae was happy until bounty hunters came for Jaffar. To protect his family, he disappeared. Nino vanished in search of him.

There is a city in modern-day Israel named Jaffa, or 'Yafo'. It was an ancient Phoenician city later ruled at various times by the Israelites, Arabs, and European Crusaders. Jaffa was predominately populated by Arabs until the creation of the state of Israel in 1948 and is currently a part of the modern-day city Tel-Aviv.

Artwork of Jaffar in 《聖火降魔錄英雄雲集》. 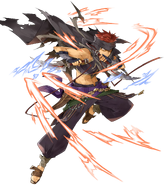 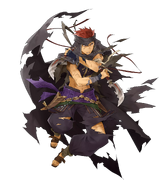 Jaffar as an Assassin in Fire Emblem 0 (Cipher).

Jaffar as an Assassin in Fire Emblem 0 (Cipher).

Jaffar as an NPC

Jaffar as an enemy in Leila's scripted death
在此图库中添加照片