Chapter 5: Beyond the Borders

“Hey. Where are you going? Come on. Over here, over here! Lord 海克托爾 said you have to stay by my side, no matter what, right? I am a sweet, helpless little cleric... You have to protect me!”
—Serra to 馬修 in The Blazing Blade

賽拉（Serra、セーラ) 是以下遊戲可使用角色： 聖火降魔錄 烈火之劍. She is a high-maintenance cleric who is a member of the St. Elimine Church, and believes she deserves praise from everyone around her. Serra is sixteen years old in 琳 story and seventeen years old in 艾利烏德's and 海克托爾's story.

Serra's past is never fully elaborated on, but it is known that she was born in Etruria, and for reasons unknown was raised in a scanty St. Elimine convent near the Etrurian/奧利提亞n frontier, where she studied the teachings of St. Elimine. During her childhood, she was greatly neglected and badly mistreated, a miserable past that would contribute to her personality later on. Eventually, she became a cleric and entered service with Ostia. Journeying to Ostia with her (less-than-enthusiastic) escort, Erk, Serra becomes entangled with Lyn's group on the border between Sacae and Lycia. Much to the displeasure of her escort, Serra joins Lyn on her quest to reunite with her grandfather. After Lundgren is killed and Caelin's monarchy restored, Serra and Erk depart, and both part ways at Ostia. If Serra is attacked and defeated by an enemy in Chapter 5, she will instead send Erk with Lyn, stating that she is too hurt to continue, staying behind alone to wait for her wounds to heal.

Serra is encountered again in Lycia, as part of Hector's group. Seeing Eliwood and his knights harassed by bandits, Hector orders her and 馬修 to stay back while he and Oswin assist Eliwood. Serra, along with Hector's group, assist Eliwood with finding the missing Marquess Pherae, lord Elbert.

Upon finishing their journey, Serra returns to Ostia and relaxes. It is unknown if she participated during the war with Bern or if she was even alive during that time.

Due to her misfortunes as a child, Serra is seen as a high-maintenance, egotistical, and somewhat cowardly cleric with a rapid tongue. In most of her support conversations, she is the main irritation for most of the characters, but for some, like Matthew, she reveals her past in the convent, hinting that her personality is just a way for her to get attention, something she longed for as a child.

Whatever happened to Serra's parents is unknown (aside of them being from Etruria), but she was raised in a small and poor St. Elimine convent near the Etrurian/Ostian frontier, where she studied St. Elimine's teachings. She eventually became a cleric and began working for House Ostia. Sometime before the beginning of the game, Serra, along with her escort Erk left on a mission for 奧利提亞, ending up entangled in 琳 and her troupe's fights and joining them.

Serra can end up with numerous male characters at the end of the game including Erk, Oswin and Matthew. In all of her support conversations, she is needy and childish at first, but later opens up and drops her princess-like facade to reveal her far more fragile psyche.

In her support conversations with Oswin, she seems to look up to him and crave for his compliments, and is driven to tears when he only harshly criticizes her for "not exceeding expectations" and seeming "distracted." Later, though, Oswin explains that he does not hate her and that he thinks she is an exceptional healer.

Erk also says hurtful things to her when he loses his patience and asks directly why is she pestering him, also making her cry since she is aware of his lack of self-care and does not want him to get hurt. Later, he also apologizes and says he wants to protect her since nobody else would put up with her.

The same scenario is said for Hector, who unintentionally hurts Serra's feelings by asking too much about her origins, and Matthew, who insults her by asking if she is actually the follower of an evil god.

She also has a rather amusing "rivalry" with 魯塞亞 in their support conversations, whereby she mistakes Lucius for an exceptionally beautiful woman and treats him with disdain and jealousy. This eventually clears up, with them becoming rather fast friends. In their A support, Lucius reveals his past to Serra and believes she will reject him for not being of noble blood, but Serra is moved to tears instead and tells him about her own sad childhood.

Description: A cleric in service to House Ostia. Headstrong and bold.

Serra, being the first Cleric and healer you encounter in the entire game, can turn out to be quite powerful, despite a bit of fraility. As a Bishop, she has good magic though it starts slow, an excellent luck growth, and has a horrendous defense, but makes up for it with a high resistance stat, making her an excellent anti-magic unit. However, 魯塞亞 usually turns out the better offensive Bishop due to his higher magic. However, with the thunder affinity (and the high critical of light magic) Serra will have a decent critical rate. Serra also fits the Lena archetype, due to her relationship with the thief Matthew.

Outspoken Cleric
Cleric who thinks less of others, more of herself. Serves Hector, brother of the Marquess of Ostia登場作品：Fire Emblem: The Blazing Blade

“Uh-oh! I think we've been surrounded! Uh...but I'm not worried a bit. I'm with you after all, Mark. We make quite a team. Right. Come on, Mark! Let's get started!”
—Serra in The Blazing Blade

“Blessed Saint Elimine, grant us the strength to win this with ease.”
—Serra in The Blazing Blade

“Ooh! Why me? This is SO annoying!”
—Serra's death quote in The Blazing Blade

Defeat Quote in Chapter 5 as a green unit 編輯

“Oooh! This is unbearable! I suppose I'll just have to lie here and play dead for a while.”
—Serra when defeated in Beyond The Borders before she is recruited

Ultimately, Erk succeeds in seeing Serra safely to Ostia. While her behavior is irritating at best, she is sorely missed. Her ascerberic tongue has become legendary.

Serra returned to Ostia. She spent much time tending to her own affairs, but lately, she has begun to enjoy her free time.

After the battle, Erk returned to his studies. His newfound feelings for Serra were an unwelcome distraction. In Ostia, Serra declared she would “live for love” with Erk, and Marquess Ostia gladly saw her off.

Serra appears as an obtainable character. Her class is Outspoken Cleric. 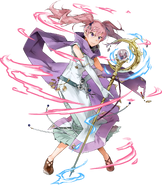 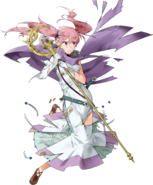 Art of 梅伊, Serra and Jemmie in Cipher second aniversary by Tetsu Kurosawa.

Serra as a Cleric by 40hara.

Serra as a Cleric in Fire Emblem 0 (Cipher).

Serra as a Bishop in Fire Emblem 0 (Cipher).

Serra as a Bishop in Fire Emblem 0 (Cipher).

Serra as a Cleric using a staff

Serra (unarmed) as a Cleric

Serra (unarmed) as a Bishop

Serra as a Bishop

Serra as an NPC
在此圖庫中添加照片