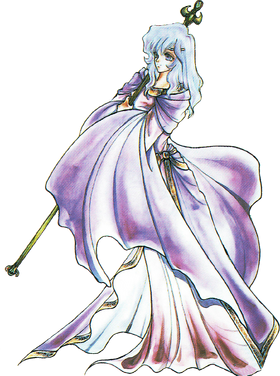 Artwork of Deirdre from the Fire Emblem: Genealogy of the Holy War .

“I was afraid I'd fall for you, Sigurd. I tried putting you out of my mind, but I... I just don't want to lose you. Oh, what am I to do...”
—Deirdre talking to Sigurd in Genealogy of the Holy War

Deirdre initially lives in a small village in the Spirit Forest of Verdane. Despite being forbidden to come into contact with men, she falls in love with Sigurd when they meet in Marpha, and later marries him after the end of Chapter 1. She gives birth to Seliph between Chapters 2 and 3, with Seliph inheriting minor Naga blood from her.

After Sigurd captures Madino Castle in Chapter 3, Deirdre attempts to join him and the others in battle, but as soon as she leaves the castle, Manfroy warps in front of her path and erases her memories. He then warps her into a convenient location for Arvis to find, intending for him to fall for her. This is done to have the duo bear a child, who will as serve a vessel of Loptyr. Some time after Arvis finds her, he falls in love with her at first sight due to her resemblance to their mother and the two are married.

After Sigurd's death, Deirdre bears Arvis's two children, the twins Julius and 尤莉亞. Several years later, Deirdre is slain by Julius after he receives the tome of Loptyr from Manfroy, which essentially causes him to lose his mind as Loptyr possesses his body. With the last of her strength, Deirdre is able to prevent Julius from killing Julia by warping Julia away to safety.

After Seliph defeats Arvis in the penultimate chapter, Deirdre's spirit appears alongside Sigurd's, and she reminds Seliph to always treasure the people around him. She is also shown to not bear hatred to Arvis for what he did to her, as evidenced by the fact that she does not express joy for the Emperor's death despite Seliph proclaiming to her that he avenged Sigurd's death.

If Verdane is not inherited by Jamke's children, Deirdre is reputed to have become a legendary and saint-like figure in said location, and is referred to as the "Holy Maiden". Upon learning that Seliph is her child, the populace requests for the kingdom to be annexed into Grannvale, which Seliph gladly accepts.

Deirdre is humble, kind-hearted, shy and naïve. This unassuming personality of Deirdre's is due to the isolation she has been put through for the most part of her life, a safety precaution put into place to prevent her from being influenced by the outside world. She is aware of her cursed blood and as such is forbidden from being with a man to prevent Loptyr's return. The Oosawa manga adaptation adds on to her personality by depicting her as being very confident in her magical abilities: When Sigurd informs her about Sandima's terrifying 地獄之炎 spell, she is shown to perk up in interest, and immediately offers to provide assistance by Silencing him.

In the same manga adaptation, while Deirdre recalls her life in the forest as being a rather peaceful one, her childhood memories reveal that she had always harbored a curiosity about the outside world and wondered what life is like beyond the boundaries of the Spirit Forest. While Deirdre is blissfully unaware of her mother's tragic life and her Lopto heritage, she is conscious of how the people around her used to view her with disdain, as if she is about to bring about a disaster of some sort.

Certain authors' notes state that Deirdre, despite never fully recovering her memories, eventually discovers that Sigurd was her first husband years after his death. She keeps her thoughts and self-guilt about this fact a secret, and never could bring herself to hate Arvis for "executing" him. When Julius attacks her under Loptyr's influence, Deirdre does not put up any resistance, as she probably wishes to meet her beloved Sigurd once again.

Lady of the Forest
She lives hidden away in the Spirit Forest. She lost the memories of her past登場作品：Fire Emblem: Genealogy of the Holy War.

Deirdre joins 西格爾特's army near the end of Chapter 1, and the two of them instantly become lovers as soon as she is recruited. She starts with some pretty good stats. Her Magic, Resistance, and even Speed are amazing for a Level 3 unit. She can immediately be of use by using the Silence Staff on the Boss of Chapter 1, making him harmless. She can similarly silence most any troublesome Magic units on the maps she is available.

However, despite her seemingly strong starting potential, Deirdre is a poor combat unit and she comes with quite a few problems. Despite higher than average overall growth, she has extremely lopsided growths that will not benefit her much in the long run. She will be nearly as useful to you at level 3 as she will be at Level 20 aside from her improved Magic allowing her to silence better Mage units. She is the most fragile unit in the entire game due to her extremely low HP, Defense, and Evasion. She can never Promote. She has no skills aside from Nihil, which is essentially useless to her. She can only ever wield her Aura tome as a weapon, which has an abysmal Weight of 20 and ruins her Evasion. Her low Movement makes it difficult for her to even engage in combat. All of these problems make it very difficult for her to engage in a combat role.

Deirdre does have some good points to her. Despite her limited combat capacity, she is capable of dealing enormous single-cast damage. Her Circlet is unique to her (and her daughter 尤莉亞) and bestows the Prayer and Renewal skill to her. She also cannot permanently die like your other units, presumably because the antagonists of the story need her alive as part of their plan. If she is defeated in battle, she will be captured by the enemy and will return to Sigurd's army after their castle is seized. This gives her some marginal use as a potential decoy.

Despite her limited usability, it can still be a good idea to try and gain her some levels to improve 賽列斯's Base Stats. She will be abducted during Chapter 3, and she is not deployable from the beginning to the chapter up until she is taken. This leaves little more than a full chapter to use and level her if you wish to. It is recommended that you sell her Silence Staff to Edain at some point and transfer her Gold to Sigurd before she is abducted in Chapter 3. While you can also sell her Aura tome for some Gold to transfer to Sigurd, nobody else in Sigurd's army can wield the tome.

In Chapter 2, Deirdre may speak to Ethlyn, resulting in Ethlyn receiving a Light Sword, which will later be passed down to Leif.

Deirdre is bound to Sigurd, thus she does not possess any love growths with any other male character in the game.

Deirdre is illustrated in the trading card game Fire Emblem Cipher with the following cards:

Deirdre is an an Irish mythological heroine who was destined to bring war and disaster. She is known by the epithet "Deirdre of the Sorrows". To avoid this, she was imprisoned. Deirdre fell in love with Naoise, a knight, but the king later executes him. Deirdre either commits suicide or dies in grief.

Official artwork of Deirdre from the Fire Emblem: Treasure artbook.

Deirdre as she appears in the TCG.

Artwork of Deidre from 《聖火降魔錄英雄雲集》 by Haimura Kiyotaka. 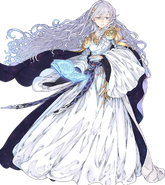 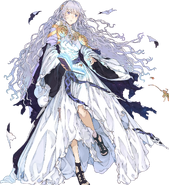 Artwork of Deidre from Fire Emblem 0 Cipher by Fuzichoco.

Artwork of Deidre from Fire Emblem 0 Cipher by Fuzichoco.

Artwork of Deirdre and Sigurd from Fire Emblem 0 (Cipher) by Rika Suzuki.

Artwork of Arvis, Deirdre and Sigurd from Fire Emblem 0 Cipher by Rika Suzuki.

Artwork of Deidre from Fire Emblem 0 (Cipher) by cuboon.

Sketch of Deirdre and 西格爾特 from Rika Suzuki's twitter.

Sigurd as a Knight Lord in the One Hundred Songs of Heroes Karuta set (with Deirdre in the background as a ghost).

Deirdre meeting Sigurd for the first time in the Oosawa manga adaptation.

Deirdre, as she appears in the first series of the TCG as a Level 1 Light Priestess.

Deirdre, as she appears in the first series of the TCG as a Level 10 Light Priestess.

Deirdre, as she appears in the Anthology series of the TCG as a Level 15 Light Priestess.

Deirdre as a Light Priestess in Fire Emblem 0 (Cipher).

Deirdre as a Light Priestess in Fire Emblem 0 (Cipher).

Deirdre as a Sage in Fire Emblem 0 (Cipher).

Deirdre as a Sage in Fire Emblem 0 (Cipher).

Deirdre's portrait in Genealogy of the Holy War.

Deirdre's portrait as a ghost