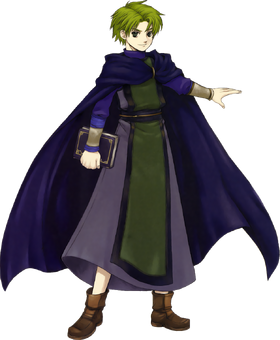 “I want to protect those I hold dear, and destroy all those who oppose me. That's the power I seek.”
—Raigh to Niime in a support conversation in The Binding Blade

雷伊（Raigh、レイ） Rei, Lleu 是以下遊戲中可使用的角色：聖火降魔錄 封印之劍. He is a Shaman and the twin brother of Lugh. He is sarcastic, rude and cynical, the opposite of his brother. Despite his rude behavior to all the people around him, people like Lugh and 蘇菲亞 say that he is really a good person at heart and is just hiding it. He is on relatively good terms with Chad despite his departure from the orphanage. His dream is to make dark magic more known throughout Elibe and to study ancient magic, joining Roy's army because it may help with his dream.

He is the second playable Dark Magic user in the Fire Emblem series, following Salem.

Raigh is the son of 妮諾 and the identical twin of Lugh. The difference in looks between the twins is their eyes. Lugh's eyes are softer like Nino's, while Raigh's eyes are harder, possibly a trait from Jaffar. He is rough around the edges, rude, and overall mordant, having been raised in an orphanage in Araphen alongside his brother and Chad. After hearing that the father was slaughtered and that Bern charred said orphanage to the ground, Raigh pretends to be standoffish to the fact and while he exclaims that he does not care what happens to the orphanage or the orphans, Lugh insists that it is merely a barrier and that he is truly lighthearted and caring by nature.

Dark Child
Wielder of dark magic. A scornful loner with a troubled past as an orphan登場作品：Fire Emblem: The Binding Blade.

Speak to him in chapter twelve with either Lugh or Chad.

Raigh is the first shaman you receive. He has very good starting stats for his level and good growth rates as well. He will easily max Skill, and will likely almost max Speed and Magic also. Though his Speed stat will be fairly high, it is lowered by his extremely low constitution. With dark tomes being so heavy, he will never be as fast as his stat suggests. Also, his evade is not great due to his poor Luck (although he is a good candidate to give a Goddess Icon and Body Ring). His avoid is sub-par, and his Defense is similar to Sophia's at equal levels. However, he is easier to train than Sophia, though both have their merits.

Raigh traveled around the world, honing his dark magic skills. Although dark magic had been all but forgotten, Raigh's efforts brought it back to people's awareness again. He was known for being hard on both himself and others, but for some reason he was generous towards deprived children.

Raigh is illustrated in the trading card game Fire Emblem Cipher with the following cards:

The Japanese transliteration of Raigh's name, "Lleu", comes from the Welsh mythlogical figure Lleu Llaw Gyffes, who was born when his mother, Arianrhod, was running for the door after giving birth to Dylan Ail Don during a magical virginity test and is raised by Arianrhod's brother Gwydion. When presented with the child, Arainrhod places a tynged, similar to a curse, on him that only she could name him, which Gwydion tricks her into doing, as well as later tricking her into arming him to counter a second tynged, and making a wife out of flowers to counter a third. He is considered to be the equivalent of the Irish Lugh.

The change in his name in Fire Emblem Awakening was likely due to pronunciation - The Welsh ll (ɬ) sound is very difficult to pronounce for most native English and Japanese speakers so it might have been a pragmatic choice to translate according to the Japanese pronunciation towards a variation of a common English Language name rather than try to maintain the intent and pronunciation of the original word. 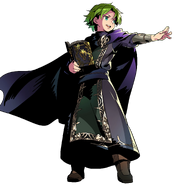 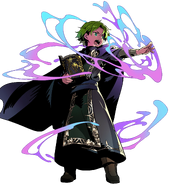 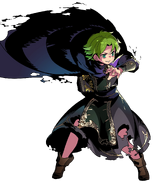 Raigh as a Druid in Fire Emblem 0 (Cipher).

Raigh as a Druid in Fire Emblem 0 (Cipher).

Raigh's appearance in Hasha no Tsurugi.

Raigh's portrait in The Binding Blade.

Raigh as a Shaman in The Binding Blade.

Raigh as an enemy in The Binding Blade.

Raigh as a Druid in The Binding Blade. 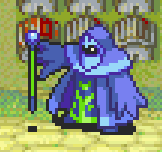 Druid Raigh with a staff in The Binding Blade
在此图库中添加照片