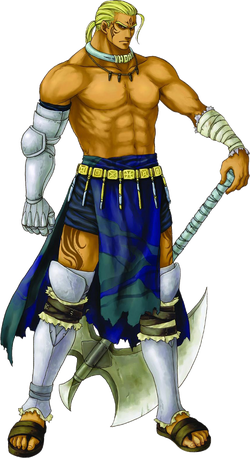 “But I have no regrets. I have served my master, married a wife, and fathered a child. I was also blessed with friends like you and Lord Pent. All that remains is to fulfill my destiny.”
—Hawkeye to Louise in a support conversation

霍克艾（Hawkeye、ホークアイ）是以下遊戲中可使用的角色：聖火降魔錄 烈火之劍. He is gruff and quiet, but is extremely loyal to Pent and Louise.

Hawkeye's history remained relatively unknown, although it is speculated that, ever since his childhood, he was trained to be protector of the Nabata Desert, as he did later to his daughter Igrene even after the death of his wife. During his time as Guardian of the Desert, he met the Archsage Athos, as well as Pent and Louise. Eventually, he would meet 艾利烏德, 海克托爾, and their group, traversing the desert to find the "Living Legend". He would join them after speaking to either Eliwood and Hector and traveled with them for the rest of their quest.

It is Hawkeye who is in possession of the first Heaven Seal, having received it from Athos, but since he is unsure of what to do with it, he gives it to Pent for safe keeping. Hawkeye does not appear in any cutscenes after this point.

After the war with Nergal, he returns to his desert, while he remains its guardian for the rest of his life, he focuses the autumn of his life on his daughter, Igrene who will inherit the desert and all its secrets when he dies.

Since Igrene is the Guardian during the War on Bern, it is more than likely that Hawkeye is deceased at this point in time.

Hawkeye is best described as quiet and introverted, speaking little to most of his companions. However, to Pent and Louise, he speaks his mind more often, but is usually reserved from most of his companions, an exception being 尼尼安, who resembled his daughter slightly. His personality is highly comparable to that of Volug's, both are distant, emotionless, vicious desert warriors, dedicated to duty, and rarely speak to those that they don't tolerate, though in Hawkeye's case he is very gentle and kind to others.

Description: The protector of Nabata. A mysterious air surrounds him.

Hawkeye's most notable stat is his HP, though he tends to be just off capping it. Despite this, he has lower growth rates than Dart, and fewer support options, although he does tend to have higher Resistance on average. Regardless, if you are in need of an axeman, Hawkeye can do the job. Just be wary that he needs some form of boost to his hit and avoid.

Desert Guardian
Guardian of the Nabata Desert and Arcadia, where dragons and humans live in harmony登場作品：Fire Emblem: The Blazing Blade.

“...I, too, will join you in this final glory.”
—Final Chapter Quote

Hawkeye returned to Nabata and lived peacefully in Arcadia with his daughter, whom he trains to be guardian of the desert.

Artwork of Hawkeye from 《聖火降魔錄英雄雲集》. 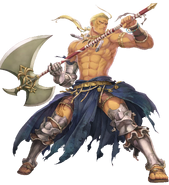 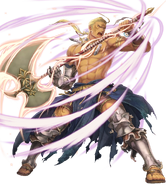 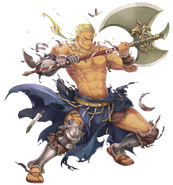 Hawkeye's portrait in The Blazing Blade.

Hawkeye as an NPC.
在此图库中添加照片