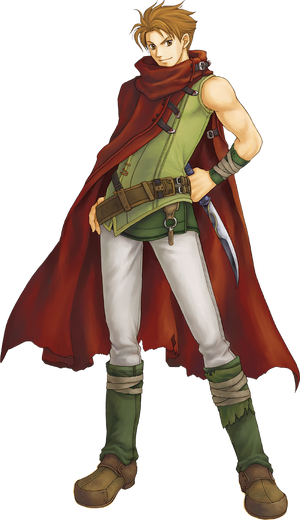 “Disguise yourself, get close to the enemy... I am familiar with these duties”
— Matthew talking to Legault in a support conversation

馬修（Matthew、マシュー）是以下遊戲中可使用的角色：聖火降魔錄 烈火之劍. He first joins Lyn as an enigmatic thief, and is later revealed to be a spy for 奧利提亞. He was in a relationship with Leila before her death at the hands of 賈法爾.

Matthew is first seen in Chapter 6: Blood of Pride, where he spectates the battle in a residential house in Araphen. In an unfortunate set of circumstances (which he twists to his advantage), he is visited by the Sacaen lord 琳, and quickly unites with her forces to pilfer from the enemy side and Araphen's treasuries. At the end of the chapter, he becomes a permanent addition, though to a minimal chagrin from few.

His next notable appearance is in Chapter 7: Siblings Abroad. If he visits the house to the southwest, he reports to his lord Hector (who is currently waiting for his fellow friend 艾利烏德) that Lundgren's motives are far too ambitious and could be a threat to Ostia if left unchecked, leaving Ostia neutral in the conflict. Hector thanks Matthew for this knowledge.

His final appearance is in Chapter 8: Vortex of Strategy, where he temporarily leaves the group to gather Intel from the surrounding villages. He returns with grim news: Lundgren, Lyn's evil granduncle, has petitioned for aid for disposing of Lyn and her "traitorous" group of knights. Lyn thanks Matthew for this advice and they push forward to Caelin.

At the end of Lyn's Story, he mysteriously disappears, an enigmatic past left in his wake.

In Eliwood's Story and Hector's Story, Matthew returns, his allegiance with Ostia no longer a secret. He greets the Tactician warmly, admitting his true colors. He then joins Eliwood in his quest to search for the missing Marquess Pherae: Lord Elbert.

During this quest, in Chapter 16: Whereabouts Unknown, he crosses paths with his lover and acquaintance Leila, who had conscripted herself into the Black Fang, and passes on juicy info about Nergal and his morphs, as well as the status of Elbert and Darin. Matthew proposes that she meet his parents, then quickly leaves before she can even respond.

Matthew's final notable appearance in the game is in Chapter 18/19: The Dread Isle, where he stumbles upon the mangled body of Leila. He gives her a proper burial, then rejoins the party, sardonically commenting that he was going to talk her out of the spying business and probably propose to her later, and silently swearing vengeance on Leila's murderer.

After Nergal's death, Matthew resumes his service as a spy of Ostia, motivated by the memory of his beloved Leila. Alternatively, he will develop feelings for Serra despite her eccentric tongue and eventually fall in love and marry her, her presence slowly easing the pain of losing Leila.

Despite this, it is unknown if he was alive during the War on Bern and if he was, how involved he was with the war.

Alternatively, if Matthew dies before Chapter 19: The Dread Isle, Hector regrets letting him die, but promises to continue on with his journey. When Leila dies, Hector promises to bring her body back to Lycia to be buried next to Matthew.

Matthew's demeanor is cheerful and optimistic at best, rarely ever set back by the current situations at hand. He usually tends to give sarcastic and joyful responses to most threats and conversations thrown at him, though he has his slip ups in personality. He doesn't give an effort to hide the annoyance and grief he is caused because of Serra's presence. He also is aggressive and overreacts to Jaffar admitting the murder of Leila, even attempting to kill the assassin and threatening Jaffar with the life of 妮諾 before he eased his grief, knowing that Leila wouldn't enjoy having her death avenged in such a way. Despite his happy outlook on life, he can be serious and solemn on matters, such as Leila's funeral and reporting Lundgren's influence on Caelin to Hector.

As with all Thieves and Assassins, Matthew will easily cap Speed and also possesses slightly subpar Skill but good Luck, but his Luck and Skill bases are rather low. Still, his potential in Speed and Luck is usually good enough that he is rarely put in danger from attacks, direct or otherwise. The biggest problem Matthew suffers from, like most units of this class, is Strength and, as he himself states in a support with 賽拉, he "Does not get into brawls." He also promotes very late, as the Fell Contract is not available until Chapter 26xE/28xH.

Faithful Spy
Happy-go-lucky spy who's actually quite sly. Serves Hector, brother of the Marquess of Ostia登場作品：Fire Emblem: The Blazing Blade.

Before chapter "The Dread Isle"编辑 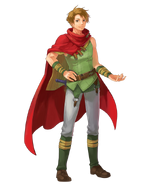 Matthew as he appears in 《聖火降魔錄英雄雲集》. 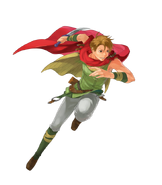 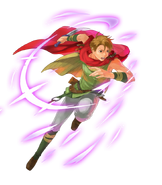 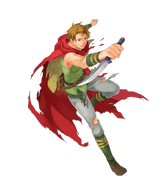 Artwork of Matthew in Fire Emblem 0 (Cipher) by Misei Itou.

Matthew as a Thief in Fire Emblem 0 (Cipher). 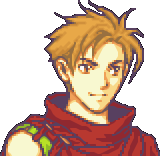 Matthew as a Thief

Matthew as an Assassin
在此图库中添加照片